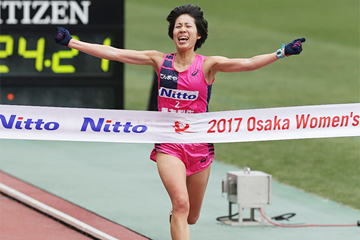 It was second fastest performance of the 29-year-old’s career, less than a minute shy of her 2:23:23 set in Osaka five years ago in her only other marathon victory. Then, her victory clinched a berth on the Japanese squad for the London Olympics; this time her win could mean a return to the British capital as a member of the squad for the IAAF World Championships London 2017.

“Running in the closing stages of the race, all I could think was to give everything I had,” Shigetomo said during a post-race television interview with 2000 Olympic champion Naoko Takahashi. “I am happy to have run well all the way to the finish today. For a while I was not sure if I could even start today’s race.

“When the pace suddenly increased (at about 13 kilometres),” she continued, “I was surprised to see such a big gap open up in front of me because I was not feeling bad at that point. Then at about 17 or 18 kilometres, I started to regain my running rhythm.”

When Flomena Cheyech Daniel, the final pace maker, covered the 14th kilometre in 3:17, only Misaki Kato, Horie and Kaori Yoshida were able to maintain contact. When Cheyech departed after reaching the half in 1:11:46, the trio formed the lead pack, with Yoshida pushing the pace from the midway point. Kato began to drift back as she approached 25 kilometres where Horie took over the lead. Back-to-back kilometre splits of 3:23 and 3:17 dropped Yoshida.

Shigetomo moved into second by the 29th kilometre and began cutting into Horie’s lead. Twenty-one seconds behind at the 31st kilometre, she reduced the gap to six seconds by the 35th. Just 500 metres later, Shigetomo moved to the front for good.

Although she slowed near the finish, she won comfortably in her 10th marathon start, her fifth in Osaka.

Shigetomo now has to wait until the second Sunday in March when the Nagoya Women’s Marathon, the final qualifying race for the Japanese squad, will be held to see if she has earned her ticket for a return engagement in London. Selection would be a redemption of sorts for Shigetomo who, slowed by an untimely injury, finished a distant 79th at the London 2012 Olympic Games.

“I have to accomplish something in every marathon and so at least I got my personal best today,” said Horie, who notched a second consecutive marathon lifetime best.

Hanae Tanaka, running in her first competitive outing over the distance, was third in 2:26:19. Tanaka ran the Kakogawa Marathon in December as a long training run leading up to today’s race, clocking 2:42:23.

Serena Burla of the US, who underwent cancer treatment in 2010, ran a strong second half to finish fourth in 2:26:53, an improvement of more than a minute on her previous 2:28:01 lifetime best set at the 2013 Amsterdam Marathon.

Further back, Shitaye Eshete Habtegebrel of Bahrain, one of the pre-race favourites, was fifth in 2:28:36, ahead of Japanese Risa Takenaka and Iwona Lewandowska Bernardelli of Poland, who clocked 2:28:44 and 2:29:37, respectively.