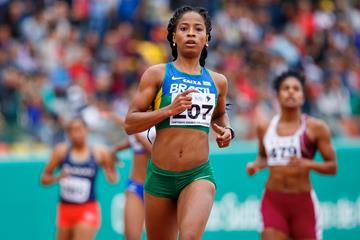 Brazil remained the dominant force at the 51st edition of the South American Championships that concluded on Sunday (26) at the Estadio de la Videna in the Peruvian capital Lima.

Brazil topped the table with 44 medals (15 gold), while Colombia presented a strong challenge with 32 medals (12 gold), just ahead of Venezuela with 13 (eight gold).

Brazilians produced two victories in the final day. Vitória Cristina Rosa delivered her third gold medal of the event by taking the 200m in 22.90 (win 0.8), a season’s best. Earlier, the 23-year-old won the 100m and the 4x100m relay. Rosa, world ranked No.12 and the 2017 South American champion, entered the home straight even with Venezuela’s Andrea Purica (second with 23.37), but pulled away to produce a comfortable victory.

“Vitória is maturing,” said her coach Katsuhico Nakaya, a former sprinter himself. “She is still a young athlete with the potential to continue to evolve. She is getting good results and that’s giving her more confidence. We are hoping that she will be able to run more at the European circuit.”

Five titles for Colombia on day 3

Yet, Colombia was the strongest nation at the final day. The ‘cafeteros’ obtained five victories on Sunday, brought by Bernardo Baloyes, Jhon Alexander Castañeda, María Fernanda Murillo and both 4x400m relays.

Baloyes, 2018 Central American and Caribbean Games and world ranked No.6, triumphed in the 200m with a championship record of 20.42 (wind -0.7), beating the 20.44 mark set 30 years ago by Brazilian Róbson da Silva in Medellín. Baloyes, 25, retained the title he had won in 2017 in Asunción displaying very good form, after clocking 20.08 at the Brazilian stage of the IAAF World Challenge in Bragança Paulista. Brazilian Rodrigo do Nascimento was second with 20.63, while Paraguay’s Christopher Ortiz took the bronze (20.98), winning the first ever medal at the distance for his country and the only one at these championships.

Murillo, high jump bronze medallist at the 2018 World U20 Championships, brought another medal to Colombia, her second at the South American Championships, with her winning leap of 1.90m.

Venezuela continued its solid competition adding three gold medals on Sunday. Lucirio Garrido completed the 800m/1500m double by taking the victory over two laps in 1:46.27. The 26-year-old Garrido set a solid pace of 51.1 at 400m and never relinquished the lead. The last Venezuelan to win the 800m was Héctor López, at Santiago de Chile, in 1974.

Argentina entered the last day without a gold medal. But María Florencia Borelli and Maximiliano Díaz delivered a pair with victories in the 5000m and triple jump. The 25-year-old Borelli ran a good race behind Colombian Carolina Tabares and Peruvian Luz Mery Rojas, and her last kilometre in 3:01.5 was decisive to bring her the victory with a national record of 15:42.60, the first gold by an Argentine at the distance. Tabares was second with 15:46.04 and Rojas third with 15:46.27.

And the last field event produced the sixth championship record of Lima 2019. Chilean Gabriel Kehr, world ranked No.18, took the victory in the hammer throw with 75.27m to deliver his country’s only gold medal of these championships. Humberto Mansilla, also Chilean, was second with 73.00m, while Brazilian Allan Wolski was third with 72.51m. The last Chilean to win the Hammer was Alejandro Díaz in Montevideo, in 1958.

Twelve of the 13 ConSudAtle member federations obtained medals in Lima, which hosted its ninth South American Championship in great fashion. The city is preparing for the upcoming Pan-American Games with the athletics events set to take place from 6-11 August on the same track.