Saint Lucia's Levern Spencer and Trinidad and Tobago's Keshorn Walcott were the standout performers at the 23rd Central American and Caribbean Games in Barranquilla, Colombia on Thursday (2), a day that Cuba added four gold medals to its tally.

Spencer was the only jumper in the 13-woman final to clear 1.90m to claim a third title after victories in the 2010 and 2014 editions of the Games.

“I loved this meet and representing my country. I am thankful I was healthy to jump this high today and to win three gold medals,” said Spencer, who took over from Dominican Republic's Juana Arrendel, a three-time champion as well in 1998-2006.

Walcott collected the first CAC title of his career after a final round effort of 84.47m, less than half a metre shy of the Games record of 84.91m, set by Cuba's Guillermo Martinez in 2010.

The 2012 Olympic champion opened with 81.78m, fouled on this second attempt and passed in rounds three and four to recover from a nagging pain.

But after Anderson Jamal Peters of Granada took the lead with a fourth round effort of 81.80m, the 25-year-old responded with his winning throw in the sixth.

"I just wanted to add another title. I didn’t get to go to the Commonwealth Games this year. And since I’m missing the CAC title, I said I might as well add it. It's just my will to win,” he said.

World Championships finalist Cristian Napoles extended Cuba's hegemony in the men’s triple jump with a personal best of 17.38m in the opening round. His countryman Jordan Diaz responded with 17.27m and followed with 17.29m, but that was enough to overtake Napoles as Cuba enjoyed a 1-2.

“Knowing the rich history our sport in the Games, I wanted to contribute to my country’s medal crop. This is a great boost for my career and there is more to come from me,” said Napoles, who was followed by Diaz and Surinam's Miguel van Assen with a new national record of 16.96m.

Napoles led a productive session for Cuba as they added four victories, including the men's pole vault where defending champion Lazaro Borges and Colombian Walter Viajara both cleared 5.30m to share gold.

In the process Almanza became the only athlete to win three athletics golds following her victories in the 800m and 1500m.

The Dominican Republic and Costa Rica each clocked national records, 3:33.64 and 3:40.23, respectively.

In the men's race, Yoandys Lescay held off Colombia and the fast finishing Dominican Republic to defend the crown won in 2014. Raidel Rojas, Adrian Chacon and Leandro Zamora were also on the squad.

The host nation enjoyed two victories with Gerard Giraldo, the first Colombian to win the 3000m steeplechase, joining Viafara as a gold medallist. 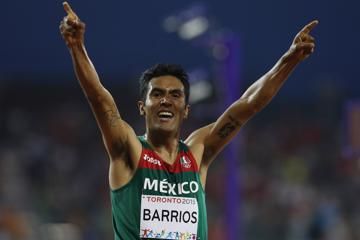 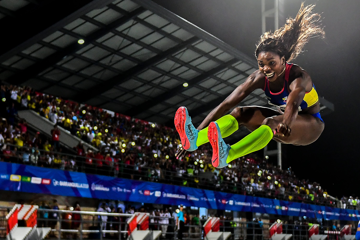 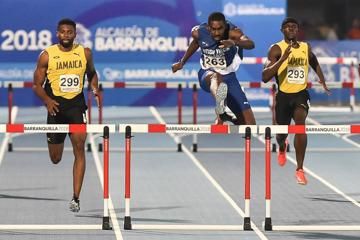 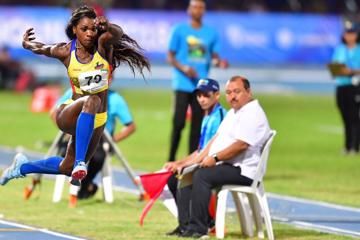 Ibarguen and Arevalo shine in golden day for ...