The highlight of the fourth and final day of the Texas Relays in Austin on Saturday (31) was a pole vault competition in which Renaud Lavillenie, Shawn Barber and Armand Duplantis all cleared 5.92m.

Competing in his first competition since winning his third world indoor title earlier in March, Lavillenie came away with the victory on countback. But the world record-holder was pushed all the way by 2015 world champion Barber, whose one miss at 5.82m was the only thing that separated the duo.

Duplantis, meanwhile, opened at 5.47m before clearing 5.72m on his first attempt. He skipped 5.82m and then got over 5.92m, a world U20 record (pending ratification) on his third try.

The last time three men vaulted 5.92m or higher in the same competition was back in 1999.

The university string competition was also of high quality as Chris Nilsen and Devin King both cleared 5.80m with the former winning on countback.

World indoor record-holder Jenn Suhr dominated the women’s pole vault. She entered the competition with a first-time clearance at 4.60m, the final height that the last of her opponents managed to successfully negotiate. Suhr then cleared 4.70m at the first time of asking and negotiated 4.83m on her second try before ending her series with three misses at 5.01m.

Nigeria’s Blessing Okagbare showed that her recent African 200m record of 22.04, set last weekend in Abilene, was no fluke as she sped to victory in the 100m.

The wind, as was the case with most sprints at the Texas Relays, was over the allowable limit. Nevertheless, her 10.72 (2.7m/s) clocking is the fastest time ever recorded by an African woman under any conditions. She won comfortably from 2017 NCAA champion Mikiah Brisco (10.99).

Elsewhere, Tori Franklin shot up to second on the US all-time list by winning the triple jump with 14.48m (1.0m/s). World University Games champion Reggie Jagers added three metres to his discus PB with a winning distance of 65.46m. Jarvis Gotch leaped a wind-assisted 8.20m (2.4m/s) to win the long jump and Rushelle Burton won the 100m hurdles with a wind-assisted 12.64 (3.3m/s). 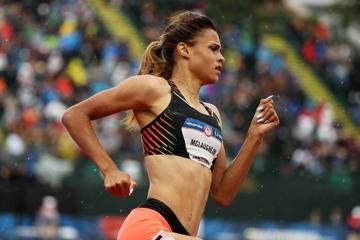