Belgian decathlete Thomas van der Plaetsen successfully defended his title at the World University Games in the Korean city of Gwangju on Thursday (9) in a competition which came down to the final event.

Part of the IAAF Combined Events Challenge, the decathlon began on Wednesday with Canada’s James Turner winning the 100m in a PB of 10.86 while Van der Plaetsen had an inauspicious start to his campaign with 11.34, putting him at 16th of 18 competitors after one event.

But things soon began to look up for the world indoor bronze medallist. Although he was disappointed with his leap of 7.08m in the long jump, it was enough to move up to third place overall. Turner extended his overall lead, having jumped 7.15m and again producing the best mark of the field.

It was then Jeremy Lelievre’s turn to lead. The French all-rounder unleashed an outdoor PB of 15.21m to take pole position by more than 100 points. As the only other man to throw beyond 15 metres, compatriot Bastein Auzeil ended the third event in second place overall.

Van der Plaetsen managed 13.75m in the shot, his second-best ever within a decathlon, and then moved up the rankings into second after clearing 2.10m in the high jump. Germany’s Rene Stauss, who topped the high jump with 2.13m, had crept into the lead after four events.

A 14.59 clocking in the 110m hurdles – just 0.14 off his PB and his fastest ever within a decathlon – was enough for Van der Plaetsen to move into the lead for the first time in the competition. Stauss, meanwhile, slipped to fourth behain Lelievre and Auzeil after running just 15.69 in the first event of the second day.

The German returned to the top of the standings after throwing 45.00m in the discus, 3.15m farther than Van der Plaetsen managed. But the 2011 European under-23 champion had his best event yet to come.

The 24-year-old was the last one left in the pole vault. Pushed by Auzeil, who cleared 5.10m, Van der Plaetsen got over 5.20m to bank 972 points, the most secured in any event by any of the decathletes during the competition in Gwangju. Van der Plaetsen regained the overall lead, but Auziel was just 60 points behind and on paper was closely matched to the Belgian in the two remaining events.

Auziel threw 60.55m to Van der Plaetsen’s 60.00m in the javelin, closing to within 52 points of the lead with just the 1500m left to go. It meant that Van der Plaetsen had to finish within eight seconds of Auzeil to hold on to his World University Games decathlon title.

Lelievre crossed the line first in the 1500m, clocking 4:37.12, while team-mate Auziel followed some 11 seconds later. Keeping a close eye on what was happening, Van der Plaetsen finished just two seconds behind Auziel to win the overall title with a score of 7952.

Auziel ended just 39 points in arrears, scoring 7913, while Stauss maintained his third-place position during the final three events to take bronze in 7791.

It may have been his lowest decathlon score since 2010, but that mattered little to Van der Plaetsen, who became just the third man in history to win back-to-back decathlon titles at the World University Games.

A lot has happened since winning his first title in Kazan two years ago. He improved his decathlon PB of 8255 to finish 15th at the 2013 IAAF World Championships and then broke his own Belgian indoor heptathlon record to take bronze at the 2014 IAAF World Indoor Championships with 6259.

But later that year, he was diagnosed with testicular cancer. He underwent treatment throughout the winter as athletics took a back seat. After being given the all-clear earlier in 2015, he gradually increased his training load and returned to competition in May.

“The past month has been really tough, there was a lot of doubt and it was just in the past month that I started getting used to the intensity of the training,” said Van der Plaetsen. “In April and May I was barely getting through a single training session.”

After a few low-key competitions, Van der Plaetsen felt ready to defend his title at the World University Games. With the qualifying standard already under his belt thanks to his 8184 performance in Gotzis last year, Van der Plaetsen will now turn his attention to the IAAF World Championships.

"I now want to perform consistently and keep on fighting after the period I went through."

BACK
Pages related to this articleAthletes
Thomas VAN DER PLAETSEN 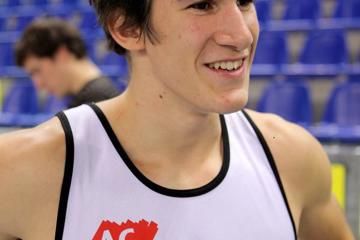