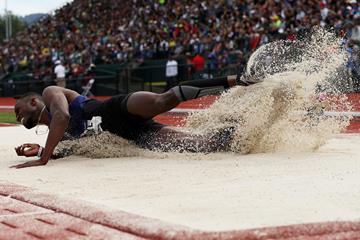 World indoor triple jump champion Will Claye produced the third-best result in history to win at the Jim Bush Track and Field meeting in Long Beach, California, with a stunning leap of 18.14m on Saturday (29).

The 28-year-old, contesting just his second meeting of 2019, bounded out to his winning mark in the second round of the competition with what was his only valid jump of the series. Chris Benard was a distant runner-up with 16.71m.

The world and Olympic silver medallist had opened his season with a 17.40m victory in Baie-Mahault last month, but there was little sign that he was ready to better his lifetime best of 17.91m so soon and become just the sixth man in history to surpass 18 metres.

The only men ever to jump farther are world record-holder Jonathan Edwards (18.29m) and Olympic champion Christian Taylor (18.21m).

Earlier in the afternoon, he had won the long jump with 8.21m (1.5m/s), his best performance in that event since 2012, the year in which he won medals in both horizontal jumping disciplines at the London 2012 Olympic Games.