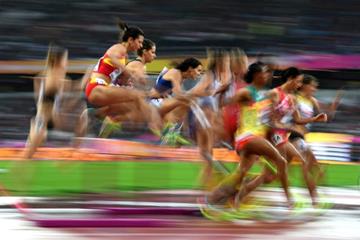 Ethiopia’s Sofia Assefa, a silver medallist here at the London 2012 Games and a bronze medallist a year later at the IAAF World Championships in Moscow, was the highest profile casualty women’s 3000m steeplechase heats that saw all the main contenders for gold progress to Friday night’s final.

Beatrice Chepkoech of Kenya was the fastest qualifier, clocking 9:19.03 to earn a marginal win over the world record holder and Olympic champion Ruth Jebet, who recorded 9:19.52. Kenya’s 18-year-old prodigy Celliphine Chespol, who set a world U20 record of 8:58.78 in winning at the IAAF Diamond League meeting in Eugene, won her heat in 9:27.35, just ahead of the US bronze medallist from Rio, Emma Coburn, who clocked 9:27.42.

Kenya’s defending champion Hyvin Kiyeng Jepkemoi also qualified safely as she ran 9:39.89 to finish second in her heat behind Germany’s Gesa Krause, who won in 9:39.86.

Jepkemoi was happy to go along with a sedate early pace in the opening heat. The runners went through 1000m in 3:18.99 – barely inside 10 minute pace. The same applied at 2km, which the field, led by Morocco’s Fadwa Madane, passed in 6:35.

The race proper began at the bell as Jepkemoi and Assefa moved up. The final water jump saw Madane leading, but she was passed in the final straight by four – Krause, Jepkemoi, Colleen Quigley of the United States, who recorded 9:40.07 but was subsequently disqualified, and Kenya’s 2014 Commonwealth champion Purity Kirui, who took the third automatic qualifying spot in 9:40.53.

Neither Madane and Assefa made the final cut, paying for the slow opening speed.

By contrast, the second of the three heats was a more brisk – if equally wet – affair, as Chepkoech began swiftly, breaking away from all but the diminutive figure of Bahrain’s former Kenyan, Jebet, whom she beat in their last meeting at the IAAF Diamond League meeting in Paris.

On that occasion Jebet was in the same position, on Chepkoechs’s shoulder, when she came to grief at the water jump with just over three laps to go. There were no such slips here.

Their 2km time was 6:08, and there was – not surprisingly – a significant gap to the nearest chaser, Courtney Frerichs of the United States.

Both leaders had a look over their shoulder after negotiating the water jump for the last time and moved smoothly home, with Frerichs making certain of progression in 9:25.14.

The field for the third semi-final, stood shivering in driving rain and looked grateful to move into action.  At the bell, Chespol led from Coburn, with third place being disputed by Genevieve Lacaze of Australia and Winfred Yavi, another Bahrain runner who, slight and with cropped hair, looked uncannily like her team-mate Jebet.