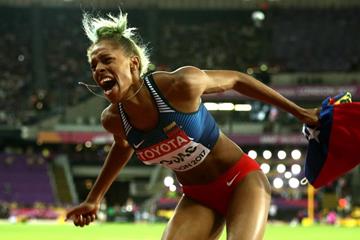 It was, as expected, the fiercest battle of these championships thus far, one that came down to the final jump. In the end it was Yulimar Rojas, the young challenger to the throne, who prevailed, ending Caterine Ibarguen's quest to become the event's first three-time champion.

The battle was ferocious, with the pair from neighboring South American countries --Ibarguen from Colombia and Rojas from Venezuela-- exchanging the lead almost round-by round from the outset.

Rojas took the early lead with a 14.55m in the first round, but just minutes later, Ibarguen, jumping immediately after the world indoor champion, took command with a 14.67m leap. Rojas responded in kind in the next round, taking over with a 14.82m lead. Ibarguen improved but only by two centimetres, to remain in silver medal position.

Rojas's momentum continued in round three, padding her lead by a centimetre to 14.83m. Fueled by the competition and the vociferous crowd support and interest in their battle, Ibarguen responded again with a 14.89m season’s best leap to take the lead by six centimetres.

Rojas lost her rhythm in round four and didn't improve, while Ibarguen kept up the pressure, sailing to a solid 14.80m effort.

But the 21-year-old Venezuelan wasn't finished. Bounding down the runway on her penultimate leap, she landed close to the 15-metre line with a 14.91 lead to retake the lead yet again. Ibarguen followed with 14.71m. Visibly tiring, Rojas ended with a 14.50m leap and retired to the sidelines where she and the crowd of more than 50,000 spectators watched Ibarguen's final leap.

Not surprisingly, it was oh-so-close, the Colombian breaking the sand 14.88m from the board. The women's triple jump has often been decided by a handful of centimetres at the World Championships, but never by just two.

"The last attempt by Caterine was hard for me," Rojas, who defeated Ibarguen earlier this season, admitted. "I feared her last attempt, I was afraid that I could lose my gold medal there. But fortunately that did not happen."

Before London 2017, Venezuela never won a World Championships medal. Rojas's is now the second, following Robeilys Peinado's bronze in the pole vault yesterday. "This is a great victory for my country," she said. "I am so proud about this gold medal. My family, my friends and my country - I made them proud and full of joy."

Despite coming up on the short end of the event's closest finish at a World Championships, Ibarguen was also pleased.

"I am super happy and satisfied with my silver medal. I felt at ease during the competition. I tried to overtake Yulimar with my last jump but it did not work."

Her silver, the second in her World Championships collection, upped her tally to a record four in the event.

The battle for bronze wasn't nearly as close, with Kazakhstan’s Olga Rypakova, the 2012 Olympic champion, collecting her third world championships medal --after silver in 2011 and bronze in 2015-- with a 14.77m season's best.

Further back, Hanna Knyazyeva-Minenko of Israel was fourth at 14.42m, also a season's best. Kristen Gierisch of Germany was fifth, reaching 14.33m.