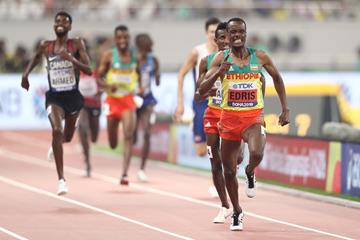 Had it not been for the fact he had a wild card entry as the defending champion, Muktar Edris most likely wouldn’t have even made it to Doha.

The Ethiopian was ranked just 17th in his country this year for the 5000m. He had two appearances on the IAAF Diamond League circuit this year, finishing 11th in Oslo over 3000m and 18th in Lausanne over 5000m. Before that, he had failed to finish the 10,000m at the Ethiopian Championships.

But his wild card entry meant that Edris could defend the title he won in 2017 when he ended Mo Farah’s streak of world titles. After winning here in Doha, the 25-year-old has kick-started a winning streak of his own at the World Athletics Championships.

From the outset it was clear that Edris and his Ethiopian teammates – Selemon Barega and Telahun Haile Bekele – were utilising team tactics to their advantage in their quest to beat the likes of Paul Chelimo of the USA and the Ingebrigtsen brothers of Norway.

Edris went straight to the front, covering the opening lap in 61.50 with Chelimo in second place and Barega and Bekele close by. The Ingebrigtsens, meanwhile, sat near the back.

One lap later, a gap was beginning to form in the middle of the pack while Henrik Ingebrigtsen was starting to drop off the back. As the pace gradually increased with each lap, the Ethiopians continued to share the lead and it was Barega’s turn at the front as they passed 2000m in 5:14.63.

Bekele then led for a couple of laps with Chelimo still clinging on to second place and they went through 3000m in 7:53.02. The slight decrease in pace allowed the pack to bunch up slightly with Filip and Jakob Ingebrigtsen taking closer order.

Tired of sitting in second place, Chelimo hit the front and led for a lap, but Barega, Edris and Bekele were right behind. Jakob and Filip Ingebrigtsen then moved right up the field on to Chelimo’s shoulder as the Olympic silver medallist slowed the pace down.

Having let Chelimo had a chance to play with the field, Barega regained control of the race with Jakob close behind while Isaac Kimeli, Stewart McSweyn, Justyn Knight and Hassan Mead were the next to lose contact with the lead pack.

With three laps to go, Canadian record-holder Mo Ahmed made a bold move to the front of the pack. The Ingebrigtsen duo, Chelimo and the Ethiopian trio were all close by, so much so that they were starting to clip one another’s heels as they prepared to make their final kick.

More jostling and tripping came with 600 metres remaining as Ahmed was still trying to keep Jakob, Chelimo and Barega at bay. Having slipped out of contention, Filip stepped off the track and could only look on in the hope that his younger brother could add a world title to the European golds he won last year.

Jakob made his move with 300 metres to go and Chelimo tried to go with him. Edris, meanwhile, was closing on the lead quartet. Approaching the home straight, Barega and Edris moved past Jakob into the lead, hitting their top gear. Both sprinting for the line, Edris edged ahead of Barega with about 40 metres remaining and crossed the line in 12:58.85, having covered the final 1000m in 2:24.92.

It was just the third time in World Championships history that the 5000m title was won with a sub-13-minute time. Edris also joins Farah and Ismael Kirui as a multiple winner of the world 5000m title.

“I’ve struggled so much over the past few years and have overcome many injuries, so I am grateful to win today,” said Edris. “I injured my ankle one year ago, then I got some abdominal problems and I didn’t do well in my races. But I didn’t feel pain before coming here, so I told myself that I could fight for the victory.

“It was great to see all the people cheering for us,” he added. “With fans like that, you win.”