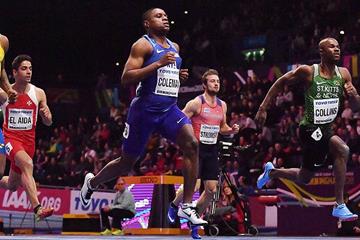 Fifteen years later, the grand old man of the sprint game was back on the 60m strip in the centre of the arena, ready for the ultimate challenge of his long and distinguished international career. At the age of 41, the pride of St Kitts and Nevis has declared his intention to finally hang up his well-worn spikes after exiting the 60m in Britain’s second city.

It just so happened that the 2003 world 100m champion was drawn in the first of seven heats, against Christian Coleman, the 21-year-old who smashed Maurice Greene’s world indoor 60m record with a scorching 6.34 at the US Indoor Championships in Albuquerque on 18 February.

In between them, in lane five, was the youngest competitor in Birmingham. Jacob El Aida. Born in November 2001, the 16-year-old from Malta hadn’t even been born when Collins won his first global medal, the 200m bronze at the 2001 World Championships in Edmonton.

The teenager will long remember the day he raced the new sprint phenomenon and the legend. Sadly, Kemar Hyman will not. The Cayman Islands record-holder fell out of his blocks, drawing the first red card of the competition.

When the race got underway at the second time of asking, Coleman shot out of his blocks, stumbled on his third step but still had sufficient drive to pull clear before shutting down at 40 metres and crossing the line first in 6.71. The world 100m silver medallist was only the 16th quickest qualifier but clearly there is a good deal more in the tank.

“My start was decent, but I tripped,” said Coleman. “I stayed calm and made it through. My focus is to win. I’m really excited and feel well prepared. The crowd here is great so far and I think it will be electric this evening.”

Swede Odain Rose took second place in 6.73 and Collins claimed the third automatic qualifying spot for this evening’s semi-final, clocking 6.77. “I feel young but it is time to say goodbye,” reiterated Collins. “This is it.”

There was a momentous performance in fourth place, Jonah Harris running 7.03 to break the Nauru record of 7.30 set by Jay Jay Capelle at the 2003 championships on the same track. El Aida came next, fifth in 7.09. “I saw the list of heats when I was in the stands and I didn't stop smiling for 30 minutes,” the Maltese teenager said. “In the call room, I was very nervous and I wasn't sure whether to talk to anybody or whether the others did not want to be interrupted. It helped me that Kim Collins was joking around.

"We don't have an indoor track in Malta, so we have to go abroad to run indoors. I hope I am running when I am 41."

Heat two was a textbook demonstration by China’s Su Bingtian. The 28-year-old maintained his unbeaten record this year, storming to victory in 6.59 ahead of the Bahamian Warren Fraser and Jamaica’s Kimmari Roach, respectively second and third in 6.71.

“I felt very relaxed for my first run,” said Su. “In the semifinal I'm aiming for 6.50. I think that will be enough to make the final and then my target is obviously a gold medal.”

The second quickest time came in heat four, Turkey’s Emre Barnes surviving a yellow card for movement on the blocks to win in 6.58 from China’s Zhenye Xie (6.62) and German Michael Pohl (6.73).

British champion Chijindu Ujah was an impressive winner of heat five, in 6.59 ahead of Ivorian Arthur Cisse and Ghana’s Sean Safo-Antwi, both men running 6.66. Eighth-placed Karalo Maibuca set a Tuvalu record of 7.47.

The fastest time came in the final heat, Coleman’s US teammate Ronnie Baker storming to victory in 6.57 ahead of Saudi Arabian Abdullah Abkar Mohammed (6.62) and Mauritian Jean-Yann De Grace (6.78). There was a national record of 6.82 for Swaziland’s Sibusiso Matsenjwa in fifth place.

“This is my first World Indoor Championships,” said Baker. “The mindset is to win a gold medal but being in the top three is great. Just having a medal would be great and hopefully tonight I can secure one of those.”