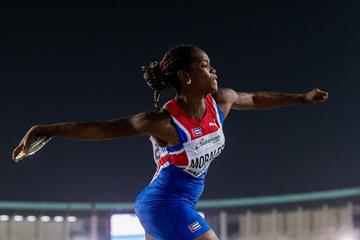 Silinda Morales became the third Cuban girl to win the world U18 discus title, doing so with a last-round throw of 52.89m. She also gave Cuba its third gold in Nairobi after two earlier wins in the boys' horizontal jumps.

Germany's Leia Braunagel took the silver with 51.29m after leading for most of the competition and Liu Quantong took the bronze for China with 50.10m.

Morales entered the final with the best mark of all its participants, and the main challenge to her dominance was expected to come from her compatriot Melany Mattheus and China’s Yin Yuanyuan. But the things did not quite go according to expectations.

It was Leia Braunagel who took the lead with her first-round throw of 51.29m, merely four centimetres down on her personal best. Morales was not far behind in round one with 50.83m.

The German's results seemed well within Morales's capabilities, with her best standing at 53.21m, but the Cuban was unable to come anywhere near it on any of her next three attempts.

Meanwhile, her teammate Mattheus fared much worse and was eliminated from the competition after three no-throws.

It was only in the fifth round that Morales was able to find something close to her best form. A throw of 51.96m sufficed to take over the lead. The German still had two throws remaining at that point, but neither she nor anyone else could find a response.

It was Morales herself who saved the best for last. On her sixth throw she further consolidated her lead, getting close to her personal best with 52.89m. She thus ended the competition as a clear winner with the two longest throws of the final.

Of the two Chinese, it was the less favoured Liu who ended up on the podium. Liu had the most consistent series of all finalists; in fact, any of her six attempts would have been good enough for a medal. Her best of 50.10m came in the fifth round. It was not enough to threaten the top two, but she finished nearly three metres ahead of the fourth-placed Tharina van der Walt of South Africa, who reached 47.27m. The other Chinese, national U18 champion Yin Yuanyuan, could do no better than 46.78m to take fifth.