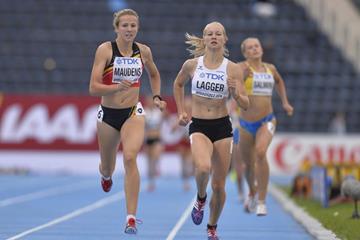 The world U18 heptathlon silver medallist is now the world U20 champion.

Competing one week after taking European U18 silver, 16-year-old Sarah Lagger showed no signs of fatigue when contesting her second heptathlon within eight days.

Not only that, but she also won Austria’s first medal of any colour in the history of the IAAF World U20 Championships.

Lagger hadn’t led the heptathlon at any point throughout the two-day competition, nor did she produce the best mark in any of the individual disciplines. Meanwhile, Cuba’s Adriana Rodriguez – who, like Lagger is also born in 1999 – had led since the first event.

Nevertheless, Lagger loomed large as a threat for the duration of the contest.

Rodriguez started the second day with a 181-point lead over Lagger. She added three more points to that margin after leaping 5.96m in the long jump to Lagger’s 5.95m.

Belgium’s Hanne Maudens entered the frame as a medal contender after sailing out to 6.34m, the best mark of the day, taking the European junior silver medallist from eighth to third in the overall standings.

But Lagger made significant inroads into Rodriguez’s lead during the javelin, throwing 43.65m to the Cuban’s 37.36m, PBs for both. It meant that Rodriguez carried a 64-point lead going into the 800m – the equivalent of 4.82 seconds – but the difference in their PBs was more than 11 seconds in Lagger’s favour.

On the first lap of the 800m, Lagger let Maudens take the lead but Rodriguez was positioned ominously close as they went through the first 400m in 1:08.54. Lagger then moved to the front, knowing that she had to open up a gap on Rodriguez.

Maudens followed Lagger, but Rodriguez gradually began to fall behind. Lagger and Maudens were locked in their own battle for the line with the Belgian getting it on the line, clocking 2:15.70. Lagger was close behind in 2:15.99, while Rodriguez was still near the top of the home straight, eventually crossing the line in 2:23.27, a lifetime best but not enough to hold on to gold.

It meant that Lagger had done more than enough to take victory, tallying a national U20 record of 5960. Rodriguez scored a PB of 5925 for silver, while Maudens also set a lifetime best, taking bronze with 5881.

In fact, the top six finishers all set PBs; Bianca Salming was fourth with 5840, fellow Swede Lovisa Osterval was fifth with 5723, and Canada’s Nina Schultz – the granddaughter of former high jump world record-holder Zheng Fengrong – was sixth with 5639.

“I’m totally overcome with emotion,” said Lagger. “After the shot put I started thinking the win was possible. I decided to come here only last week after competing at the European Youth Championships in Tbilisi, when I saw I had the highest score on the entry list.

Still in the U18 age group, both Lagger and Rodriguez will be young enough to compete at the IAAF World U20 Championships Tampere 2018.