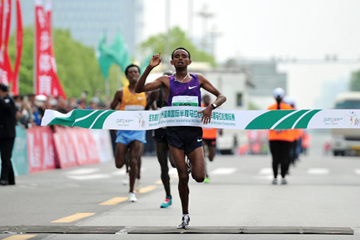 An outstanding home stretch sprint from Mosinet Geremew landed the Ethiopian with his third consecutive title at the Yangzhou Jianzhen International Half Marathon, an IAAF Gold Label Road Race staged in the historic Chinese city on Sunday (23).

As the first ever sub-60-minute half marathon runner on Chinese soil, Geremew used the same strategy as he had done in Yangzhou for three years: patiently staying in the lead group, keeping pace closely with whoever pulls away and sprinting out for the win in the final few hundred meters.

That simple strategy led Geremew to a course record of 59:52 in 2015 when he won by three seconds, while last year he held off four runners to retain the title with a margin of just one second.

But this time Geremew’s winning margin was even narrower.

Running under sunny conditions, a lead group of 22 runners paced the race to the three-kilometre mark in 8:48. After passing 5km, the lead group was trimmed to 17.

After another kilometre, 26-year-old Leonard Kipkoech Langat, who has a PB of 59:52 set when finishing third at the 2011 Ras Al Khaimah Half Marathon, and Ethiopia’s 2011 world cross-country champion Imane Merga tried to pull away. But their efforts came to nothing as they were soon caught by the chasers.

Kenya’s Wilson Kiprop Tuitoek started to run at the front after eight kilometres, pacing a lead pack of 16 to 10km in 28:41. And after another two kilometres, the pacing duties were taking up by Kenya’s Shadrack Kimining Korir, who was aiming to improve on the PB of 1:00:07 he set at the RAK Half Marathon in February.

Korir remained in the front pack for more than four kilometres before Cheroben launched his charge at 17km. This time only Langat, two-time defending champion Geremew and Kenya’s Nobert Kigen, a 59:42 half marathoner who finished fourth at the recent Seoul Marathon in 2:06:07, managed to keep up with him.

The quartet remained shoulder-to-shoulder until Geremew’s powerful dash before the line awarded him the narrow victory, emerging victorious from the four-man battle to win by just 15 hundredths of a second. His winning mark of 1:00:56 is 1:45 shy of his personal best set in New Delhi in 2014.

Langat was given the same time in second place, while Asian record-holder Cheroben was third in 1:00:57.

Ethiopia’s Sutume Asefa, who has a PB of 1:08:23 and finished fourth at the 2016 Dubai Marathon in 2:24:00, clocked 1:10:30 to take the women’s title, putting an end to the three consecutive victories achieved by Kenyan women in Yangzhou.

In a similarly close race, a group of 10 women paced the first half and the leading group kept shrinking before only Asefa and her compatriot Ababel Yeshaneh, the Olympic 10,000m finalist, were left in the front after 17km.

The 25-year-old Yeshaneh, whose PB of 1:07:52 was set last year in New Delhi, followed Asefa closely until the final kilometre but could not withstand Asefa’s final charge and had to settle with second place in 1:10:38.