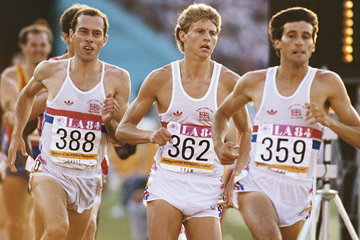 Getty Images sales manager Neil Loft manages the IAAF account and has a longstanding connection with athletics photography stretching more than 25 years. Loft explains what this iconic image of three British middle-distance icons means to him.

I couldn’t pinpoint exactly when I first saw this image of Steve Ovett, Steve Cram and Seb Coe competing in the 1984 Olympic 1500m final (Coe won gold and Cram silver) but I must have seen it in magazine because I cut it out and stuck it on my wall. At the time, I was an enthusiastic 11-year-old middle-distance runner in the UK and all three athletes were big heroes of mine.

As a fan, the attraction of the picture is its scarcity because Coe, Cram and Ovett only ever raced a handful of times in their career. For me, the picture does everything. It is three guys competing in an Olympic final – in second, third and fourth at the time – all in the same frame.

Ovett looks quite relaxed, even though in 30 or 40 metres he was to drop out of the race with breathing issues. Cram looks quite pensive and Seb is flying. There is something special about sporting threes, a certain symmetry with three people in the picture, and it perfectly encapsulates the dominance of British middle-distance running at that point in time.

In fact, I think this moment represents the high watermark in British middle-distance running in the 1980s. Great Britain was the top nation in the world over 1500m from a period from 1980 through to probably the 1987 World Championships. At every major championships it was just expected that a Brit would win the men’s 1500m.

The image has its technical faults and from a photographic point of view you’d probably prefer more of the focus to be on the person leading the pack. I’ve also been involved in many other images where I’ve had more of an emotional attachment through their capture, delivery and success. However, this image to me represents the sheer joy of being an 11-year-old boy who one day wants grow up to be a Steve Cram, Seb Coe or Steve Ovett.