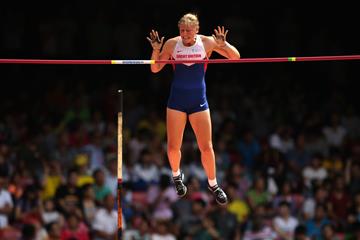 British record-holder Holly Bradshaw is among the world’s top pole vaulters. The 2012 world indoor bronze medallist looks back on overcoming four surgeries in the past four years as the greatest hurdle in her career.

A career of two halves

"I look back on my career in two separate blocks.

"The first would be in the eight or nine years since I first started the sport, leading all the way through to the London Olympics. The second being my post-London career. During that first block, I could not put a foot wrong. I enjoyed an amazing time with no downfalls. I loved the event, the sport, everything went so well.

"However, since London I have faced some really hard challenges. During each of the past four years, I’ve had a surgery. I’ve faced some horrible injuries. It has been relentless.

"After the London Olympics, I developed a back problem which spilled over into 2013 and I had back surgery the next year. In 2015 I had a knee surgery and I have had an achilles surgery for each of the past two years.

"I’ve endured some dark times. With the back injury, I had six months out when I couldn’t do anything. I couldn’t even jog or lift weights, which was really difficult as I have always been active for as long as I can remember. Each injury has proved a mental challenge.

"Yet at no stage have I ever doubted myself. I have been lucky to have a great support network. I have an amazing husband and family that back me 100 per cent. I have a very supportive coach (Scott Simpson) and training partner (Sally Peake). I have support at British Athletics and through my psychologist, Sarah Cecil. I am fortunate to have such a tight-knit team who have been with me every step of the way.

"When I was younger, after I jumped the British record of 4.87m, I thought I was going to jump those heights every week. But it doesn’t work like that, so after I jumped 4.80m in Manchester in May I felt very grateful.

"I feel now I have the right the balance in terms of how to train without injury. I can take rest days when I need to. I’m not slogging myself during training. It is all about being smart. I’ve learned so many valuable lessons from each and every injury. It has made me a better athlete."