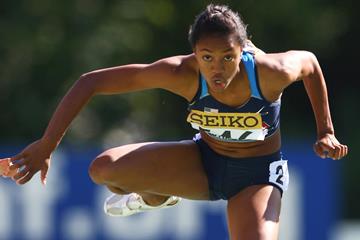 It’s not just the gold medallists who gain valuable experience from competing at the IAAF World U20 Championships. Many other competitors go on to become stars of the sport in their senior years.

Nine years before winning the world 400m hurdles title, Kori Carter finished seventh in her heat at the IAAF World U20 Championships Bydgoszcz 2008.

For much of the 2008 season, Kori Carter never even considered she’d compete at the 2008 IAAF World Junior Championships.

Back then a high school student in Claremont, California, she had enjoyed some success in the 100m hurdles and 300m hurdles, but it was only after her father persuaded her to run at the US (World U20) Trials did the unexpected happen. Carter ran 60.69 to place second and book her ticket on the US team for Bydgoszcz.

“My dad only put me in (the competition) to see what I could do against the other girls,” explains Carter, who also finished seventh in the 100m hurdles at that competition. “To somehow finish second and make it on to the team… it all happened like a whirlwind.

“Making my first national team was a huge moment,” she added. “It convinced me that I could be somebody in track and field.”

The performance was particularly noteworthy on two fronts. Firstly, having just turned 16 a little under three weeks before the trials, she was competing against athletes up to three years older. Secondly, she had only competed in the 400m hurdles a handful of times, having typically raced the 300m hurdles distance. It was a big adjustment to make.

“The 300m hurdles is a completely different event to the 400m hurdles,” she explains. “I’d also done the 200m hurdles when I was younger and I could make the extra changes to the 300m (hurdles) quite easily. But the way you have to pace yourself for a 400m (hurdles) is very different.”

On what was her first European trip, there is little doubt she had blast in Poland. As one of the younger athletes on the team, she recalls being ‘babied’ by her teammates. She also remembers, for the first time, fully appreciating the status track and field holds within Europe.

“It was cool because some athletes on the team that I’d only previously seen on TV took me under their wing,” she explains. “I developed some relationships which I still have to this day. It was a fun experience, but also a learning experience.”

Competing with low expectations given it was so deep into the summer season, she performed modestly in her 400m hurdles heat, finishing seventh in 61.20 – the best part of two-and-a-half seconds behind heat winner Sarah Wells of Canada.

Rather than let the experience crush her, Carter’s first taste of major international competition acted as a spur and the following year she returned to the international scene to take 100m hurdles silver at the 2009 IAAF World U18 Championships in Italy.

“One of the biggest things I took away from my World U20 Championships experience was simply observing teammates, watching how they conducted themselves and how they approached track and field,” she explains. “I was like a sponge absorbing all that knowledge and because I was so young, I felt it helped my maturity.

“I remember watching teammate Jessica Beard (the 400m silver medallist) – she seemed so confident. Before the race she said ‘my nails are going to look great’. She was confident going into the race and I loved that. Christian Taylor (the two-time Olympic and three-time world champion) was also on the team and he was so mature, cool and graceful.

“Bydgoszcz was great in that I got to see what track was like (at a global level) and I also got to see what my own future looked like,” says Carter, 26, who missed out on making the US Olympic team in 2016 but bounced back last year to strike gold in the 400m hurdles from the outside lane at the IAAF World Championships London 2017.

For any athletes set to compete at the IAAF World U20 Championships Tampere 2018, the US hurdler has some astute advice.

“Just enjoy the moment,” she says. “Your life flashes by very quickly. To be given the opportunity to travel the world with your country is special. Recognise the event for what it is: bringing together the brightest and best young talent in track and field.”