Over the first nine days of 2019, we will be taking a look at nine things we're really looking forward to as we enter another IAAF World Athletics Championships year.

On Tuesday, we focused on established stars who will be returning from injury. Yesterday we discussed some of the rising stars primed to make an impact this year. Today, we continue with a look at...

Mike Powell broke the world record in the men's long jump on 30 August 1991, sailing 8.95m at the World Championships in Tokyo. It took one of the finest duels in the event's history to set that record which is now, more than 27 years later, one of the oldest in the books.

Cuba's Juan Miguel Echevarria in action in the long jump

It remained largely unchallenged until last season, when Juan Miguel Echevarria burst onto the scene. A few months after his upset victory at the World Indoor Championships, the Cuban, still 19 at the time, flew to a barely wind-assisted 8.83m (+2.1) at the Stockholm leg of the IAAF Diamond League. Each of his subsequent competitions have been closely watched since.

Like Powell, who was duking it out with Carl Lewis for much of his career, Echevarria might be just the push that world champion Luvo Manyonga has needed to move him closer to the world record and the nine metre-barrier. The 27-year-old South African has an 8.65m lifetime best and last season remained consistent in 8.50m-territory.

Nearly as old is the men's world record in the 400m hurdles, Kevin Young's otherworldly 46.78 performance set at the Olympic Games in Barcelona on 6 August 1992. For nearly 26 years, that occasion remained the only time anyone had broken the event's 47-second barrier. That finally changed last season with Abderrahman Samba's dominant rise which culminated with his 46.98 victory at the Paris stop of the IAAF Diamond League.

Abderrahman Samba en route to his historic 46.98 run in the 400m hurdles at the IAAF Diamond League meeting in Paris

But the Qatari had company in 2018. Rai Benjamin was nearly as fast, winning the NCAA title in 47.02, a performance that elevated him into a tie with all-time legend Edwin Moses as the third fastest 400m hurdler in history. And good news for the event: Samba is just 23, and Benjamin 21.

The record on the women's side, Yuliya Pechonkina's 52.34 set in 2003, also looks to be primed for revision.

Sydney McLaughlin in the 400m hurdles at the NCAA Championships

Dalilah Muhammad of the US, the 2016 Olympic gold medallist and this year's IAAF Diamond League champion, is history's sixth fastest at 52.64. Meanwhile, Shamier Little, 2018’s most consistent performer, set her 52.75 lifetime best behind Muhammad in that same national championships race in 2017, moving up to No. 9 all-time. Then there's Sydney McLaughlin, the 2018 Rising Star Award winner, who equalled Little's time last season - at age 18. While McLaughlin is seen as the future of the event, remember: Little is just 23 and Muhammad 28. Both have ample time to go much faster.

Yelena Isinbayeva, the queen of the women's pole vault, has had a stranglehold on the world record since 2004, with the current standard of 5.06m celebrating its ninth birthday last August. Only two other women - Jenn Suhr at 5.03m indoors and Sandi Morris with 5.00m outdoors - have topped the magical five-metre mark. But both have made solid attempts at higher heights, suggesting Isinbayeva's record is no longer out of reach.

Meanwhile, New Zealand's Eliza McCartney, the Olympic bronze medallist, made a big leap forward last season when she topped 4.94m to move up to No. 3 all-time outdoors. Boding well, she only turned 22 last month.

Unfortunately, the Qatari left that competition on a stretcher after sustaining an ankle injury. Will he manage to return his body to that level again? That's one of the key questions lingering over the event in 2019.

Even older than all of those is Randy Barnes' 23.12m in the shot put, set on 20 May 1990 at the Jack in the Box Invitational in Westwood, California. Only two men have thrown beyond 23 metres, but two more are closing in. World champion Tomas Walsh of New Zealand, who reached a world-leading 22.67m last season, is improving year-to-year. Ryan Crouser of the US, the reigning Olympic champion, threw 22.65m in 2017. Both are 26 and arguably, not yet in their prime. 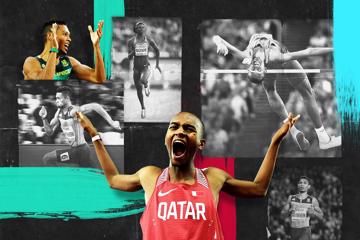 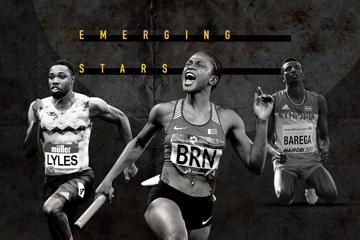