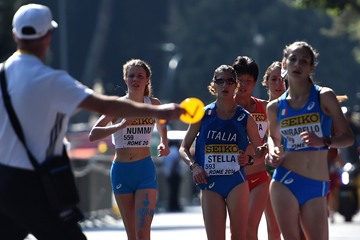 Way of the walk: the pit lane

How does the pit lane work?

When an athlete is given three red cards, rather than this leading to disqualification, they are taken to a pit lane where they serve a time penalty dependent on the distance of the race (one minute for 10km races, two minutes for 20km races and five minutes for 50km races). The athlete then re-joins the race. If they then receive a fourth red card, this will then lead to disqualification.

What are your thoughts on the pit lane innovation?

JS: Some traditionalists don’t like it but it is very similar to the old rules, except it gives an extra opportunity for race walkers to continue and finish the race. It may sometimes mean an athlete finishes further down the field than they otherwise would have done, but that is much better than having a DQ next to their name.

Jefferson Perez: We want more people race walking and maybe this is a good option to get more people involved and more athletes finishing races. The pit lane offers this opportunity.

Robert Korzeniowski: I am totally in favour. I believe this should operate not only with elite athletes but at races involving younger kids too.

I would go a stage further and introduce a biathlon-style pit lane whereby athletes are given a time penalty for each red card. This would be like a breath of fresh air for the sport and make it more spectacular. The pit lane is a little step forward.

How does the pit lane affect the dynamic of the race?

RK: It gives the athletes another opportunity to finish the race. I think his will lead to faster racing and it keeps the intrigue and interest in the race for longer. We’ve seen how innovations in football and volleyball have brought a new level of interest. This will also help race walking.

JS: The pit lane can, potentially, change the course of the race and make it more exciting.  If more athletes are kept involved in the race, then that is no bad thing. I don’t think any race walker goes out to deliberately break the rules.