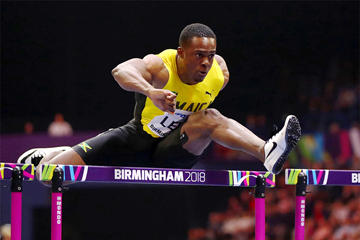 The 2017 season gave Commonwealth 110m hurdles champion Ronald Levy both the highest and lowest moments of his career so far.

For many years, I struggled to produce my best form because of injury.

I started out as a 400m hurdler and in 2013 I broke my foot while going over a hurdle. I switched to the 110m hurdles in 2015 but still the injuries came and I struggled to complete a full season.

In 2016 I was performing really well. I ran a personal best of 13.50 but then I hit a hurdle at the Jamaican Invitational and damaged an ankle ligament. It was very painful and for a while I couldn’t put any pressure on my foot.

My low moment came at the World Championships when I suffered a hamstring injury in the heats and failed to finish.

As soon as I pushed out of the blocks, I felt it. I thought I could get some treatment after the race but when I pushed off the trail leg, it felt worse. I had suffered a grade three tear on the hamstring I and I was out for three weeks.

It took a long time to recover from the disappointment and, to be honest, I’m still recovering. I was running really quickly at the time, so for that to happen when it did, I was devastated.

I felt I was ready to win a medal given the shape I was in. I felt there was no way I couldn’t win a medal. I came back later that season and competed, but the injury continued to bother me. I had to realise that these things happen in track and field; I also needed to learn from them.

Now I know what I need to put in place to stay healthy. What I learned in 2017 is now guiding me through the 2018 season.