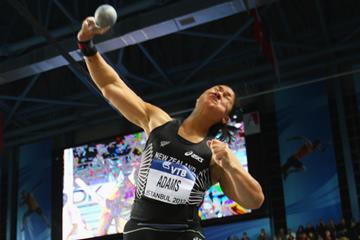 We’re reaching the final stretch in our countdown to the IAAF World Indoor Championships Birmingham 2018. Today, we visit with New Zealand shot put superstar Valerie Adams, who clinched four successive world indoor titles from 2008-2014 during a glorious period of dominance in her event. Adams reflects on her memories of competing across six IAAF World Indoor Championships and what the biennial event means to her.

Can you recall your first indoor throwing experience?

Yes, that came at the 2004 World Indoors in Budapest when I was a very green 19-year-old. We don’t have any indoor arenas in New Zealand so my first indoor experience was a little bizarre. But I loved the fact the crowd were so close to the action and it was also my first time competing on wooden circles, which I quite like because I find them faster than the concrete outdoor circles.

You threw 18.22m in qualification in Budapest (to place 10th). How satisfied were you with your performance?

It was an Olympic year but I didn’t know what to expect going into the championships. I recall not throwing that well on the day and being disappointed but it was my first real opportunity I’d experienced to compete against all the top European athletes, so it was a bit of an eye opener for me.

Your next world indoor appearance came in 2008 in Valencia. How important was it going into that event that you had enjoyed the experience of competing in Budapest?

Budapest gave me a sense of what the World Championships is all about. By then I had a few more years’ experience under my belt, I was less green and more able to deal with the occasion mentally.

I did go in as favourite, although (Nadzeya) Ostapchuk had thrown some big throws before Valencia. It was good for me to dominate from the start because it was all part of the mind games in the countdown to the Olympic Games (which took place in Beijing later that year) and you always want the upper hand.

What did it mean to you to win your first world indoor title?

It was awesome to win, especially in an Olympic year. It was great to be able to add the world indoor title because I had already won every other world title with the World outdoors, World U20 and World U18s. It was a great experience and I distinctly remember the hand over to the next World Indoor Championships in Doha (in 2010).

Adams was retrospectively awarded her second world indoor title in Doha with an Oceania record of 20.49m following the suspension of Ostapchuk and two years later defeated her Belarus rival in a ding-dong competition to claim a hat-trick of world indoor titles in Istanbul. What do you recall of the fight for gold?

Leading into Istanbul (compared to Doha) I had changed my whole coaching structure, I was also now divorced, many things were completely different. It was a really competitive battle (between Adams 20.54m and Ostapchuk 20.42m) - she really pushed me but I was glad I was able to hold it together on the day. My coach, Jean-Pierre (Egger) was not one hundred per cent happy with my performance and both he and I knew I could do better but it was nice to win the countdown to the Olympic Games and make a statement.

In the 2014 World Indoors in Sopot you were totally dominant producing the five longest throws of the competition (and a best of 20.67m) with your five valid throws. Was this success one you could really enjoy?

Yes, it made it a little more fun. I was in pretty good nick at the start of the season and I was in a good place. You can never underestimate the opposition but I couldn’t complain about the five longest throws in the competition!

Your journey to the bronze medal (with a best of 19.25) at the 2016 World Indoors in Portland was quite different to your previous World Indoor experiences. Can you explain the background to your road to the podium?

I had major surgery on my elbow in 2014 but I think I underestimated the damage done to the tendons. I tried to come back in 2015 but I ended up missing the entire year and it took me 18 months to get back to a decent level. Then at the end of 2015 I had surgery on my knee. This was a really tough period, not only physically but also mentally and emotionally and it was intense because of the nerve pain in my elbow. It was tough going in Portland. My body was not doing what my mind was asking it, but at the end of the day I competed as well as I could. I was disappointed but I did manage to win a medal.

You have always been a loyal supporter of the World Indoor Championships. What was your motivation to consistently commit to the event?

It was a great opportunity to compete against the best in the world early in the season and act as a gauge as to where I was at against them. It is always important to me to be competitive throughout the whole year. The competition was always close to or on par with the quality of an Olympic final and before the Diamond League (which was created in 2010) the World Indoors were perhaps one of only a couple of competitions each year in which I had the opportunity to compete and take on the world’s best.

How proud are you of what you have achieved at World Indoor Championships?

It is not an easy feat (to win four successive gold medals) and I am immensely proud little old New Zealand can get up and amongst it at a World Indoor Championships level because we have no indoor track down here in Oceania. I wish we had our own Oceania Champs because I feel more athletes from the region would then be able to qualify for World Indoors.

Why is the World Indoor Championships such a special event?

Every championships has its own feel and for us (in the Southern Hemisphere) the World Indoors lands right in the middle of our summer season. I really enjoy the event. There are heaps of action to enjoy across the three-day programme – it is like a mini World Championships.

Do you have a personal highlight from your time competing at the World Indoors?

I loved Istanbul. The crowd was great but also enjoyed a fantastic competition, which is what sport is all about.