After a string of 200m victories and some swift – albeit wind-assisted – times over 100m in the past two months, 17-year-old Erriyon Knighton finally entered the record books with his 20.11 200m win at the Duval County Challenge, a World Athletics Continental Tour Bronze meeting, in Jacksonville on Monday (31).

Knighton, who hails from Tampa in Florida, turned professional at the start of this year and has been mixing it with the world’s best during the outdoor season. He clocked a wind-assisted 9.99 over 100m in Clermont at the start of May and followed it with a 200m PB of 20.30 at the World Athletics Continental Tour Gold meeting at Mt SAC. More recently, he won the future stars 100m race at the Continental Tour Gold meeting in Boston, clocking 10.16.

In Jacksonville, however, Knighton made another step up in class, taking on some of the world’s biggest sprint stars.

Drawn in lane three, Knighton got off to a solid start and trailed European champion Zharnel Hughes and 2016 world indoor 60m champion Trayvon Bromell as they entered the straight.

Bromell briefly edged in front while Hughes faded slightly, then Knighton held his form well to take the lead, crossing the line in 20.11 (1.6m/s) to take 0.02 from the world U18 best set by Usain Bolt back in 2003.

Bromell finished second in 20.20, his fastest time for five years, while Hughes was third in 20.30.

Shamier Little improved her own world-leading 400m hurdles mark by more than half a second, dominating the race to win in 53.12 – the second-fastest time of her career.

Jamaica’s Ronda Whyte was a distant second in 54.33. Dalilah Muhammad, competing in a separate heat, clocked 55.01 in what was her first hurdles race since breaking the world record to win the world title in 2019.

World leader Jasmine Camacho Quinn had won her heat in 12.50 but was disqualified from the final for a false start.

With his second-round winning leap, the world bronze medallist from Burkina Faso added one centimetre to his outdoor national record and equalled the meeting record set by his coach, Teddy Tamgho.

He followed it with 17.32m, then his three remaining jumps were all fouls. 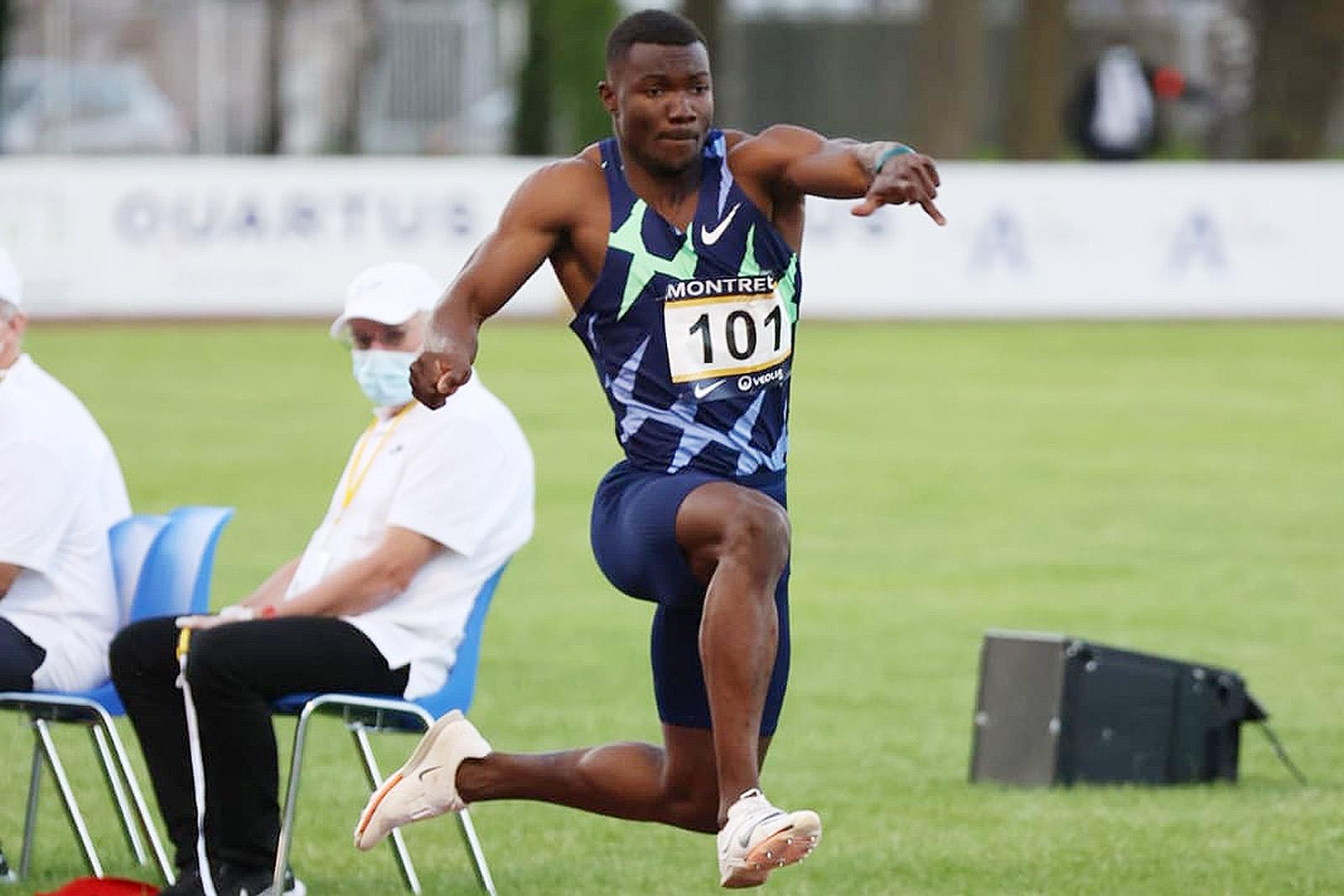 World U20 indoor record-holder Melvin Raffin, who before this year hadn’t managed to compete outdoors due to injury since 2017, sailed out to an outdoor PB of 17.19m to finish second, recording his first outdoor 17-metre leap.

Four other meeting records were broken in Montreuil. Of those four performances, Beatrice Chebet’s 5000m victory was perhaps the most impressive.

The world U20 5000m and cross-country champion, who was a surprise winner over 3000m at the Wanda Diamond League meeting in Doha last week, once again used her sprint finish to great effect. Bahrain’s Kalkidan Gezahegn had led for most of the way, running a few seconds ahead of the chase pack.

At the bell, though, Chebet started her long run for home. Having made up a huge amount of ground, Chebet moved on to Gezahegn’s shoulder on the final bend and then strode clear to win in 14:52.06. Gezahegn finished second in 14:52.92, while Sheila Chepkirui, Francine Niyonsaba and Mercy Cherono all finished inside 15 minutes.

Following a string of domestic victories in Nairobi and a recent win in Rehlingen, Kenya’s Abel Kipsang continued his winning streak in the 1500m. He held off compatriot Charles Simotwo to win in a meeting record of 3:33.99.

Darya Barysevich came through in the very late stages of the women’s 1500m to overtake Romania’s Claudia Bobocea and win in a meeting record of 4:06.91.

Olympic heptathlon champion Nafissatou Thiam, competing in her first outdoor high jump competition of the year, won with a meeting record of 1.89m.

European indoor champion Patryk Dobek continued his progress in the 800m, taking another chunk off his PB to win in 1:44.76, 0.04 ahead of Kenya’s Collins Kipruto.

Two-time European silver medallist Renelle Lamote won the women’s race in 1:58.65, the second-fastest time of her career. Britain’s Ellie Baker was second in a PB of 1:59.54, 0.33 ahead of Sweden’s Lovisa Lindh.

Japanese sprint hurdler Asuka Terada made another improvement on her own national 100m hurdles record, clocking 12.87 at the Michitaka Kinami Memorial – a World Athletics Continental Tour Bronze meeting – in Osaka on Tuesday (1).

Nineteen-year-old Rachid Muratake clocked 13.35 to win the men's sprint hurdles, a Japanese U20 record over the senior height barriers. Only three other U20 athletes have gone quicker for the discipline.

Takuto Konami came within nine centimetres of his recent PB to win the men's javelin with 82.43m, beating Genki Dean (81.06m). Momone Ueda won the women's event with a PB of 60.38m, her first competition beyond 60 metres.

BACK
Pages related to this articleAthletes
Hugues Fabrice ZANGO