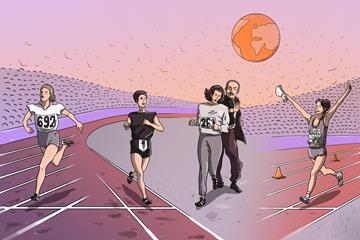 The Athletic Life: the importance of remembering our pioneers

As International Women's Day approaches, a humble tribute to the women who faced barriers which are so easy to forget now.

I've run quite a few serious marathons, countless half marathons, 10ks and 5kms, and even once attempted the long jump (more of a short jump at 2.36m), shot put (a whopping 5.36m) and discus (14.90m) in a crazy 30 minutes while competing in a vets division when our team was short, and any effort counted. Indeed, some of my efforts have made me feel like a fraud, lined up alongside vastly faster and fitter runners. Yet I have never questioned whether I have the right to compete. That is one of the great strengths of modern track and field.

And yet it is only so shockingly, jarringly recent, that women could - were actually allowed to - run in endurance races. The World Major marathons weren't open to women - at any level - before the 1970s. Women were not able to run beyond 200m at the Olympics until 1960, and further than 1500m until 1984. Not till 1988 was there an Olympic female 10,000m champion.

I know these facts - and yet it’s also almost surreal to me that these are Olympic Games I actually remember watching as a child. The history of women's athletics really isn't past tense: it's not written in dusty tomes on untouched library shelves. It was made by women who are still very much alive and kicking - in fact, sometimes even still setting running records.

With International Women's Day around the corner, it is high time that some of the great stories of female athletes were better known. It was only pretty recently, for instance, that I became aware of the Fanny Blankers-Koen. Born in 1918 in the Netherlands, she was so good at so many sports - tennis, swimming, gymnastics, ice skating, fencing and running - that she couldn't choose her favourite, and was persuaded to stick to running on the grounds that there were fewer Dutch women likely to qualify for the Olympics in that event.

Her talents were probably best suited to the 800m, but that was a non starter: introduced for women in the 1928 Olympics, false media reports (early fake news!) claimed that the female participants all collapsed in near-terminal exhaustion, and so it disappeared again at the Games for 32 years.

And so young Fanny was selected for the 1936 Olympics for the high jump and the 4x 100m relay. She took fifth place in the former, and fifth in the team final - and grabbed Jesse Owen's autograph into the bargain (it remained, apparently, her most treasured possession). Then followed marriage, children - and a World War. Any one of those would have been the end of most women's ambitions - female athletes who were married were rare enough, but those who were mothers too? Inconceivable. Yet Fanny kept training, set world record after world record, and in 1948 qualified for the first post-war Olympics.

By this time she had reached the ripe old age of 30 and the British athletics team manager was hardly alone in his considered opinion that she was "too old to make the grade". Rarely has anyone been proved so wrong quite so comprehensively: over the course of seven days Blankers-Koen won gold in the 100m, the 80m hurdles, the 200m and 4x100m. Before the Games, many felt she should be home looking after her kids. On her return, she was greeted as a national hero: thousands lined the streets. Her neighbours presented her with a new bicycle.

If that seems like ancient history - well, Koen only died in 2004. And then there are the heroines from my own country - women like Mary Peters, or Diane Leather. Peters - who, aged 80, still works to support young athletes - herself trained on a pothole-riddled track, taking two buses every day through Belfast’s Troubles, carrying her sister’s starting blocks to practice. She too was “past it” at the age of 33 in the Munich Olympics - but came home with the pentathlon gold medal, laying down a path which female multi-eventers in the UK have followed successfully. Leather, meanwhile, was the first woman to dip under five minutes for the mile - in the same year as, and overshadowed by, Roger Bannister’s more famous sub-four.

Each of these women faced barriers which are so easy to forget now. It wasn't just about which races they were or weren’t allowed to enter, but the hostility and whispers of disapproval that most of us are lucky enough not to encounter: the constant voices of criticism, disapproval, the loneliness of being the only woman at the track, or in the team.

Recently I read about marathoner Joan Benoit’s early days of training as a high school athlete in the USA. She grew up in a pretty affluent, liberal part of the United States, yet it was considered so odd and unusual that a girl would go for a run that she trained almost in secret, in a park, rather than risk ‘standing out’ on the road. Only when she met a female rower who was running in the open did she brave public scrutiny.

It made me realise how lucky we are now, as women, to have so many role models. Whatever your niche, in almost all sports, there is now someone we can look up to. But for the role models themselves? On the paths they chose, not that long ago, they had no guidance, no path to follow. In many ways it makes their achievements - alongside others like Bobbi Gibb or Katherine Switzer - even more extraordinary. Kids should learn these stories at school, and the names of these pioneers should be as well-known to us as their male counterparts so frequently are.