Holloway hopes to have fun in Madrid

Grant Holloway was disarmingly relaxed at the traditional pre-event press conference ahead of the Villa de Madrid meeting – the final World Athletics Indoor Tour Gold meeting of 2021 – on Tuesday (23).

However, the world 110m hurdles champion gave away his inner ambition and steely competitive core with one telling comment.

“Two milliseconds (hundredths) to get to 7.30; it’s definitely possible. I’m in great shape,” said Holloway, referring to the difference between his time of 7.32 – the second fastest ever in the indoor discipline of the 60m hurdles – in the French town of Lievin two weeks ago and Colin Jackson's world record set nearly 27 years ago in March 1994, more than three years before the 23-year-old Holloway was born.

“My coach (his namesake but unrelated Mike Holloway) and I are very excited. I am going to come out here and have some fun,” said Holloway. “It’s my last race of the indoor season so If the record falls, it falls. If it doesn’t fall, then I want to make sure my race is at a high level.

“I’ve never raced in Madrid before and never raced on this track (he was to have a training session later in the day and test out the track for the first time) but I know it has a reputation of being fast. Multiple world records have been set in Madrid but the main thing for me is not to think (specifically) about the record but focus on getting the win,” he added.

Most of those world indoor records were set at Madrid’s Palacio de Deportes, the former venue for Spain’s premier indoor meeting, which is in the centre of the city. The current venue is in the south west suburbs but nevertheless saw Venezuela’s Yulimar Rojas bound out to a world indoor triple jump record of 15.43m 12 months ago and there has been a plethora of other sparking performances since the Centro Deportivo Municipal Gallur started staging international indoor meetings in 2016.

Should the record fall, it would be no surprise personally to Holloway who has a clear idea of where he stands in the contemporary hierarchy of hurdlers.

“My races on the World Indoor Tour have definitely shown that I’m in a standard of my own – I know that I’ve run seven of the top times (all 7.43 or quicker) – but I also hold myself to a higher standard than everyone else.

“My goal is to continue to run 7.3s. I know that sounds very absurd but I’m in great shape so why not? At least, I want to continue having fun on and off the track because this is my dream job. This is something I always wanted to do.”

The inevitable question was posed about what he thought he needed to do to bridge the gap between himself and Jackson indoors.

“If I do those small things then I have the possibility (of breaking Jackson’s record in Madrid on Wednesday evening) but the main goal is not even to think about that, just go out there set my blocks right and just run.”

After a spectacular indoor season which, despite all the coronavirus pandemic restrictions on travelling and spectators, has seen world records in two men’s field events and women’s 1500m, as well as a plethora of stunning performances across the board, perhaps the time is right for a world indoor record in a men’s track event as a climax to this year’s World Athletics Indoor Tour.

It should be noted that Holloway has not actually clinched the World Indoor Tour 60m hurdles title yet despite his super-quick wins in Lievin and Torun. He actually trails William Belocian by four points in the 60m hurdles standings, but finishing third or higher in the Spanish capital will see him overtake the Frenchman, who is not competing in Madrid, and secure Holloway a $10,000 first prize cheque and a guaranteed entry to the next World Athletics Indoor Championships.

Guerrero and Vicente look to tune up for Torun

Spanish duo Esther Guerrero and Maria Vicente were victorious at last weekend’s Spanish Indoor Championships, and they’ll be back in action on Wednesday looking for a confidence-boosting performance before heading out to Torun for the European Indoor Championships.

“I have fond memories of Madrid because it’s where I’ve set many of my PBs,” says Guerrero, who won the Spanish 1500m title last weekend but will be stepping down to the 800m on Wednesday. “I think the 800m is going to be very fast; I’d like to improve my indoor PB (2:01.46) and get close to two minutes.”

Vicente improved her own Spanish indoor pentathlon record last weekend with a score of 4501. The 19-year-old will contest the 60m hurdles on Wednesday – an event in which she has clocked 8.25 this year.

“I think I have room to improve in all five pentathlon disciplines,” said the 2017 world U18 heptathlon champion. “I still haven’t reached my potential in the high jump and 800m, but my training is going very well. At the European Indoors in Torun I’ll be aiming to do my best in all five events and hopefully break my Spanish record again.”

BACK
Pages related to this articleAthletes
Esther GUERRERO 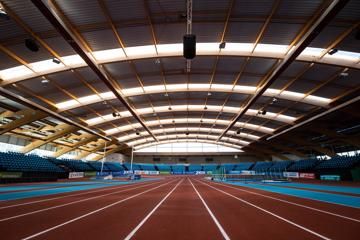 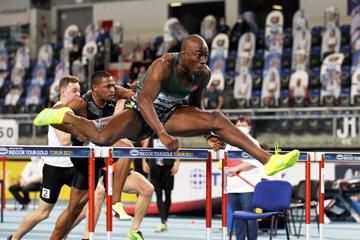