The Valencia Marathon Trinidad Alfonso EDP, a World Athletics Elite Platinum Label event, will return on Sunday (5) and as usual the organisers have brought together a mouth-watering line-up, headed by Kenya’s Geoffrey Kamworor.

The city of Valencia has witnessed a number of world records in recent years – at 5000m, 10,000m, 10km and the half marathon – and organisers aim for Valencia to be the epicentre of the running world again this Sunday.

Undoubtedly, all eyes are on the three-time world half marathon champion Kamworor, who turned 29 last month. The Kenyan ace is now fully recovered from the injury which prevented him from competing at the Tokyo Olympics and his last outing was a promising 27:01.06 10,000m at the altitude of Nairobi during the Kenyan trials before he got injured. Once recovered, the two-time world cross country champion focused exclusively on his build-up for Valencia, where he should far improve his relatively modest 2:06:12 lifetime best set on his debut in Berlin back in 2012.

Kamworor has great memories of Valencia, as he became a commanding world half marathon champion in the city back in 2018. “Valencia is the city of running, the atmosphere is special,” he said. “I managed to be world champion here, I know the circuit is incredibly fast and definitely it’s a great opportunity to record a quick time.”

Reflecting after the injury, Kamworor's coach, Patrick Sang, said: “To me, Geoffrey came back stronger physically but also mentally. He is a more professional athlete now. I do not set any target for athletes like Geoffrey, or any other athlete actually, because setting targets is putting pressure. I believe that serious athletes like them, they have the willingness to give their best and that’s always what we should ask from them."

Course record is the goal

A large group of pacemakers – headed by Alexander Mutiso, Bernard Ngeno and Victor Chumo – will target a steady 2:55 pace to go through the half marathon in 1:01:30, on schedule to break the course record of 2:03:00 set last year by Kenya’s Evans Chebet.

Kenya’s Lawrence Cherono should be one of Kamworor’s stiffest opponents. The 33-year-old was runner-up last year in a career best of 2:03:04 and finished just outside the medals at the Tokyo Olympics with a fourth place to his credit.

The Ethiopian contingent is also strong as it comprises four athletes to have dipped under the 2:05:00 barrier during their careers: Herpasa Negasa, Kinde Atanaw, Abebe Negewo and Chalu Desu. The former boasts a 2:03:40 PB set in Dubai in 2019 but he has barely competed since then, while Atanaw took the victory in Valencia in 2019 thanks to a 2:03:51 performance, although he could not go faster than 2:11:00 in his only appearance so far this season in Prague.

As for Desu, he finished sixth last year and will be looking to bounce back after a below-par outing in Chicago two months ago, while Negewo, eighth in 2020, will be making his debut at any distance this year. The other sub-2:05 athlete on show is Tanzania’s Gabriel Geay, who ran 2:04:55 in Milan last May and is fresh from a season’s best of 1:00:16 at the Valencia half marathon six weeks ago. Watch out too for Ethiopian debutante Andamlak Belihu, a 58:54 half marathon performer.

Germany’s Amanal Petros, who has a lifetime best of 2:07:18, recently set a national half marathon record of 1:00:09, also in Valencia, and Norway’s former European record-holder (2:05:48) Sondre Moen, who ran 1:00:15 on that occasion, also promises a fast time over the classic distance on Sunday. Spain’s Hamid Ben Daoud will attack the Spanish record of 2:06:52 following his half marathon PB of 1:01:05 here.

The women’s cast is led by Ethiopia’s Guteni Shone, holder of a career best of 2:20:11 set in Dubai a couple of years ago, while her season’s best is 2:21:46 to finish runner-up in Prague in May. The 30-year-old will be joined by her compatriots Azmera Gebru, who races her second marathon this year after clocking 2:22:58 in Tokyo in March; Bedatu Hirpa, owner of an identical time in Prague earlier this year; and Rahma Tusa, whose PB stands at 2:23:46.

The Kenyan squad includes 2:21:26 athlete Bornes Kitur, who ran barely six weeks ago in Rotterdam and will be eager to bounce back from her 2:30:41 clocking there, plus debutante Dorcas Tuitoek, a 1:06:33 half marathon specialist, and Nancy Jelagat, holder of a quick 1:05:21 clocking in the shorter distance.

Ugandan record-holder Juliet Chekwel won the Seville Marathon last year in a career best of 2:23:13 and should be a dangerous outsider on Sunday. While the course record of 2:17:16 set by Kenya’s Olympic champion Peres Jepchirchir last year doesn’t seem to be in jeopardy, organisers have planned a sub-70-minute split for the half marathon in the hunt for a sub-2:20 performance.

The weather looks set to be sunny but very windy, with the thermometer reaching 10-12ºC by the time of the event. 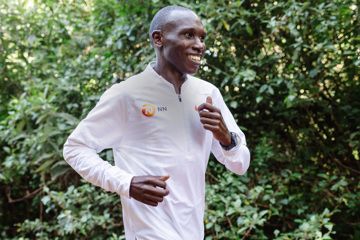 Having mastered the track, cross and half, Ka... 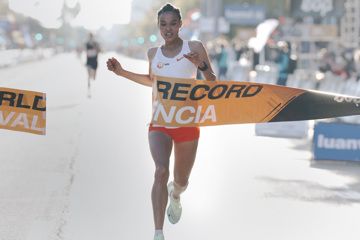