The line-up also features three of the five fastest men in the history of the marathon, as well as multiple world and Olympic champions Kenenisa Bekele and Mo Farah.

Lemma had raced 21 times over the marathon distance before his victory in London last year. He had previously racked up wins in Frankfurt and Vienna and finished third in three different Abbott World Marathon Majors, including in London in 2020.

The 31-year-old will be eager to show the victory was not a one-off by defending his title at this year’s London Marathon on Sunday 2 October, but he faces competition from an incredible line-up of athletes, including three fellow Ethiopians who are among the fastest marathon runners in history.

Bekele is the second-fastest marathon runner in history (2:01:41) and one of the greatest distance runners of all time.

Now aged 40, the three-time Olympic champion on the track will be hoping for one last dance to finally get a London Marathon victory to add to his incredible profile. Bekele has twice come close to winning in London, finishing third in 2016 and second in 2017, but injuries have hampered him in recent years, ever since winning the 2019 Berlin Marathon in 2:01:41.

Also in the field are Birhanu Legese, who, with a personal best of 2:02:48, is the third-fastest man in history, and Mosinet Geremew (2:02:55), the fifth fastest. Geremew finished third last year and was the winner of this year’s Seoul Marathon.

Farah, winner of 10 global titles on the track, will be making his fifth appearance at the London Marathon. The 39-year-old finished third in 2018 in 2:06:21, a British record which he reduced to 2:05:11 when winning in Chicago later that year. He came close to that mark at the 2019 London Marathon when finishing fifth in 2:05:39.

Vincent Kipchumba, runner-up in London in 2020 and 2021, also returns to the British capital, while Belgium’s Olympic bronze medallist and European record-holder will make his London Marathon debut. 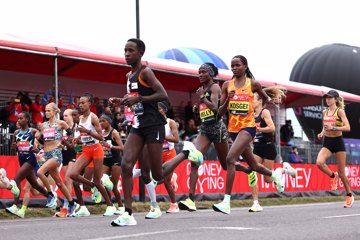