Eliud Kipchoge sliced half a minute from his own world record* to win the BMW Berlin Marathon, clocking a sensational 2:01:09 at the World Athletics Elite Platinum Label road race on Sunday (25).

There was also a stunning breakthrough for Ethiopia’s Tigist Assefa in the women’s race as she smashed the course record by more than two minutes with 2:15:37, becoming the third-fastest woman in history.

Just when it seemed Kipchoge had achieved everything he possibly could over the classic distance, the legendary pushed the world record further out of reach for the rest of the distance-running world.

Unlike his last world record run, the double Olympic champion went out hard on this occasion, passing through 5km in 14:14 and 10km in 28:22 – not just comfortably inside world record pace, but also well inside a projected two-hour finish.

Kipchoge maintained that pace through half way, which was reached in 59:50 – identical to his half-way split when he produced a sub-two-hour run in an unofficial orchestrated race in Vienna three years ago. His pace started to drop slightly from then on, and by 25km (1:11:08) his projected finish had slipped to just outside two hours, but he was still more than a minute inside world record pace.

Ethiopia’s Andamlak Belihu was just about staying level with Kipchoge up until this point, but the Kenyan superstar then gradually pulled clear and was out on his own. He passed through 30km in 1:25:40, then reached 35km in 1:40:10. By the time he passed through 40km in 1:54:53, his lead had grown to move than four minutes with Mark Korir having moved into second place.

His victory – and world record – now a formality, Kipchoge went on to cross the line in 2:01:09, taking 30 seconds off the world record he set in the German capital four years ago. Korir held on to second place in 2:05:58 and Ethiopia’s Tadu Abate came through to finish third in 2:06:28.

"I am overjoyed to have broken the world record in Berlin," said Kipchoge. "I wanted to run the first half so fast. No limitations.

"After 38km I knew I would be capable of breaking the world record. The circumstances were great, and so was the organisation of the event. I’m really happy with today and impressed by the fans and their support."

By contrast, several runners were in contention for most of the women’s race. A group of six women passed through half way in 1:08:13 – well inside course record pace – but by 30km, reached in 1:36:41, just three women remained at the front: Assefa, along with Ethiopian compatriots Tigist Abayechew and Meseret Gola. 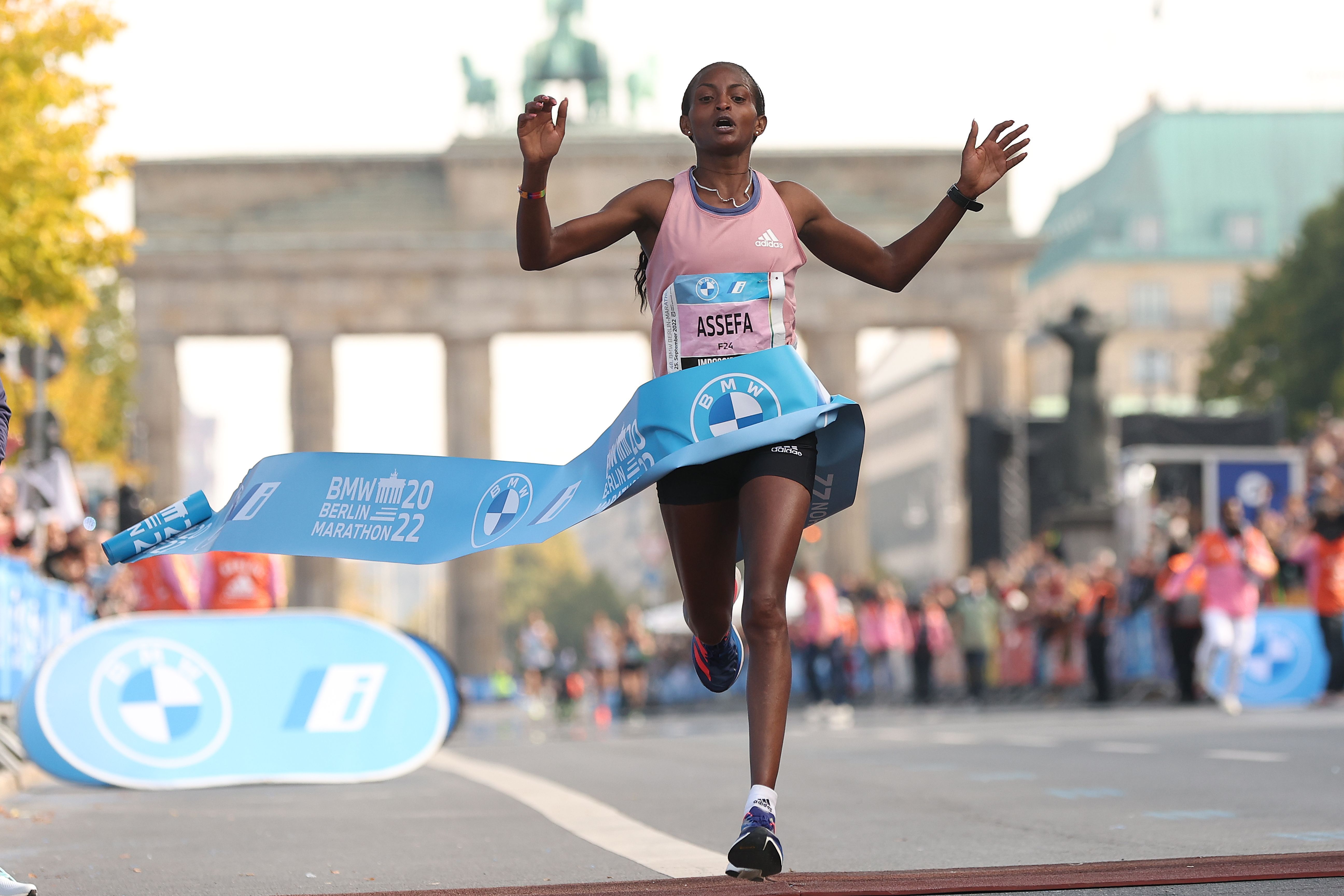 Despite running significantly quicker than she ever had done before, Assefa – a former 800m specialist – maintained her relentless pace and opened up a gap of about 20 seconds by 35km.

She continued to pull away from the rest of the field and crossed the line in an Ethiopian record of 2:15:37 – a time that has only ever been beaten by world record-holders Brigid Kosgei (2:14:04) and Paula Radcliffe (2:15:25). In a race of negative splits, Assefa's second half was quicker than her first (1:07:24) and was also faster than her official PB for the distance.