Running alone from 30km, Mizuki Matsuda won the Nagoya Women’s Marathon, a World Athletics Platinum Label road race, on Sunday (14) in 2:21:51 but was disappointed to fall short of her time goal.

Matsuda, who ran her PB of 2:21:47 at last year’s Osaka Women’s Marathon, had been targeting a Japanese record and sub-2:20 clocking to also improve the course record of 2:20:29. Reportedly in great shape, it was unfortunate for her that much of the race was severely affected with a headwind.

“My goal was to surpass my time from last year. So, I am very disappointed and feel very frustrated for failing to fulfil my time goal today,” said Matsuda immediately after the race. She then repeatedly apologised for not running a faster time. “For most of the race I felt I was fighting the headwind. The race was very tough after 30km when I started running completely alone, for I felt nothing but headwind after that point.”

Still, 2:21:51 is the second-fastest time of her career. It was also her third victory at the women-only race, with Matsuda’s only loss on Japanese soil being at the Grand Marathon Championships, Japanese Olympic Trials Marathon.

The race started fast – quicker than the planned pace of 3:20 for each kilometre. The first and second kilometres were both covered in 3:16. Thus, about four minutes into the race, the lead pack separated into two – a small lead pack consisting of Matsuda, Sayaka Sato, Mao Uesugi, Ikumi Fukura and pacemakers, and a large chase pack.

First to fall off the lead pack, after 10km, was debutante Fukura, followed by Uesugi after 12km. Three of the four pacemakers also left the race earlier than expected. By 13km the lead pack was reduced to three – Matsuda, Sato and pacer Monica Wanjiru.

As the race progressed, the wind started to pick up. After 22km, Sato too started to drift back leaving Matsuda and Wanjiru in front to fight the wind. At 30km Wanjiru left the race, leaving Matsuda to chase a fast time against the headwind. She had been planning to run a faster second half but the strong headwind marred her race plan. Gutting it out, she held on to run the fifth-fastest time over the Nagoya Marathon course.

“I wanted to set a personal best at the very least, so I am very disappointed with my time,” said Sato after the race.

Natsumi Matsushita, a debutante, moved up from the second pack to finish third in 2:26:26. A total of 13 runners cracked the 2:30 barrier.

When asked about her future plans at the end of the post-race interview, Matsuda said: “I am going to train hard and continue to chase the national record.”

BACK
Pages related to this articleAthletes
Mizuki MATSUDA 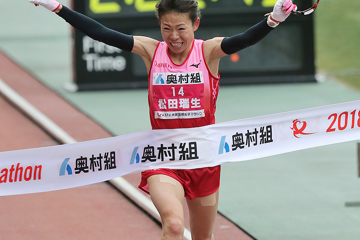 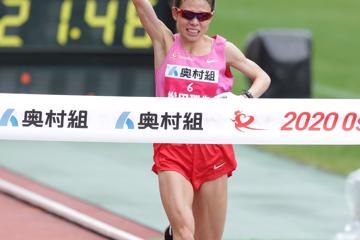