Eighteen months since the last edition of the Schneider Electric Paris Marathon, the World Athletics Elite Label race returns to the French capital on Sunday (17).

The 2020 race was initially postponed before being cancelled, then the 2021 edition was moved to October instead of its usual April slot on the calendar. Having received the green light to go ahead, this year’s race will have a mass field of about 35,000 runners, including a high-quality elite line-up.

The men’s field features five runners with sub-2:06 PBs. Kenya’s Nicholas Kirwa is the fastest in the men’s field, courtesy of his 2:05:01 PB set in Milan in May. Compatriot Joel Kemboi Kimurer, who is also racing in Paris this weekend, finished 18 seconds adrift of Kirwa in Milan, recording a 2:05:19 personal best.

Elisha Rotich’s career best is one second faster than Kemboi Kimurer’s. The 31 year-old Kenyan, who clocked that time when finishing third in Amsterdam two years ago, also competed in Milan this year, finishing 10th in 2:06:44.

Abdi Fufa carries strong recent form into this weekend’s race. The Ethiopian set a PB of 2:05:57 when finishing second in a quality field in Ampugnano in April.

Hassan Chahdi’s record of 2:09:11 makes him the fastest Frenchman in the field. Following his 45th place finish in the marathon at the Olympic Games, he clocked 31:12 for 10km three weeks ago, which makes his current shape difficult to gauge. That’s not the case for Florian Carvahlo, however, who ran 1:01:05 at the Paris Half Marathon last month. He’s now hopeful of improving on his 2:10:22 PB set in Valencia two years ago.

The women’s race also looks set to be a tough contest.

Ten years after her victory on the streets of the French capital, Priscah Jeptoo returns to the Paris Marathon. The Kenyan went on to take the silver medal at the World Championships later in 2011 and then earned a medal of the same colour at the 2012 Olympic Games. She also won the London and New York marathons in 2013, but hasn’t made it on to a marathon podium since then.

While Jeptoo is the biggest name in the women’s field, Ethiopian duo Waganesh Mekasha and Sifan Melaku could start as the slight favourites, based on recent form.

Mekasha, a former track specialist, has a marathon best of 2:22:45 set in Dubai in 2019. She went on to achieve second-place finishes in Dongying and Shanghai later that year, but hasn’t raced since. Melaku, meanwhile, last raced in February 2020 when she finished third in Seville in a PB of 2:23:49.

Tigist Memuye also shouldn’t be discounted. The 31-year-old Ethiopian clocked a PB of 2:24:23 in Geneva just five months ago; a repeat, or even an improvement, of that performance should put her in contention for a podium finish.

BACK
Pages related to this articleAthletes
Priscah Jeptoo 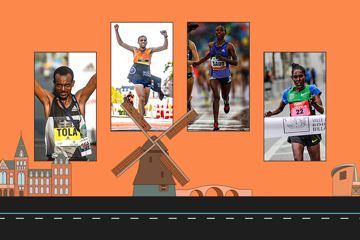