The 17-year-old entered with the best throw by any U18 athlete this year courtesy of a South American U18 record 21.40m in August. He underlined his favourite status from the get-go, putting his first shot out to a personal best 21.58m to send the crowd cooing.

Sasia improved further with his last effort, notching 21.94m to give him a 72cm lead over second place, Belarusian Aliaksei Aleksandrovich. His final round best means Aleksandrovich stays within touching distance of the home hero ahead of the second stage, after which combined results decide the medallists.

In the women’s shot put, Xinhui Li, China’s U18 world leader, was similarly dominant. Three of her four efforts would have won her the stage, though it was her third round 18.42m that stood as her best. Belarus’ Yelizaveta Dorts was next best with 17.60m.

The favourites also lived up to their billings in the men’s and women’s 2000m steeplechase races.

Ethiopia’s African Youth champion Abrham Sime was a cut above in the men’s. Wearing the name Tufa on his bib, the 16-year-old ran within himself through the first km before ramping up his pace to win in a personal best 5:34.94. It gives him strong hopes ahead of the cross country distance decider on Monday. Tunisia’s birthday boy Ahmed Sayf Kadri was next through the line in 5:44.56 – a personal best that will go down well with a slice of cake.

Ricuo Xi impressed in the women’s 5000m race walk, and will fancy her chances of retaining that top ranking after the disqualification of Belarus’ Hanna Zubkova, the fastest this year of those entered. After breaking on two kilometres, the Chinese walker continued to push and survived two warnings to win in 22:23.26, a personal best and the fastest time by a teenager in 2018. It gives her an advantage of more than six seconds over Mexico’s Sofia Ramos Rodriguez, who finished second, also with a personal best.

Ukrainians prosper in the field

Any one of Ukraine’s Valeriya Ivanenko’s four hammer throws would have won her the first stage of the women’s contest, all of them thudding down beyond 71 metres, while the best of the rest toiled in the 60s. Ivanenko’s best was her fourth, a 74.90m that gives her more than five metres of breathing space over Egypt’s Rawan Ayman Ibrahim Barakat.

The men’s hammer was also won by a Ukrainian, as the top three threw to form. Event favourite Mykhaylo Kokhan spun out to 84.90m in round three to win, while Valentin Andreev, of Bulgaria, recorded 82.29m for second, and China’s Qi Wang 79.46m for third.

High jumper Yaroslava Mahuchikh made it a better day still for the Ukraine team. She had the stage won at 1.87m, clearing to see off Russia’s Mariya Kochanova. Mahuchikh, the European U18 champion, went over 1.92m first time – and with some daylight – before fouling out at 1.95m.

Joshua Cowley made good use of a 2.6 m/s tailwind to edge proceedings in stage one of the men’s long jump. The Australian caught a flyer in round three to reach 7.71m and carry a 6cm lead over Cuba’s Lester Alcides Lescay Gay, who himself finished 6cm ahead of third place Jason Donavan Tito, of South Africa.

Entering as the fastest in the field, Kenya’s Edina Jebitok won the fastest of the two stage one women’s races in 4:16.68 to head into the cross country as the 1500m favourite. Australia’s Jaylah Hancock-Cameron's personal best of 4:18.44 earned her second in that race and overall. Lemlem Hailu, of Ethiopia, won the first race in 4:25.03, ranking her fifth overall at this stage.

Edinah Jebitok, winner of the 1500m stage at the Youth Olympic Games in Buenos Aires

The fastest entrant also earned the quickest time in the men’s 1500m, as Ethiopia’s Melese Kefale moved with 600 metres remaining to win the second heat in 3:52.95. He was quick to congratulate Morocco’s Anass Essayi, who came home second in the race and overall in 3:53.75. First heat winner, Burunidan Jean de Dieu Butoyi, enters the cross country ranked third overall, after his 3:54.32 performance.

The sun came out for the men’s short sprints, which concluded the day’s programme, and it was Luke Davids, of rainbow nation South Africa, who prospered. Despite the 2.3/s headwind in his heat, the 17-year-old left the field in his dust to win in 10.56. Nigeria’s Alaba Olukunle Akintola was second in that race in 10.76 to place second overall at this halfway stage. 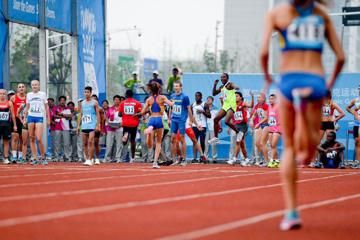 More than 170 nations set to compete at Bueno... 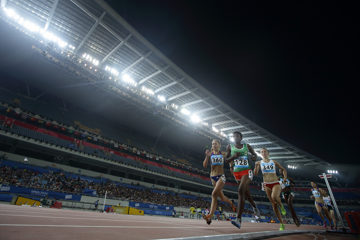 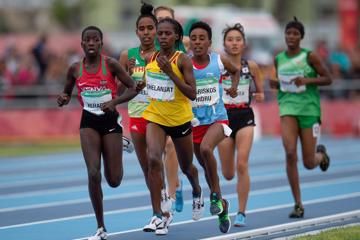