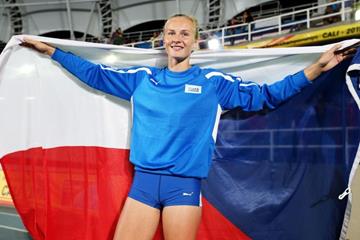 When it comes to the high jump, size matters.

Never was this old adage more in evidence than on Friday night in Cali as Czech high jumper Michaela Hruba, who stands at 1.88m in her socks, confirmed her growing reputation as one of the event’s future stars.

Hruba cleared 1.90m in the final – eight centimetres better than her nearest rival – to give the Czech Republic their first high jump gold in the history of the IAAF World Youth Championships, and just their third ever.

Of course, there are many more attributes needed other than sheer size to make it as a high jumper, but thankfully for the Czech 17-year-old, she appears to have the rest of them in abundance.

For Hruba, the journey to getting the gold medal has been a long one, and not just due to the 10,000 kilometres separating her home near Brno in the Czech Republic and the site of her victory in the Colombian city.

She comes from a family of four, but one with little sporting background.

For a few years, she was best known as a heptathlete, but soon gravitated towards her best event, the high jump, and that is where she plans to stay for the foreseeable future.

Hruba was also a competitive cyclist for a number of years, but eventually turned her back on that sport. “The races were too long for me,” she said.

These days, Hruba trains four times a week under the guidance of coach Ctibor Nezdaril at the Brno athletics club.

As a Czech athlete, there is no shortage of idols in her own country. “Zusana Hejnova is perfect,” she said, “but she doesn’t do the high jump. My idol is Alessia Trost.”

The Italian high jumper, incidentally, is the same height as Hruba and was of a similar standard to Hruba at the same age. In 2009, Trost was the world youth champion in Lille and went on to become world junior champion in 2012.

The pair competed against each other for the first time at the Banska Bystrica indoor high jump competition in February and, fairly naturally, got talking; especially as both of them are talented linguists and speak English well.

Last year, at the age of 16, Hruba finished second at the IAAF World Junior Championships in Eugene, clearing a Czech junior record of 1.91m in the final which remains her personal best.

In Cali, Hruba towered over her most of her competitors physically and metaphorically – Latvia’s silver medallist Ieva Turke, for example, is 1.71m to Hruba’s 1.88m – but going in as a world junior silver medallist proved both a blessing and a burden. “I felt the pressure,” admitted Hruba.

Whatever she felt internally, though, she kept a calm exterior.

When the field had been whittled to just five athletes at the height of 1.82m – at which all four of Hruba’s competitors failed their opening attempts – she sauntered up to the bar wearing full-length tights and cleared it with room to spare.

After going clear at 1.85m on her second attempt – a height at which the remaining competitors bowed out – the world youth title was finally, inevitably, hers.

Showing a professionalism that belied her age, Hruba put celebrations on hold until the event was completed. “It was hard to stay relaxed after I knew I had won gold,” she says, “but I felt very good.”

At 1.90m, she roused the Czech supporters who had positioned themselves behind the athletes and, with their rhythmic clapping echoing in her ears, sailed over 1.90m without so much as stroking the bar.

Rio on the radar

Hruba then moved the bar up to 1.94m, the qualifying standard for the IAAF World Championships in Beijing next month.

It was a height she couldn’t clear in each of her three attempts, not that she let that dampen the celebration of her first major international title.

With the competition bringing her 2015 season to a close, it was time for Hruba to enjoy the fruits of her labour.

“It’s my biggest medal,” she said. “I will celebrate now with my friends here and then at home with my parents.”

Looking further ahead, Hruba’s eyes are already set on the IAAF World Junior Championships in Kazan, Russia next summer, where she will hope to go one better than her silver-medal performance in Eugene.

If she can add a few centimetres to her personal of 1.91m between now and then, there’s a certain other major event to think about next summer. “I hope to be in Rio 2016,” she added.

Few would bet against it.

After all, Hruba’s got the height, the class, and perhaps most importantly of all, has now proven she has the ability to perform well when it matters most.

As a result, she can stand tall as a world champion.