Being a mum has certainly not proved a bar to success in the shot circle.

Just six months after giving birth to her first child, double Olympic champion Dame Valerie Adams snared a silver medal at the 2018 Commonwealth Games. Two years after giving birth to twins, former world champion Christina Schwanitz returned to win bronze at the 2019 World Athletics Championship in Doha and another mum making her mark is Portugal’s 2021 world number one Auriol Dongmo, who later this week will be gunning for gold at the European Indoor Championships in Torun.

Since Dongmo gave birth to her son in June 2018, balancing motherhood and training has clearly brought the best out of the 30-year-old Portuguese thrower.

On her return to international competition in 2020 she set no less than six national records (two indoors and four outdoor marks) and hurled the 4kg shot out to a best of 19.53m to end the year joint number one on the world lists. She has built further on that form during the 2021 indoor campaign, unbeaten for the year highlighted by a Portuguese record and world leading mark of 19.65m in Karlsruhe.

So what role has being a mum played in Dongmo’s success over the past couple of seasons?

“It has made me more open to seeing things from another perspective,” she explains. “I now have an extra motivation to fight not only for myself but also my son. This has made me more resilient and more focused in my desire to achieve better results.”

Born and raised one of four siblings in Ngaoundere, Cameroon, Dongmo was a keen handball and basketball player at school until she was introduced to the shot put at 15. 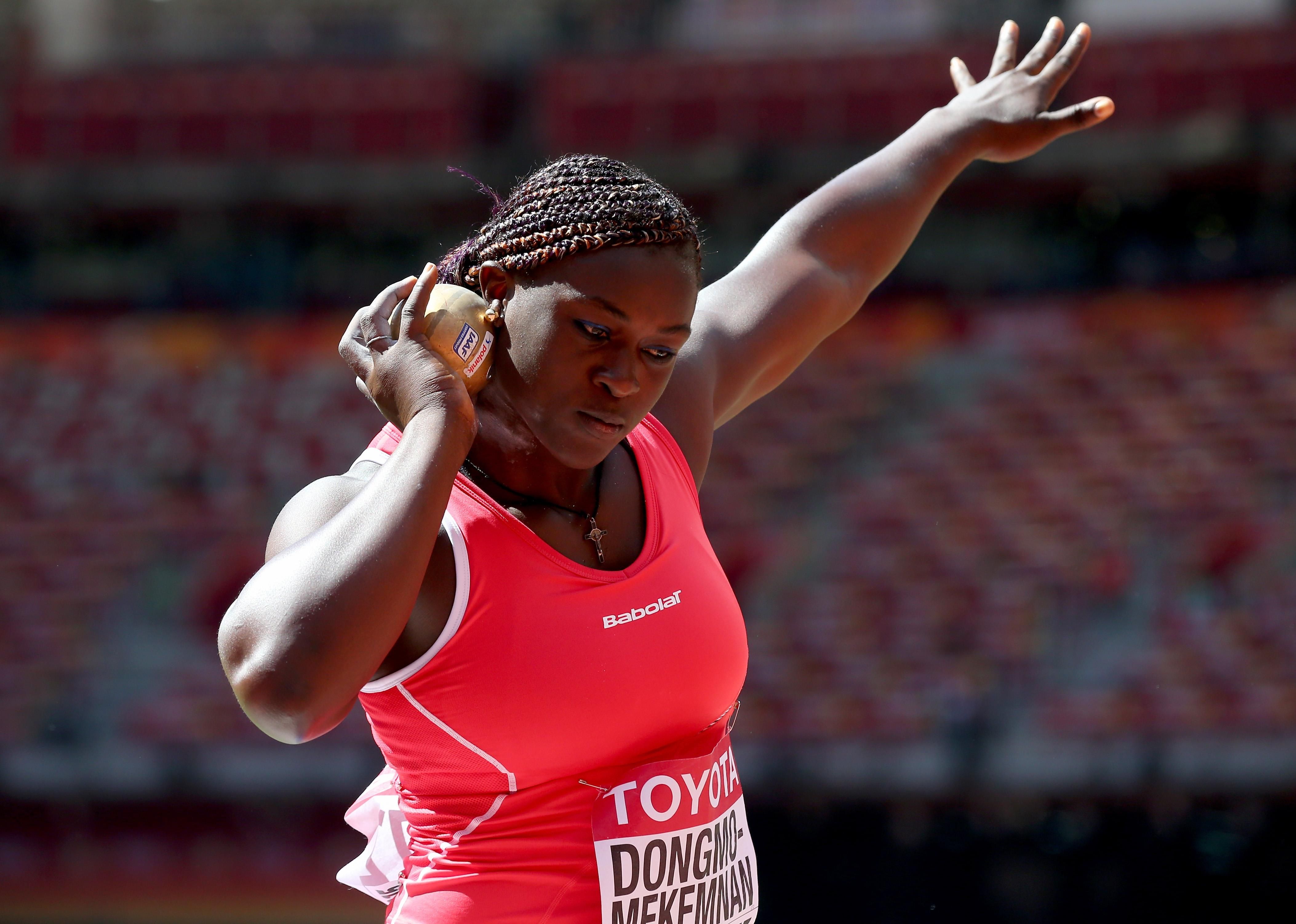 “A sports teacher at school invited me to throw at a school, championship because he saw that I was strong,” says Dongmo, whose father worked a policeman. “I didn’t want to go but he pressured me a lot and convinced me to compete. Although I had not competed in one training session, I finished third to win a bronze medal.”

Nonetheless, Dongmo was not instantly taken with the shot. For the next two years she focused on handball only to finally succumb to the pressure of coaches and others persuading her to continue as a thrower. With some initial reluctance she switched her focus to throwing and committed to training three times a week.

Naturally big and strong – despite her parents being relatively small – she quickly made gains but with no specialist shot coach in her city of birth, in 2009 she moved to the capital city of Yaoundé to improve her athletics education.

Joining a specialist coach, Gaston Songkeng, and a group of throwers, she quickly made technical gains and on her international debut in 2011 the then 21-year-old made a huge breakthrough, winning the All African Games title in Maputo with a national record throw of 16.03m.

“That was a very important win for me,” she explains. “I was a young athlete at that time and the federation selected me to gain experience. I went into that competition with a PB under 15 metres, so to win with 16.03m was a big surprise and it gave me huge satisfaction.”

More precious metal was secured in 2015 as she defended her All Africa Games title in Brazzaville and later that season improved her PB to 17.64m.

But in 2016 in pursuit of greater success, she decided to leave Cameroon to live and train in Morocco under the coaching guidance of Mohamed Fatihi.

The move also gave her the opportunity for greater competitive opportunities and under Fatihi’s guidance that year she set three national records, improved her PB to 17.92m in Olympic qualification at the Rio and retained her African title.

Despite being unable to match her national record throw in qualification - she placed 12th with 16.99m in the Olympic final - it could not hide the fact 2016 had been a big success. 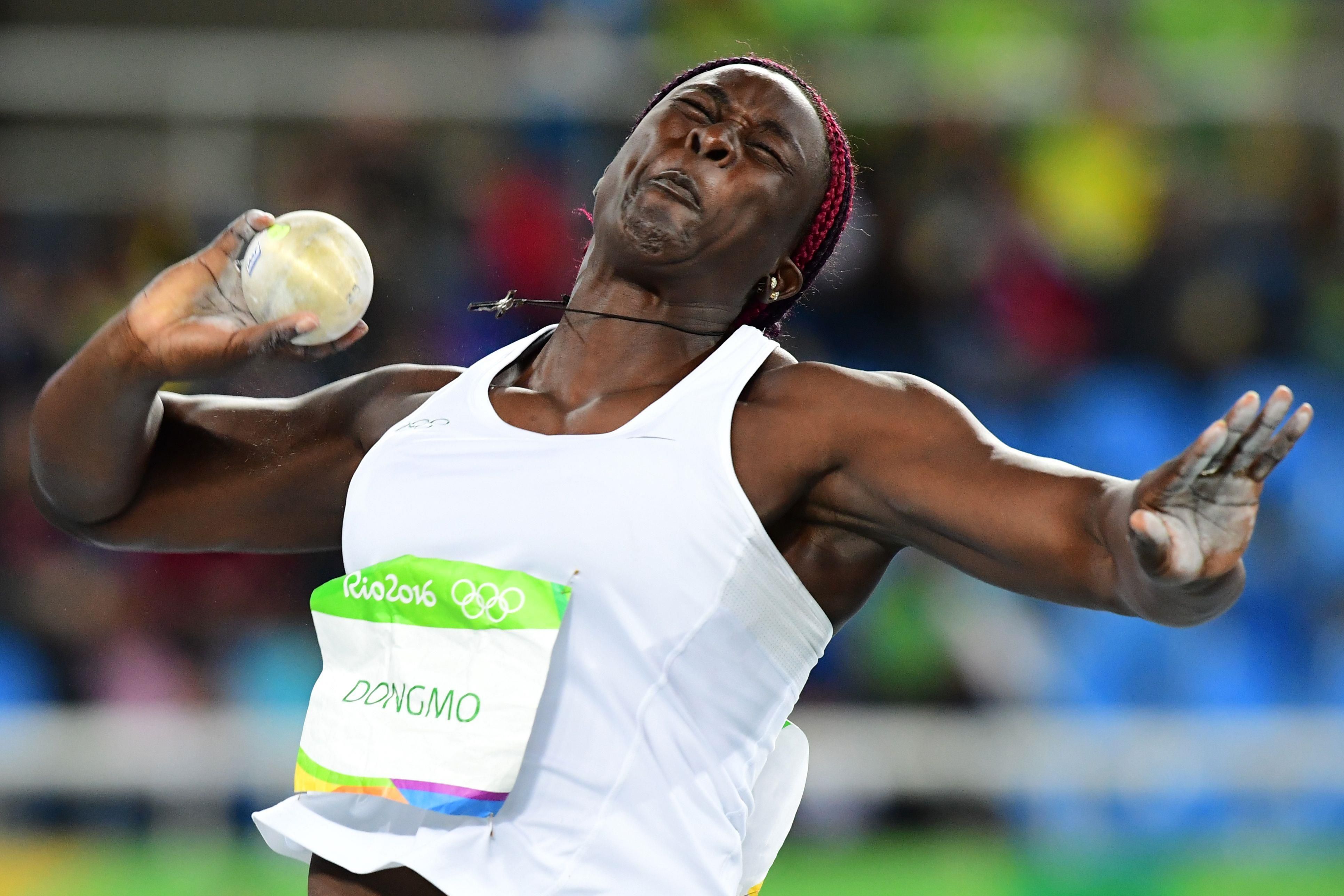 “Reaching the Olympic final with a personal best meant I’d achieved two of my big goals,” she recalls. “To reach the final made me very happy.”

In March 2017 she moved to Leiria in Portugal to take the next step in her career development where she came under the guidance of her current coach, Paulo Reis, the national throws coach.

Dongmo had access to excellent facilities, good weather and a great overall training environment. The training regime suited her requirements yet she insists Reis offers far more than a good training programme.

“Paulo’s main quality is he is always concerned about your overall life situation,” she adds. “For him, it is not just about the training but that you are happy in every area of your life. He is also a great communicator and always make himself available.”

In 2018 it was all change for Dongmo as she took a year out of the sport to give birth to her son and also decided to change allegiance from Cameroon to represent her new homeland of Portugal.

“I love the country and the people and since I arrived here in 2017 everybody has been so nice to me,” she explains. “I found in Leiria all the conditions to improve as a thrower and reach all the goals I have set for myself. My child was born here and Portugal is where I intend to live long after my career has ended.”

Juggling motherhood with training and not yet ready to compete internationally she opted to compete only domestically in 2019. Achieving a season’s best of 17.90m to win the Portuguese title she admits returning to competition as a mum was initially “more difficult than I expected.”

However, making big gains physically and technically through the winter of 2019-20 she enjoyed a fantastic year last season. Unbeaten in her 10 outdoor competitions, she improving her outdoor best by more than a metre with her national record of 19.53m set at the national championships enabling her to end 2020 a joint world number one with world champion Lijiao Gong.

“The 19.53m was really good for me. I was happy but I acknowledge the most important thing is to be able to throw these distances in international competition,” she adds. “But 2020 proved to me I could throw far and compete with the best in the world.”

Focusing more on the intensity of her training, she admits she has a relatively small training volume of between three to four throws sessions per week and two to four gym sessions. During the winter of 2020-21, Dongmo and her coach focused on improving power, speed and technique in the circle and she went on to prove the fruits of her labour with that new national indoor record and absolute personal best of 19.65m.

“Karlsruhe was special. I was happy because I always want to throw my best in the top competitions,” she adds.

In the shorter term, Dongmo will enter this week’s European Indoor Championships in Torun the favourite for gold, where her aim is to further “improve my PB.”

Beyond that, the goal is to continue to improve and “achieve a big result” in Tokyo, where should Dongmo medal she would become the first Portuguese athlete to win a throws medal at an Olympic Games.

It is clear a task not beyond her.

“I think I have the physical talent, and I believe in myself and the work I am doing,” she explains. “As I’ve also proved over time I’m a good competitor in top events.”

BACK
Pages related to this articleAthletes
Auriol DONGMO