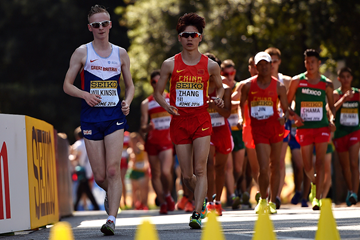 Wilkinson walks all the way into medal contention

British race walking used to lead the world. And then the rest of the world caught up.

Great Britain claimed 15 Olympic medals in the 20th century, but the last of those came 52 years ago in Tokyo when Paul Nihill took silver behind Italian champion Abdon Pamich.

Ken Matthews had already triumphed at 20km in 1964, but the rest, as they say, is silence on a global level.

But Callum Wilkinson could be about to bridge that lamentable gap at next month’s IAAF World U20 Championships Bydgoszcz 2016 if he walks as well as he did at the IAAF World Race Walking Team Championships Rome 2016.

The fair-haired Briton defied the Italian heat to duel for a medal from gun to tape, and it was only a last 400m sprint that denied him gold.

A mere seven seconds separated first to fourth, with Wilkinson cruelly forced to suffer Mexico’s Noel Ali Chama flying out of his slipstream to dive over the line for third – a heartbeat ahead of the athlete who represents Enfield and Haringey AC in England, but like the thoroughbred he is, comes from Newmarket.

In fact, it was a local race there called the Moulton Five Miles that first tweaked his interest as a 15-year-old.

His dad knew the organiser, who happened to be the 1966 Commonwealth, then Empire Games, champion, Ron Wallwork.

The young Wilkinson fancied a go, but ironically for an event that wends its homely way through country lanes, it took another five attempts until he finally broke the tape on 4 June at this year’s edition.

No matter, the seeds of that first attempt in 2012 were sown, and Wilkinson decided to turn his back on other sports including table tennis where he ranked second in his county.

He set a British junior record of 41:34.63 in July last year – knocking 18 seconds off the previous mark that had stood since 1987 – when finishing seventh in the 10,000m race walk at the European Junior Championships in Eskilstuna, Sweden.

Before Rome in May this year, Wilkinson recorded 11:39.87 for 3000m indoors at the England U20 Championships in Sheffield in January, and then a sharp 19:39.69 over 5000m in Bratislava at the end of the same month. Both were national junior indoor records.

Wilkinson trains at the National Race Walking Centre based at Leeds Beckett University where he is a student, so does soon-to-be Olympian and national 20km record-holder Tom Bosworth.

In fact, the one group of elite race walkers in Great Britain all fall under the tutelage of ex-European Championships race walker Andi Drake, and head coach at the centre.

Up till the advent of the centre in 2009, Britons by and large did their own thing. Ian McCombie, the man whose 27-year-old record Bosworth broke earlier this year, did all his training and racing while working as a full-time solicitor in Leeds.

But there was nothing coordinated until Drake and the National Centre appeared. Now the likes of Wilkinson, Bosworth and a clutch of other young talents are reaping the benefits.

It’s tricky to get goose bumps in 25 degrees of heat, especially after you have finished in the worst possible position, so we are led to believe.

But Wilkinson, sitting just to the left of cloud nine after his tremendous race in Rome, pointed to his arms.

“Look at me: I have goose bumps,” he said. “This is a great championships and I am fourth in the world.”

The teenager recalled how even he was surprised to be at the sharp end all the way through the race, especially as he posted a negative 18-second split.

“I didn’t think I would be leading at the beginning of the race as the Chinese were so quick,” Wilkinson added.

“I was so happy as it is a massive British junior record.

“I feel I worked really smart in that race and with 100m to go I thought I could get a medal, but then he (Noel Ali Chama) kicked again. I could have done better had it been cooler.

“Rome was a phenomenal venue, but I was a bit confused whether I still had a bit more to go at the end. Maybe that also made a difference?

“But it was such an honour to compete with the Colosseum in the background.”

The Newmarket gladiator believes British race walking is en route to former glories. Another polished race walk in Poland could see a union flag on one of the three poles at the medal ceremony come 23 July.