Without World Cup distractions, Ibarguen is seriously searching for 15 metres

Usain Bolt is a Manchester United fan, David Rudisha is a noted Arsenal supporter and English Premier League clubs seem to dominate the football affections of athletes from the Caribbean, Africa and often Asia but Caterine Ibarguen can’t hide her love for her home town club back in Colombia, Atletico Nacional.

As it was the day before the World Cup final when we chatted it didn’t seem entirely inappropriate either that we should be talking about football first rather than her feats at the IAAF Diamond League meeting in Rabat the night before.

“I’m an avid supporter of Nacional, a team from Medellin. I guess not many people outside of Colombia would know that. When I am home I try to watch their games if they are on TV and I keep in touch with their results when I am away.

“I’ve been often invited to their games and I’d love to go more often but as I train in Puerto Rico during the summer it isn’t very convenient.

“But I’ve also watched every game Colombia played in the World Cup and was cheering for them from afar. I know some of the players personally quite well including David Ospina (Colombia’s first choice goalkeeper who started his career at Nacional) and Juan Cuadrado, who also comes from Medellin.”

Cue some good-natured banter as this writer is English and his national team knocked out Colombia in the last 16 of the World Cup after a tense penalty shootout but every cloud has a potential silver lining.

“Maybe some more athletics, and my results, has got in the papers and on TV there; but I have some doubts. Colombia is a football nation and I’m sure now that Colombia is out, the media are talking about the other teams in Russia and not athletics.”

Tokyo on the horizon

However, Ibarguen has been the focus of domestic attention in the past not least because she was one of three Colombians – the others being a cyclist and weightlifter – to strike gold at the Rio 2016 Olympic Games.

Along with her silver in London four years before – and last summer she returned to the Queen Elizabeth Olympic Park to get a world championships silver medal after global titles in 2013 and 2015 – she also is one of only a handful of Colombians with two Olympic medals to her name and nobody from her country has more.

As she has not ruled out staying in the sport until Tokyo in two years’ time, when she will be 36, it’s certainly not beyond the bounds of possibility that she could add to her tally.

If she gets on the podium in Tokyo she would almost certainly be the oldest Olympic women’s triple jump medallist ever, and she already has the accolade of being the oldest gold medallist after winning in Rio at the age of 32 years and 184 days.

Her performance in Rabat attests to her longevity and could seriously look at Tokyo. She is quite demonstrably still going strong at the age of 34, almost 20 years after she first appeared in a major international competition when she competed in the high jump at the inaugural IAAF World Youth Championships in 1999.

In Rabat, she opened with 14.70m, which alone would have been sufficient to have extended her unbeaten streak in her specialist event this year, then improved to 14.71m in the next round.

After jumps of 14.53m and 14.40m in the following two rounds, she uncorked her monster winning jump and world-leading mark of 14.96m – it’s worth noting that nobody older has ever jumped further in the history of women’s triple jumping – in round five before finishing with 14.91m.

Getting the wind behind her

Her last two jumps, in the shelter of the main stand of the Prince Moulay Abdellah stadium, had almost no wind assistance leaving her to muse on what might have been with a little bit of a breeze on her back.

“I am very satisfied. My winning jump was a great jump and it was a great victory, but I think I was still able to do better tonight. I wanted to jump 15 metres.

“Every time I jump now, I want to do 15 metres because I am hungry for it. I haven’t jumped 15 metres since I won in Rio so I need it. Winning the Diamond League is very important for me, I have a good record in it and won it four times (consecutively between 2013-16) but I am also jumping for a good distance.”

With a perfect record in her four 2018 IAAF Diamond League outings – her win in Rabat adding to ones in Shanghai, Oslo and Paris – she has qualified without any problem for the final of her discipline in Zurich on 30 August.

She’s likely to do one or two meetings in Europe during the weeks before but next on her agenda is a trip home at the end of the month after a week’s training in Puerto Rico.

It’s not to watch football, there’s no time for that, but to defend her triple jump title from four years ago in Mexico at the Central American and Caribbean Games which, for added motivation, are being held this year in the Colombian city of Barranquilla.

Going over 15 metres in front of her home crowd, which nobody has ever done in Colombia, not even Ibarguen who jumped 14.99m in the country’s capital Bogota in 2011, would certainly generate a few headlines.

It might even put football in the shade, if only for a day or so. 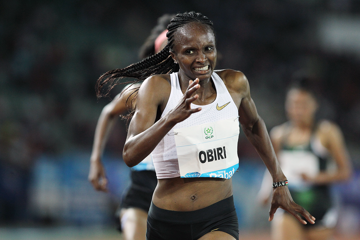 Obiri and Kigen get world-leading marks in Ra... 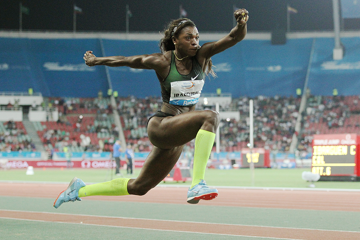