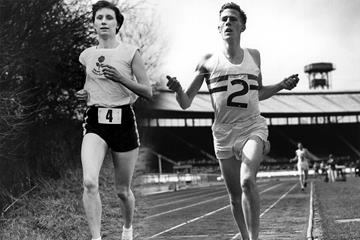 Leather and Bannister – the similarities and differences of two trailblazers

The world reverberated with the news that Roger Bannister had become the first man to run the mile in less than four minutes on 6 May 1954. Twenty three days later, a landmark was achieved in the women’s mile when fellow Briton Diane Leather became the first to dip under five minutes – unheralded, and, at the time, without fanfare.

Bannister’s progress continued to top the sporting agenda as he beat his Australian rival, and by then world mile record-holder, John Landy at the British Empire and Commonwealth Games in Vancouver, before hoovering up the European 1500m title and retiring to start a stellar career in medical research.

Leather remained as a runner until 1961, but while she won two silver medals in the 800m at the European Championships, and captained the women’s team at the 1960 Rome Olympics, she never got the chance to run at her best distance in a major international championship.

Less than a month after Bannister had clocked 3:59.4 at the Iffley Road track in Oxford, Leather recorded 4:59.6 at the Alexander Sports Ground in Birmingham – reacting with the words “Oh good. At last” – and the following year she ran 4:50.8 and then 4:45.0, which remained a world record until 1962.

By then Leather – who had also set an 800m world record of 2:09 in 1954 – had retired, aged 27. Women’s records for the mile were not ratified until 1967, and she never had the opportunity to race over her preferred distance at an international championship.

Both runners were honoured at the World Athletics Heritage Mile Night in Monaco last month with awards being made to Leather’s daughter, Lindsey Armstrong, and Bannister’s daughters Erin Bannister-Townsend and Charlotte Bannister-Parker.

Lindsay Armstrong had no idea that her mum had been an athlete, or indeed a world record-holder, until she was 11.

“She didn’t tell me herself,” recalled Lindsay, who runs Shakespeare’s Schoolroom and Guildhall in Stratford-upon-Avon. “I learned about it when I found some scrapbooks that one of her brothers had kept. They were on the bottom shelves somewhere in the sitting room, just tucked away.

“I didn’t know what to do about it – it was almost as if I was being naughty!

“In the end it wasn’t really such a big conversation. She said it was just something she used to do.

“I don’t want you to get the wrong idea. She wasn’t shy and retiring. But it was just something she’d done.

“On the day she broke five minutes for the mile, she had broken an 800m record earlier that day – it may have been a national record. So she had two great legs on her.

“She ran in the Olympics in 1960, but again they still didn’t allow her to run the mile. There was nothing further than the 200 until 1960 and then they were allowed to do the 800m. So she was the women’s team captain but she didn’t get to the final. Because, you know, it was six years past her prime. We have still got her Olympic jacket at home. She stopped soon after that.

“She didn’t talk about her athletics. I know that in later years according to people that knew her then that she felt somewhat slighted, and instead of letting it upset her she just turned away from athletics earlier than she would have done.

“But she did a lot of officiating in athletics after her career. So she didn’t really turn away from the sport. She always loved it.

“She was an extraordinary athlete. She ran the 400m, she ran the relay, she was a cross country champion. She did a huge range of distances.

“She was a chemist and she went on to be a child social worker. That was her passion. She was more than just an athlete. She was an extraordinary woman who really did change lives.

“She was beautiful – so beautiful. You could see it in the film we just watched. And it was really lovely to see. We were so proud of her. To be here with all these other extraordinary runners – she would have loved to be here.”

By contrast, Bannister’s daughters Charlotte, who is a Church of England Minister at the University Church in Oxford, and Erin, an accomplished painter, recalled their father introducing athletics into their life from the point where they could remember.

“I think it would be fair to say that my father was a pretty humble man throughout his life considering what he achieved both medically and athletically,” said Charlotte.

“But in terms of us being aware that he was a runner and that running was important was something that happened right from the start of my very consciousness.

“We were encouraged to run every day. There was a little park outside our house which was a square, and he would run every day of his life, right until he had a car accident and he no longer could. But it was deeply engrained within our childhood. Much more… why it was good for you…

Her sister continued the narrative: “Why he loved to be outside… being outdoors, and including other sports, including climbing and walking, and tennis, and sailing, and a whole range of sports. He was always trying things that weren’t necessarily to do with athletics. So things like sailing were quite dangerous, but they gave us enormous fun.”

Charlotte recalled: “He would train us to get off the starting line. He just loved watching people run, and he would come to our school sports days and he would look around the field and he would say that young boy or that young girl, they have got great style.

“And then of course he was broadcasting at the Olympics as a journalist – that was one of the times we were allowed to watch television, to see the Olympic Games and the Commonwealth Games.

“He didn’t generally talk about his athletics, but during anniversaries of his achievements he would sometimes talk about them, and he would talk about how his father had taken him to see athletics very early on.

“I remember going to Crystal Palace with him a lot. And then of course when he was Chairman of the Sports Council he would have to attend a lot of sporting events and if my mother couldn’t make it he would take one of us children.

“And then of course there were interviews. When something happened in the athletics world, he used to get rung up by the BBC and asked to comment on things to do with drugs, apartheid, politics…”

Both recalled travelling to Vancouver in 1967 for the unveiling of a statue depicting the decisive moment of the Vancouver Mile race, when Landy looked back inside him as their father was making his decisive burst of speed in the lane outside.

Charlotte added: “We used to have very interesting Sunday lunches, where there were always discussions around politics, athletics and sport, and it would be a summary of the week’s news and what was going on in the wider world. So there was no sense of not being involved in what was his passion – or of him not passing on his passion to us.”