It’s a sunny afternoon in Bydgoszcz, Poland. Three men are waiting to receive their medals. Medals they have all worked really hard to get. And sometimes it’s difficult to tell just how hard the journey has been to make it on to a podium.

At the Youth Olympic Games in Nanjing two years ago, Filippo Tortu lined up for his first-round heat in the 200m against some of the best runners in his age group. He produced the best finish of the field to cross the line in second place in a personal best of 21.38, a position which opened the door to the Youth Olympic final. It was not meant to be.

As he dipped for the line, Tortu fell and broke his ulna and radius in both his arms. It was the end of his Olympic dream.

“It was an accident,” he explained to a local newspaper at the time. “It could have happened to anyone.”

Fast forward two years, and in the setting of the IAAF World U20 Championships in Bydgoszcz, Tortu is all smiles. He doesn’t mention his freak accident, although the scars on both arms remain visible.

He can’t stop fiddling with the silver medal which IAAF President Sebastian Coe has just presented him with. “It’s special, very special to have received the medal from the president,” he said.

The night before, Tortu had lived up to expectations and grabbed silver in the 100m final which USA’s Noah Lyles dominated from start to finish.

He briefly ponders how nice it would have been to get gold, but he quickly realises the enormity of what he has achieved.

“When I crossed the line, I suspected I was second but I wasn’t sure. I felt I was trailing in the first stages of the race but then I made up ground. I knew I was ahead of (Burke) of Barbados but I couldn’t see the rest of the field. Well, unfortunately I could see Lyles was ahead and celebrating already.

“Seeing my name as second on the screen, that was a great feeling.”

Sprinting is in the genes

Born in Milan, Tortu hails from a family of sprinters. “The only one who has never done athletics in my family is my mum!” he jokes.

From Giacomo, his grandfather, to his father Salvino, sprinting runs in the veins of the Tortus. Coached by his father – obviously – Tortu says the only sprinter he looks up to is his 23-year-old brother Giacomo, a 21.05 200m runner.

Tortu ran his first race age four. His parents had taken his brother to a local race and while waiting around, his mother found out about the kids’ race. “She just decided to sign me up and I won.”

Tortu may not remember the race itself, but he does remember the award. “A toy,” he recalls. “It was a pink miniature motorcycle which I keep with all my medals.”

Tortu has had a breakthrough year in 2016, twice improving the national U20 record, most recently at the European Championships in Amsterdam where his 10.19 was just short of a spot in the final and 0.03 off the qualifying standard for Rio.

“Amsterdam was amazing,” he said. “It was such a fantastic experience. The fact that I set my personal best, the crowd, the atmosphere, the camaraderie with my team-mates. Everything was great.

“I’m very disappointed,” he added about the Olympic Games. “I really wanted to be there.” There is extra disappointment for Tortu as the Italian 4x100m is not among the 16 qualified teams and will also be absent in Rio.

So big is his disappointment about not going to Rio, he says he’s not going to even watch the athletics on TV. “Well maybe just the 100m and the 200m,” he quickly adds.

“I will be cheering for Adam Gemili; he’s my favourite.” Tortu knows all about Gemili. He knows Gemili won the world U20 title in 2012, he knows Gemili still holds the championship record of 10.05, and he knows Gemili is a ‘very nice person’.

“I met him in Amsterdam,” said Tortu. “He congratulated me on my PB. He also came up to me after the 4x100m and he wished me well. I really appreciated that.

“I don’t really like all the antics of some athletes before the start of a race. Adam is more discreet. I like that.”

Tortu currently lives in Costalambro, a village of 1500 inhabitants near Monza. He loves music, anything from classic to rock, and would love to play the drums but has little time on his hands. He trains five, sometimes six, days a week after high school. “I want to go to university but I don’t really know what I want to do when I’m older.”

He played basketball until the age of 13 when he was forced to stop due to recurrent injury problems with his heels. And just like every Italian teenager, he is a football fan – “Juve, of course” – and misses playing the game.

Tortu knows it would be too much of a risk on his frail teenage body. He has even stopped running the 200m until he builds up a stronger frame. “I love the 200m, the technique, the curve,” he says. “But I’m too thin for the event. The speed we have coming off the curve is so high.”

Tortu’s missed opportunity through injury in Nanjing two years ago draws parallels to Gianmarco Tamberi’s recent experience, with the Italian high jumper being forced to miss the Rio Olympics after hurting his ankle.

“I was devastated when I heard the news,” said Tortu, echoing the feelings of his nation. “I wrote to him to offer my support last week and he wrote back last night to congratulate me.

“He’s a top guy. He’s achieved amazing results on the track but it’s off the track that he’s really a top guy. We really needed him. I’m sure he’ll be back stronger and we’ll both be back for the next Olympics.”

BACK
Pages related to this articleAthletes
Filippo TORTU 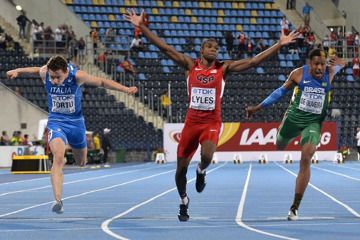