French athletes make a huge impact over more than a century

The French athletics federation – Fédération française d'athlétisme (FFA) – celebrates its 100th birthday this year but the achievements of French athletes span many decades more as the country was one of the first to embrace our sport in a fashion that we might currently recognise it.

During the early part of the 19th century, professional pedestrian races were held in France, often between the servants of noblemen for the purposes of betting, but the first recorded athletics meeting which would be recognisable today was held in St Servan, Brittany, in 1866.

France’s first known club, devoted purely to running, was formed in Paris in 1875 and the famous Racing Club de France, which had athletes of all disciplines among its number, came into being seven years later.

“The first (international) meeting in our territory was in 1886 at Croix-Catelan (in Paris) and included Belgians and the English as well as the French,” according to the FFA website. “The programme included: 100m, 400m, 1500m and 120m hurdles. We can consider that birth of (modern) athletics in France. Jumps and throws did not appear until 1892.”

The first French Championships took place in 1888 under the auspices of a multi-sport organisation which the following year became the Union des Sociétés Françaises de Sports Athlétiques (USFSA). This was to be the governing body of the sport in France – and the affiliated organisation to the International Amateur Athletic Federation upon its foundation in 1912 – until the inauguration of the FFA on 20 November 1920.

Of course, towering over the early history of athletics in France is the figure of Baron Pierre de Coubertin, the founder of the modern Olympic Games.

Not surprisingly, France was well represented at its very first edition in 1896 and has been ever since, one of only four countries to have athletes at every Olympic Games.

Alexandre Tuffere has the honour of being his country’s first Olympic medallist when he finished second in the very first event to be decided on the 1896 athletics programme, the triple jump. Although there were no French winners in Athens, four years later on home soil in Paris, Michel Theato was victorious in the marathon to become France’s first ever Olympic gold medallist.

French athletics successes in the global and continental stage have continued ever since.

Jean Bouin was an iconic figure in long distance runner who won medals at both the 1908 and 1912 Olympic Games and set three official world records before tragically being killed in the early months of World War I in September 1914.

The late 1920s and early 30s were also a halcyon period for French distance running with Boughera El Ouafi winning the 1928 Olympic Games marathon and Jules Ladoumegue, a 1500m silver medallist at the same Games in Amsterdam, setting world records over 1000m, the mile, 1500m and 2000m.

French women started to make a name for themselves internationally immediately after World War II and Micheline Ostermeyer took a shot and discus double at the 1948 Olympic Games.

However, the next global superstar for Les Bleus was Alain Mimoun, who had a series of memorable duels with the legendary Emil Zatopek before finally striking Olympic gold in the 1956 marathon.

Mimoun was also a formidable cross country runner and won the International Cross Country title – the forerunner to the World Cross Country Championships – on four occasions.

In 1999, the French magazine Athlétisme Magazine – holders of a World Athletics Heritage Plaque – voted Mimoun as the ‘French Athlete of the 20th Century’. 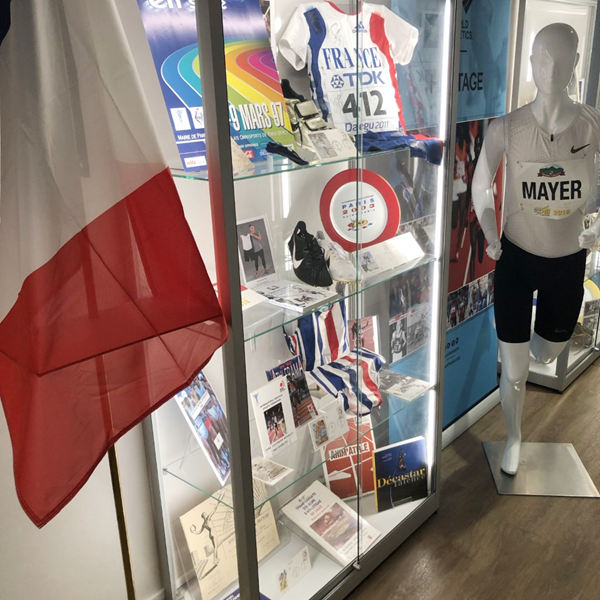 Turn the clock slightly forward to the 1960s and once again the spotlight was on a superlative runner in the form of Michel Jazy.

Jazy – who coincidentally had shared a room with Mimoun in Melbourne – came to international attention when he took the 1500m silver medal in a French record behind Herb Elliott in the Australian’s world record-setting winning run at the Rome 1960 Olympic Games.

He went on to win the 1500m and 5000m at the 1962 and 1966 European Championships respectively but also gained global fame for his races against the clock, setting nine world records over a variety of distances including a 3:53.6 mile in 1965.

Into the bargain, Jazy set an astonishing 49 national records between 1959 and 1966.

The 1970s saw the emergence of the charismatic hurdler Guy Drut, who won the European 110m title and set three world records the following year before also triumphing over the barriers at the Montreal 1976 Olympic Games.

France has historically also had its fair share of super-quick sprinters – think of former 100m world record-holder Roger Bambuck who ran 10.0 in 1968 and Jimmy Vicaut, the current co-holder of the European 100m record with 9.86 – and they showed their talent at the European Championships in 1990 when Max Moriniere, Daniel Sangouma Jean-Charles Trouabal and Bruno Marie-Rose combined to post a 4x100m world record of 37.79, the first time in almost 22 years that the standard was not in US possession.

In the 1990s, France produced many stellar female sprinters as well, notably three-time Olympic gold medallist Marie-Jose Perec and Christine Arron, whose winning time of 10.73 at the 1998 European Championships remains a continental record to this day.

In the 21st century, France’s most prolific world record setter has been race walker Yohann Diniz who set the current 50km world record of 3:32.33 when winning the 2014 European title, his third continental crown over the distance to which he would add a 20km world record the following year and a 2017 world title over the longer distance.

However, no brief history and celebration of French athletics success would be complete without a mention of their phenomenal tradition in the pole vault.

Fernand Gonder set the trend in motion with three world bests back in 1904 and 1905 followed by a victory at the 1906 Intercalated Games.

Yohann Diniz on his way to winning the 50km race walk

Thierry Vigneron set five world records in a frantic period between 1980 and 1984 while Philippe Houvion and Pierre Quinon also had one world record vault apiece during this period, the latter taking the gold medal at the 1984 Olympic Games.

Jean Galfione added another Olympic pole vault title to the French role of honour in 1996 while Renaud Lavillenie won the 2012 Olympic Games gold medal, three successive European outdoor titles between 2010 and 2014 and broke Sergey Bubka’s world record that had stood for 21 years when he cleared 6.16m indoors in February 2014, a prelude to him become the only French athlete ever to be voted as the World Athlete of the Year later in 2014.

BACK
Pages related to this articleAthletes
Guy Drut