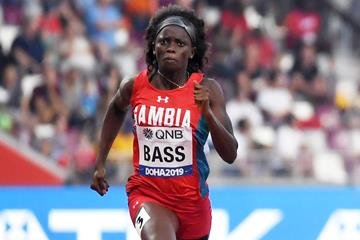 When Gambian sprinter Gina Bass finished sixth in the 200m at the World Championships last month, she didn’t take home a medal but an entire continent was proud of her.

Bass was also making headlines in her West African nation as the first Gambian athlete to have reached the final at a World Championships.

It was the close of a strong season for the sprinter, who also collected a victory at the African Games in Rabat, Morocco, and set three national records.

Born on 5 May 1995 in Toubacouta, an arrondisement in the Fatick Region of Senegal, Bass grew up with a sister and two brothers. Her athletics talent was noticed at an early age in school competitions.

“I started running when I was primary school when we used to do regional championships,” Bass said. “I continued to run in junior and senior school and that is where one of the coaches saw something in me and began encouraging me to the point where I am today.”

By 15, she had achieved the qualifying standards for the 2010 Youth Olympic Games in Singapore, but with participation only open to athletes born between 1 January 1993 and 31 December 1994, Bass was too young to compete.

“When they said I was too young, I was never discouraged. I still continued pushing harder.”

At the 2011 Commonwealth Youth Games in Douglas, Isle of Man, she didn’t advance to the 100m final after finishing fifth in her semi-final, but her 12.24 showing was her best performance that season. Two months earlier, in July, she competed at the World Youth Championships but didn’t make it out of the 100m heats.

Over the next four years, Bass transitioned into the senior category with little notice. She competed at the 2015 African Games, finishing 13th in both the 100m and 200m.

By this time, she was looking up to three women conquering the sprint world: Jamaica’s Shelly-Ann Fraser-Pryce and Ivorians Murielle Ahoure and Marie Josee Ta Lou.

She contested both the 100m and 200 at the 2016 African Championships in Durban, but when she failed to reach the final in the shorter dash, it appeared that she would leave the competition empty-handed. But three days after her exit from the 100m semi-finals, she won her first medal for The Gambia at a major international competition.

Bass clocked a 22.92 national record to take 200m bronze, finishing 0.11 behind the winner Ta Lou, one of her role models. It also marked the first time The Gambia had won a medal at the African Championships.

“It was exciting,” Bass said. “I was really happy about it and thankful to God.”

That performance opened doors. Thanks to a scholarship from the Gambian Olympic and Sports Committee, Bass began to train at the IAAF High Performance Centre in Dakar alongside Ta Lou.

Later that summer, at 21, she became the first woman athlete from The Gambia to qualify for the Olympic Games. In Rio she was fifth in her 200m heat.

She began 2017 with 100m gold and 200m silver at the Islamic Solidarity Games in Baku. She broke the national 100m record with an 11.36 performance in late June and clocked a 22.98 season’s best to punch her ticket to the World Championships. But again, she didn’t advance from the opening round.

More international experience followed in 2018. She reached the semis in both the 100m and 200m at the Commonwealth Games in April and at August’s African Championships finished eighth in the 100m and fourth in the 200m. In the latter she missed bronze by just 0.02 behind Ghana’s Janet Amponsah.

In 2019, Alain Smail began coaching Bass in Dakar. By the time the African Games came around in August, she was on the verge of making national history.

“I enjoyed running against (Ta Lou) and it was my dream to beat my role model,” Bass said, “but I still don’t run her time.”

Her performance in Rabat also qualified her for the World Championships in both sprints, another first for her country. She reached the 100m semis where she clocked 11.24, a warm-up for her appearance in the 200m. She competed well through the rounds en route to her sixth place showing in the final where she clocked 22.71.

“I am happy with my performance but it was really hard because my body was tired after a long season,” she said. “I hope I can rest and prepare for next season and for Tokyo 2020.”

Bass remains grateful for the love and support she has received from Gambians who consider her a hero. She also has words of encouragement for other young athletes who now look up to her as a role model.

“It is not easy, it is all about training,” she said. “If you believe in yourself, never be discouraged.”

Meanwhile, she is also looking further than the next Olympic Games and her ambitions remain high.

“My plans for the future are to continue my education. Also, I want to break the world record for 200m.”