“Hurdlers are sprinters with attitudes,” says Grant Holloway. “Our event is sexier than just a regular fast sprint because we have barriers in our way.”

The world champion has certainly brought excitement to the sprint hurdles in recent years. His freakish all-round ability combined with his potential to dominate his event has created a buzz around Holloway usually only reserved for athletes who go on to become superstars of the sport.

Holloway possesses the foot speed to become a major contender in the flat sprints. In his first ever 60m competition, for example, he ran 6.51 and then reduced that time a few weeks later to 6.50 to win the 2019 NCAA indoor title. And that came just 40 minutes after winning his third successive NCAA indoor crown in the 60m hurdles, equalling the North American record of 7.35.

He has also clocked 20.66 for 200m (and 20.69 for the distance indoors), and produced several sub-44-second splits in 4x400m relays during his time at the University of Florida.

But Holloway is sticking with the hurdles. “I just love hurdling,” he says. “I’m a fantastic sprinter, but I just enjoy hurdling more.”

Before and after most of his races this year, Holloway has spoken a lot about race execution and momentum.

With those two principles as his main focus, Holloway has pieced together one of the greatest indoor campaigns ever for the 60m hurdles, capped by his world indoor record of 7.29 (pending ratification) at the World Athletics Indoor Tour Gold meeting in Madrid. Including heats, he has won all 10 of his races in 2021, extending an indoor sprint hurdles winning streak that now spans six years.

He has bettered 7.40 in seven races this year – a record for one season – while his lifetime tally of sub-7.40 performances now stands at nine, equalling Colin Jackson’s record figure. Holloway’s ‘slowest’ winning time in a final this year, 7.41, is a time that no one else in the world has bettered. Indeed, just one other athlete has broken 7.50 in 2021. His average winning margin, meanwhile, is 0.23 – almost a quarter of a second.

“I’m not really surprised (with my form),” said Holloway. “I’ve been working for it; it was just a matter of executing and doing what I do best. It’s all about momentum. I’m staying consistent in the 7.3s and that’s the goal for this season. I had two races in the 7.4s, but the majority of my races were in the 7.3s. My coach and I said why not break the norm of running 7.5s and 7.6s; we should come out and run 7.3s. 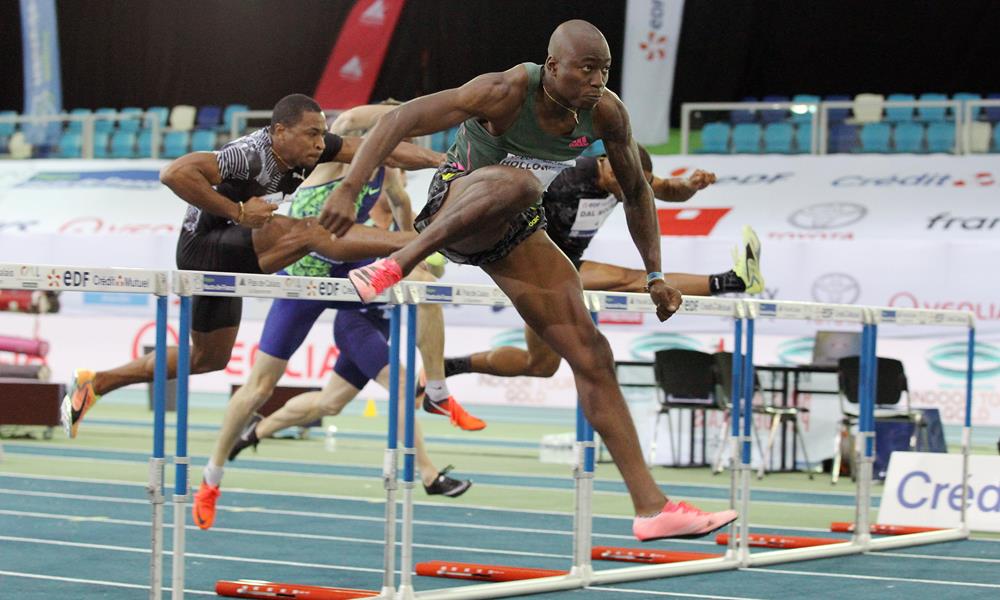 “No race is perfect; there’s always something you can do better. But if you stay consistent, you’ll have a breakthrough sooner or later."

Jackson, the former world record-holder, had been keeping a close eye on Holloway's races this year and he was pleased to see the long-standard mark of 7.30 finally go.

"As a fan of athletics, it was great to see Grant break the indoor record," said Jackson. "He’s been so close on a few occasions, so it was only going to be a matter of time. I’m always excited to see history being made. Congratulation Grant, keep improving and go sub 7.25!"

Holloway looks up to Jackson and considers the Briton to be one of his idols. But further improvements on the world indoor record will have to wait until next year; Holloway is already thinking about the outdoor season.

“Now I need to take all that energy and translate it to the outdoor season, keeping the momentum going,” said Holloway. “If you get the first five hurdles right, then most likely you’re going to have some great momentum going into hurdles seven, eight and nine.”

There’s the ‘momentum’ word again. And if Holloway does indeed carry this form through to the outdoor season, the focus will inevitably fall on the 110m hurdles world record of 12.80 set by USA’s Aries Merritt in 2012.

Holloway takes it all in his stride, though.

“The sky is the limit,” he says. “I try not to put a number on my goals. Whatever happens happens. The goal, as always, is just to come out, win and execute at a high level.”

He did exactly that in Madrid. One week before his record-breaking run in the Spanish capital, he described what his perfect race would look like.

“The gun goes off and I’m the first one out of the blocks,” he said, running through the race in his mind. “I go through hurdle one with some amazing speed, go over hurdles two, three, four, then I get to five and cross the line and something under 7.30 pops up.”

That’s almost exactly what happened in the Centro Municipal Deportivo Gallur arena – apart from the display on the clock, which took a minute or so to display the correct adjusted time, 7.29.

And if his social media posts were anything to go by, Holloway had a feeling he was set to produce something special on Wednesday evening. On his Instagram page earlier that day, he shared a video with a backing track produced by US triple jumper Will Claye, entitled ‘Dreams Don’t Die’.

Holloway came of age in 2019, capping his season by taking 110m hurdles gold at the World Athletics Championships in Doha in what was his 50th competitive appearance of the season.

During a busy indoor campaign at the start of the year, he won the 60m flat and 60m hurdles and took bronze in the long jump at the NCAA Indoor Championships. He then had just a two-week break before opening his outdoor season at the end of March.

His collegiate career ended on a high at the outdoor NCAA Championships where he won three medals in the space of two-and-a-half hours, winning the 4x100m in a collegiate record of 37.97, then taking the 110m hurdles title in a PB of 12.98, another collegiate record, before producing a 43.75 anchor leg to elevate the University of Florida from fourth to second in the 4x400m. 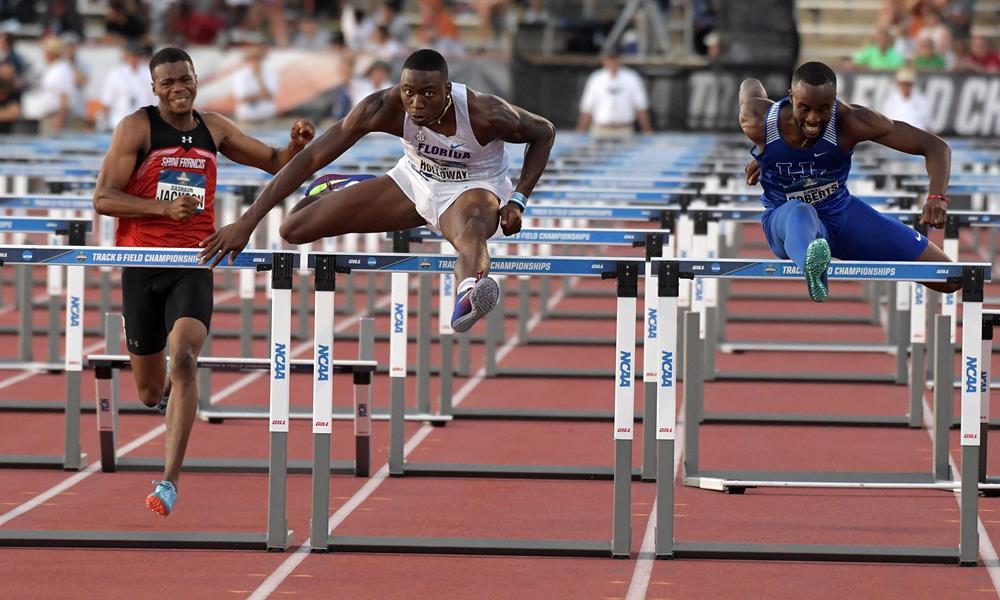 He turned professional soon after, won his first race on the international circuit, secured his spot on the US team for the World Championships, and then went on to secure gold on Doha.

But 2020 wasn’t exactly how Holloway envisaged his first 12 months as the reigning world champion in his event.

“2020 was definitely a growth year, not just for me but for everybody,” he said. “I think it’s what we needed, and now we can start to rebuild and get back to normal.

“I wish fans were at meetings because that would really help get the adrenalin going, but we’re just trying to get back to normality. No one really had meets in 2020, so it’s all about having fun right now. I want to continue to add to my resume, continue to stay focused, and continue to stay consistent.

“I’m healthy and I’m happy – physically, mentally and emotionally. My skin even looks clear, and I’m very happy about that. I’m just having fun. Getting away from the United States for a whole month is hard right now, so I’m going to cherish every moment.

“Don’t get me wrong – I want to win all of my meets, but if I happen to lose (a meeting on the circuit) but I still get to win the Olympic gold medal, then I’ll be happy.” 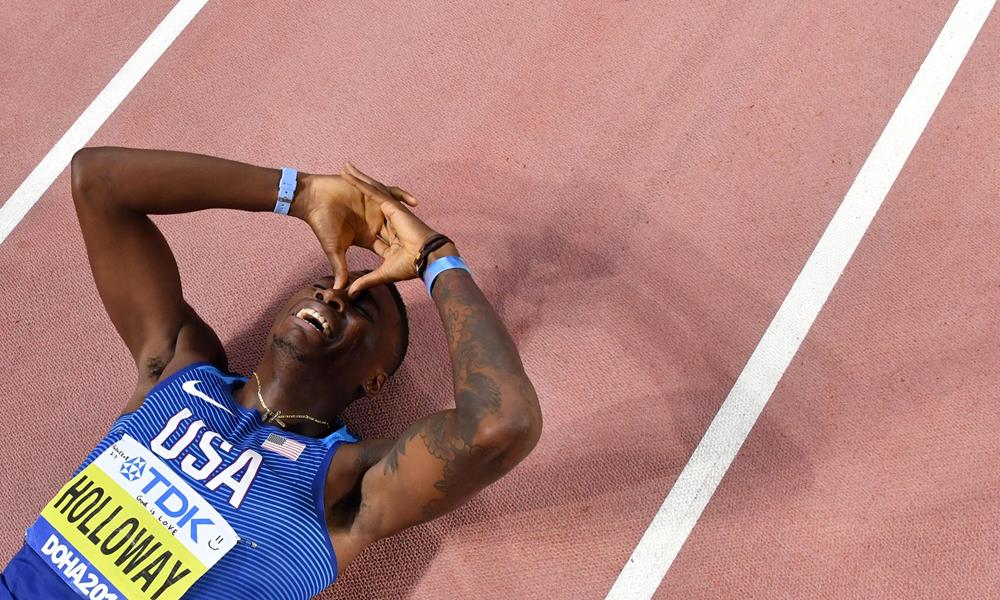 Holloway may be one of the younger elite sprint hurdlers – he was the youngest in the 2019 World Championships final by three years – but he is already thinking of ways he can inspire up-and-coming athletes.

“I’m trying to be a vessel for the next generation,” he says. “The generation coming up will be looking up to us, so we have to show them the right track and the dos and the don’ts. The stuff that I learned at a young age, I can definitely use now.

“When I first started track and field and I first started hurdling, I didn’t have anything, but now I have a lot. I sacrificed everything I had to do track. I gave up football, I turned down certain offers from different universities. I now have everything I dreamed of and ever wanted and I’m going to work a million times harder to make sure I can keep it all.

“I’m 23 years old, I feel like I’m in the best shape of my life,” he added. “We’ll celebrate for a little bit and soak it all in, but the past is going to be the past.

“My name is going to be etched in the record books forever, but the main goal is to continue to have fun.”