On a night when there were five world-leading performances at the IAAF Diamond League meeting in Lausanne on Thursday, you could be forgiven for slightly overlooking the second place in the women’s 400m hurdles of emerging local Swiss talent Lea Sprunger.

Nevertheless, at 27 something of a late comer to the very top echelon of the sport, Sprunger’s run and personal best of 54.29 consolidated her position as somebody to be very much aware of with the IAAF World Championships London 2017 now less than a month away.

She is now the leading European on this season’s world lists, with five Americans and two Jamaicans faster than her, but her outing at the Athletissima meeting gave every suggestion that there is still plenty more to come.

Against a loaded field containing all three Rio 2016 Olympic Games medallists and the winner of the last two world titles, but spurred on by a near-ecstatic home crowd, she flew over the first five hurdles and was in the lead at the halfway point.

Despite seeming to tire around the second bend, she got her second wind off the eighth barrier and went from sixth to second down the home straight, only losing out the USA’s Rio bronze medallist Ashley Spencer and leaving in her wake a whole host of hurdlers with better championship credentials than the European bronze she acquired last summer in Amsterdam.

Filling the three places immediately behind Sprunger were Great Britain’s 2014 European champion Eilidh Child, Denmark’s Rio silver medallist Sara Slott Petersen and Czech Republic’s two-time reigning world champion Zuzana Hejnová; while it all went wrong on the night for Rio gold medallist and the 2017 fastest woman in the world Dalilah Muhammad, who pulled up between the first and second hurdles.

“The public helped me a lot to fight all along this race. It (Lausanne) is definitely not just any other meeting, it’s as important as a final (at a major championships). Knowing that in the crowd was my family and my friends, these details make a difference.”

“The national record is very close (held by Anita Protti with 54.25 when she finished sixth at the 1991 world championships) and is definitely an objective,” reflected Sprunger after the race.

“Most importantly, I want to keep improving and to get to London in the best shape possible. I need to be even more relaxed and fluid over the hurdles and I should get to the record.

“I started fast (in Lausanne), which was good, but then I was a bit too passive on the second bend and that is probably where I lost those four hundredths-of-a-second.

“I have made a huge change, at least for me, and gone from 15 to 14 strides, but I really needed it. I feel good with this new rhythm even if I haven’t practiced it in a lot of competitions so far. From now on, hurdles don’t scare me anymore!”

“Changing my strides was decided at the end of last season. This rhythm is better for me considering my pace. However, I am still in the phase of fine-tuning my strides.”

As part of a momentous week for Sprunger, she set a Swiss 400m record of 51.09 at nearby La Chaux-de-Fonds on Saturday.

“Yes, I had an amazing season so far. One of my goals this season was to break the Swiss 400m record. I’m delighted I did it a few days ago.

“My goal is to have my name on as many Swiss records as possible (she also holds the Swiss 200m record).  I think I am to run under 54 seconds (for the 400m hurdles). I am sure I can make it but I don’t’ know if it will be this year or next season.”

Foundation in the combined events

Sprunger first came to attention as a heptathlete and was 10th at the 2008 World U18 Championships before progressing to the podium the following year and taking the bronze at the European U20 Championships.

However, her last heptathlon came six years ago after relatively weak throwing events suggested to her that her path to the top lay elsewhere.

A disappointing 16th place at the 2011 European U23 Championships, her last heptathlon, was a pivotal point in convincing her to switch to the 200m and in 2012 she achieved her ambition of making the Swiss teams at that year’s European Championships and the London 2012 Olympic Games.

However, major success still eluded her and she extended her range to 400m in 2014 and the 400m hurdles the following year in a bid to find her niche.

She jokingly denied that Kariem Hussein’s 2014 European win on home soil in Zurcih influenced her decision to change to hurdling shortly afterwards.

“Kariem’s win was great for Swiss athletics but I’d actually decided to make the switch before those championships,” she added, watching Hussein’s triumph from the stands as she also contested the 200m there.

Now the race is on to emulate Hussein’s victory.

“If I stay healthy and keep improving like I have done this year, then I think I can do better than my bronze medal from last year in Amsterdam,” added Sprunger with a steely and determined smile.

BACK
Pages related to this articleAthletes
Lea SPRUNGER 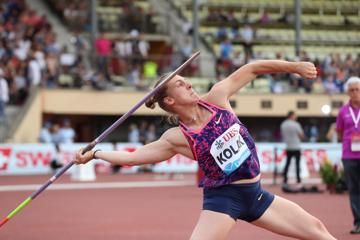 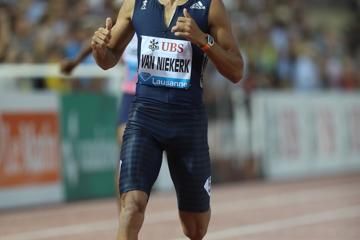