With two Olympic Games and two World Championships decathlon medals to his name, Leonel Suarez wants to continue achieving great things as he prepares for his third Olympic Games in Rio.

The 29-year-old Cuban confirmed he could potentially be in the running for a third consecutive Olympic medal after scoring a world-leading 8347 at last month’s National Championships in Havana, his best score since getting the bronze medal at the London 2012 Olympic Games.

“I was aiming at the Olympic standard (8100 points) and was surprised by the score,” said Suarez from his training camp in Monterrey, Mexico, where he will have a one-month stint until the end of April. "I can now focus on trying to improve my speed and technique to fight for a medal in Rio.

“I felt some pain in my right knee during the high jump (at the Olympic Games in London) and I thought it was a bad step. The following year it got worse and I barely managed 1.90m at the World Championships in Moscow. I tried several treatments to avoid surgery, but they did not work and so I opted for an operation in August 2014,” said Suarez, who had previously undergone surgery on his right meniscus in 2007.

His comeback has not been easy in the past 18 months. “I spent two months with a cast and progressively started to do swimming, cycling and running in the water as part of my rehabilitation. I started training in earnest in January 2015, but it was not easy after being away from the sport for over a year."

He scored 8027 in his season’s debut at the Barrientos Memorial meeting in Havana but failed to complete his two other decathlons in 2015, including the Pan American Games in Toronto, where he was the defending champion having had his one major interenational title at the previous edition in 2011.

“The right leg is my take-off leg for both the high and long jumps," he added. "I could not complete 75% of my training in 2015, due mostly to my long absence from training, so I could not ask for more. I doubted sometimes if I would be able be back among the world’s best, especially judging how my runs went last year, but certain training days showed me I could regain my form again."

With the Olympic standard in mind, Suarez resumed full training on his 29th birthday on 1 September last year. “I have had a great preparation so far and the results (at the National Championships) showed I am on the right track.”

His 8347 total in Havana included a personal best of 78.29m in the javelin, his strongest individual event, an effort which is just shy of the best ever in a decathlon which stands at 79.80m to Germany’s Peter Blank.

“I am happy overall with the result, especially the high jump (2.06m)," he said. "I know I can jump higher in a more demanding competition. I am also happy with my discus, but I need to work harder to ensure I can throw what I have been doing in training."

Reflecting on his performance at the Cuban Championships, his coach Gavino Arzola stated that the aim was for a total in the 8200-8250 range but the javelin came as a surprise.

“Many things did not come out as expected," said Arzola. "We both put a lot of pressure on ourselves as to whether he could really be a serious contender again.”

With the pressure off his shoulders after having met the standard for Rio, Suarez can enter this final stage of his preparation for Rio with renewed confidence. “I can now focus on the Olympics and test my form in Gotzis against some of the old and new names that have emerged in the past two years.”

Suarez is currently completing a short general conditioning phase in Monterrey, which will be followed by specific workouts to improve his speed and long jump. “These are key elements to stay closer to the leaders on day one.”

Arzola has set the plan on reducing the gap on day one by improving his jumps and sprinting, trying to get close to his personal bests. “Day two is equally crucial and we will continue to try to do better in the javelin; it’s his lethal weapon”.

Suarez has good memories of the famed combined events meeting in Gotzis. He broke the Cuban record when he finished fourth with 8366 in 2008, and went on to take the Olympic bronze in Beijing, but he has yet to win in the Austrian town.

Depending on the result in Gotzis, he may decide to do one further decathlon before the Games.

“She is now starting to understand what daddy does and I love to see her watch me compete or train," said Suarez. "She is an extra boost to all my efforts to be the best athlete I can be.”

He aims to become the first decathlete to win three consecutive Olympic medals. “My aim is to reach the podium again. It will be harder than 2008 and 2012 with (Ashton) Eaton and (Damian) Warner, but that’s what I am training for and I will continue to work hard to achieve great things in athletics.”

BACK
Pages related to this articleAthletes
Leonel Suarez 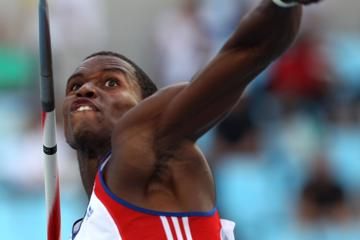