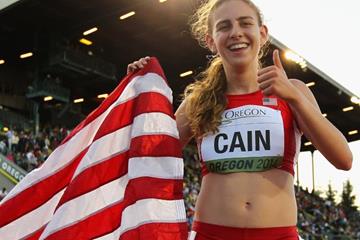 Crowd control collapses as Cain beats her rivals into submission

In front of a crowd numbering, according to the organisers, just over 8000, Mary Cain won the first medal of any colour for a US woman in a distance longer than 800m in IAAF World Junior Championships history when she won the 3000m on Thursday evening (24).

The announcer noted, correctly, that the crowd sounded much louder than that as Cain disentangled herself from the leading knot which included two Kenyan rivals and sailed home to victory in 8:58.48.

The decibels rose and the rafters of the two wooden stands of Hayward Field were metaphorically, and almost literally, raised.

Coached by the same man, Alberto Salazar, who designed the double Olympic victory of Mo Farah and the stellar career of Olympic 10,000m silver medallist Galen Rupp, the 2013 IAAF Rising Star of the Year raced in Eugene with the same confident tactics.

The strategy which brought her victory closely matched those usually ascribed to her African opponents: don’t lead, stay in contact, and attack at the end with overwhelming speed.

With her middle-distance background – Cain has competed for senior national titles at 800m and 1500m – the speed was available.

What allowed Cain’s strategy to work was her ability to stay in contact.

“I was mentally and physically prepared for that,” Cain told reporters. “I knew there'd be some surges in there. There were some that felt like 800m pace. With that being said, if it was going to go 8:40 I was going to go with them.” (The US junior record is 8:57.27, which has stood to Ceci Hopp from 1982, and is just a bit more than a second faster than Cain’s winning time.)

Cain’s winning margin of 2.05 over Kenya’s Lilian Kasait Rengeruk of Kenya was one of the wider margins in recent history. It was Cain’s fastest 3000m yet, in contrast to Rengeruk, whose 8:53.41 from the IAAF Diamond League meeting in Doha made her the fastest woman on the starting line.

Rengeruk, however, had benefited from a fast early pace set by others in Doha, whereas in Eugene she had to make the pace herself for much of the race.

Cain has focused on the 800m and 1500m for most of her career, and has little history at 3000m. However, her tactics in Eugene suggest she’s capable of running significantly faster should the competition call for it.

The sources of Cain’s confidence are a little more challenging to tease out. She ascribes part of it to Salazar, saying: “He really is the best coach in the world, in terms of all the stuff he makes me do. Every race I go in thinking I can win.”

Another part comes from international experience at a level few other competitors here share.

As a finalist in the 1500m at the IAAF World Championships in Moscow last year, Cain has already built the kind of competitive history her rivals are here to gain. Other junior athletes sharing the Moscow experience have done well here, notably Anezka Drahotova’s world junior record (subject to ratification) in the 10,000m walk.

After a short rest, she is expected to cross the Atlantic and be on the starting line in a couple of the IAAF Diamond League meetings in Europe next month. The distances have not been announced but don’t be surprised if she tries to reduce the long-standing US 3000m junior record that she went so close to in Eugene.

Cain, who recently graduated from high school in Westchester County, New York state, will start at the University of Portland in the autumn, two hours’ drive north of Eugene.

Her frequent competitions in Eugene in recent years have led the Hayward Field fans to claim her as one of their own. Cain hoped, in a pre-meeting press conference, that this would give her an edge.

Whether that or the sheer drama of the race drove the crowd’s roar as she sprinted for home, she drew motivation from it. “There was nowhere else that they would have been that loud for me,” she told reporters.

After victory on the track, too, Cain conquered the mixed zone, greeting a small huddle of reporters with the sort of wide-eyed enthusiasm and giddy, uncrushable smile she might have for her best friends.

Whatever her professional experience and fearless race tactics might suggest, Cain in person still projects a friendly, kid-at-play personality. And although she has a long way to go in matching his professional accomplishments, that’s something she shares with a much better-known athletics figure: Usain Bolt.