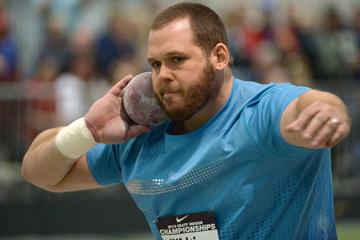 Whiting and Cain put in dominant performances at US Indoors

After opening with a modest 19.90m, Whiting then sent his shot out to 21.33m in round two. But that lead was short-lived as Kurt Roberts smashed his lifetime best in the third round with a world-leading 21.50m.

It didn’t last long at the top of the 2014 world indoor season list, though. In the penultimate round, Whiting uncorked an indoor lifetime best of 22.23m to secure the title. It is the sixth-best indoor performance in history and puts him at fifth on the world indoor all-time performers list.

“I’m stronger than I was last year. Mentally I’m a lot more ready,” said Whiting after producing the best indoor shot put mark for six years. “Going into Sopot as the favourite, I’m a lot more ready for it this year. There’s no reason for me to be timid.”

In third, Joe Kovacs also surpassed the pre-competition world-leading mark with his outright PB of 21.46m, but finished just four centimetres shy of making the team for the World Indoors.

In the women’s 1500m, the pace was much faster than a year ago at the USA Indoor Championships, but the result was the same for Mary Cain. The 17-year-old successfully defended her indoor title in resounding fashion.

Cain controlled the race over the final 600 meters and won in a convincing 4:07.05. The race was vastly different from last year’s slow, tactical mile which Cain won in 5:05.68.

“I’m really happy it was a fast pace because it really gives you confidence for this World Indoor Championships,” Cain said.

Cain’s training partner Treniere Moser finished second in 4:09.93 and will join her in Sopot.

Mary Saxer upset defending champing and world indoor record-holder Jenn Suhr in the pole vault. Saxer cleared 4.71m on her first attempt, an outright personal best by one centimetre. Suhr, who was experimenting with lighter poles, missed on her first attempt at 4.71m and then passed her final two opportunities.

It was the first time since 2006 that Suhr has been beaten at the US Indoor Championships, ending her seven-year reign as the national indoor champion. Despite the loss, Suhr is confident of her chances for gold in Sopot.

“If things keep going like they have been in training, it’ll be good but there’s a lot of good girls out there,” she said.

There was another surprise in the triple jump as Chris Carter flew out to a lifetime best of 17.15m, 29cm farther than his outdoor PB and second in the world this year, to win his first national title by a comfortable margin.

Nia Ali took a huge chunk off the world lead that she set on Saturday in the women’s 60m hurdles. Ali ran 7.80 seconds, just .02 seconds ahead of Olympic long jump silver medallist Janay DeLoach Soukup. With their big PBs, the pair now go to fifth and seventh respectively on the US indoor all-time list.

The margins were even slimmer in the men’s 60m hurdles, where just six thousandths of a second separated the top three places as all were credited with a time of 7.56. Ultimately, Omo Osaghae was awarded the win with a time of 7.553. Dominic Berger finished second in 7.556 and Terrence Trammell was timed at 7.559, narrowly missing out on qualifying for the World Indoor Championships.

In the women’s 400m, Francena McCorory was in last place with 150 meters remaining before chasing down Joanna Atkins and Natasha Hastings. The world and Olympic finalist won in a world-leading 50.85, her second-fastest indoor performance behind her own US indoor record of 50.54. Atkins held on for second in 51.13.

The two heat set-up made for a quirky final in the men’s 400m. Kyle Clemons won what was expected to be the faster of the two heats in 45.60. In the slower section, David Verburg clocked 45.62 to claim his spot on the World Indoor Championship team. In all, four of the top six times in the finals came out of the “B” heat.

Marvin Bracy ran his winning streak to three in the men’s 60m. The 20-year-old ran a personal best of 6.48 just ahead of Trell Kimmons, who finished in 6.49. After earning the biggest win of his young career and following the injury of world leader James Dasaolu, Bracy enters the World Indoor Championships as one of the favourites.

In the women’s 60m, Tianna Bartoletta ran 7.08 to edge Lekeisha Lawson in an extremely close finish. The first four places in the race were separated by a mere .03 seconds.

The race for the top two spots was decided much earlier in the women’s 800m, but the race still provided some drama.

Chanelle Price led from the gun and appeared to be in command before world junior champion Ajee Wilson closed the gap in the home straight. Wilson snuck by Price in the final meters to get the win in 2:00.43, the fastest ever indoor performance by a US teenager. Price was close behind in 2:00.48.

In the men’s 1500m, Lopez Lomong and Will Leer survived a large and deep field to advance to the World Indoor Championships.

Olympic silver medallist Leo Manzano led for the majority of the race before a group including Lomong, Leer, Garrett Heath and Ryan Hill began to break away. Lomong held his lead over the final 200 meters and went on to win in 3:43.09.

Leer couldn’t quite repeat the magic from last Saturday’s Millrose Games mile, but was still able to use his patented late-race kick to pass Heath in the final 50 meters and finish in 3:43.21.

“What can I say? Millrose was a mile. That’s 110 more meters I had to work with,” said Leer. “I’m a little bit disappointed with the way that I ran today. I’m definitely happy to punch my ticket to Poland. I seem to be ok at this indoors thing, I’ve just got to figure out outdoors now.”

Erik Sowinski moved to the front with one lap remaining in the men’s 800m and did not relinquish his lead on the way to his second straight US indoor title.

“With 300 to go, I still felt good. I put it down really well,” said Sowinski, who finished in a time of 1:47.86. “I was kind of worried about running two days at altitude, but I did really well. I haven’t worn a USA uniform before, so it will be the first time. I’m really excited.”

Robby Andrews and Nick Symmonds fought to the line for the second spot with Andrews edging the world silver medallist 1:48.44 to 1:48.48. Despite the result, Andrews does not have the qualifying time so Symmonds will join Sowinski in Poland.

“I just had to survive today so I could get over to Sopot,” said Symmonds who was dealing with an illness this weekend. “I’m stoked to have punched my ticket. My heart goes out to Robby Andrews, who should probably be going.”