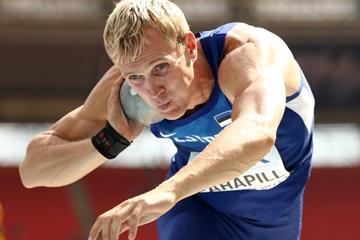 Anything is possible for Pahapill

His winning mark in Talence last month may not have been one of his highest scores to date, but Mikk Pahapill didn’t mind. He was simply happy to get through the decathlon in one piece.

In his previous decathlon three months prior, he picked up an ankle injury which ultimately meant that he had to forfeit competing at the European Championships in Zurich, where he hoped to improve on his fourth-place finish from four years ago.

Instead he had to stay at home in Estonia and watch the action unfold on TV.

Determined to end the year on a high, the Decastar meeting in the French village of Talence gave the 31-year-old the opportunity to do exactly that.

He bagged valuable points in the high jump on the first day after leaping 2.11m, his best outdoor clearance since 2008. But even then he still trailed the leader, Oleksiy Kasyanov, by 174 points going into the second day.

That gap grew by another 41 points after the 110m hurdles, but then Pahapill began to claw it back. He produced the best mark of the competition in the discus, and then out-performed his Ukrainian rival once again in the javelin.

With one event to go, Pahapill was in the lead. In the 1500m he finished close enough to Kasyanov to hold on to pole position, scoring 8077 to secure his first decathlon victory since 2008. In the process, he beat three of the top-10 finishers from the European Championships.

“At first the ankle injury I picked up in Kladno didn’t seem too serious, but it took a long time to heal and I didn’t want to compete at the European Championships if I wasn’t in good shape, so I had to skip it,” said Pahapill.

“I was kind of surprised with the performance in Talence because I thought the amount of training I did before the competition wasn’t enough. But in the end I had trained well throughout the rest of the year and I think it paid off.

“I was more focused on my own series, because I just wanted a good result. But before the 1500m you always look at the standings and at that point I knew I had a chance to win. In the end it was just amazing.”

Progress stalled by fall in Istanbul

It wasn’t the first time Pahapill had overcome an injury.

At the 2012 IAAF World Indoor Championships in Istanbul, Pahapill fell in the 60m hurdles and landed awkwardly on his shoulder, which put him out of action for a whole year.

“The decathlon is very demanding and it takes time to progress,” said Pahapill. “I was setting personal bests every year between 2008 and 2011, but then at the World Indoors in 2012 I fell due to a faulty hurdle. I had two operations and lost the opportunity to compete at the London Olympics. The injury was so serious, I had to question whether it was the end of my career.

“But after more than a year of hard work I was competing again and was able to compete at the World Championships in Moscow.”

In the Russian capital last year Pahapill finished 17th in the highest-quality decathlon competition of all time. His score of 8170 was the best he had managed in his four appearances at the World Championships, yet it was still more than 200 points shy of the 8398 PB he set in 2011.

But Pahapill believes that his best days are yet to come.

Pahapill’s father, Erni, was also a decathlete with a PB of 7388. “He was my first motivator,” said Pahapill of his introduction to athletes. “He had a real passion for the combined events and he taught me a lot.”

When Pahapill represented Estonia at the 2002 IAAF World Junior Championships in Kingston, it was clear that he was destined to follow in his father’s footsteps and one day go beyond what Pahapill senior had achieved.

At the 2005 European Cup Combined Events, Pahapill – aged just 21 – made his first big breakthrough. He won the decathlon and added more than 900 points to his PB, smashing through the 8000-point barrier in the process with his winning mark of 8149.

In the process, he qualified for that year’s World Championships in Helsinki, where he finished 12th. He finished one place higher at the Olympic Games three years later, improving on his PB with 8178.

But his biggest breakthrough was yet to come.

Still a relative unknown on the international scene, Pahapill instantly became one of the standout performers of the 2009 European Indoor Championships when he won the heptathlon title with a score of 6362.

He had never before scored higher than 6000 points, but after setting indoor PBs in every event in Turin – including a 7.97m long jump which, at the time, was the best mark ever achieved in an indoor combined events competition – he ended the weekend at ninth place on the world indoor all-time list.

The summer of 2009 didn’t quite go to plan, though. He no-heighted in the pole vault in his first decathlon of the year, and then recorded three fouls in the decathlon long jump at the World Championships in Berlin.

Just as he did this year, he gained redemption in Talence at the end of the summer, scoring a PB of 8255.

He added 43 points to that mark at the 2010 European Championships, just missing out on a medal by 72 points. Then in 2011 he improved again to 8398 when finishing third in Gotzis, beaten only by two of the men who went on to win medals at that year’s World Championships.

Unfortunately for Pahapill, he was unable to replicate that kind of form in Daegu and he finished in ninth place. But he dreams of a decathlon when he is able to repeat what he achieved in Turin in 2009 by setting PBs in every event.

“My ultimate goal is to put all of my best results together,” he said. “That would give me a big score.” 8900 to be exact.

“I have been working with Remigija for almost eight years now and she continues to help me progress as much as I can,” said Pahapill. “She is very passionate about the sport and has a lot of knowledge. She has helped me to overcome struggles which at times seemed impossible.”

So when asked if he could follow in his coach’s footsteps by winning a medal at next year’s IAAF World Championships in Beijing, Pahapill – as he now knows only too well, having reached the highs and lows of the sport – simply said: “Anything is possible.”