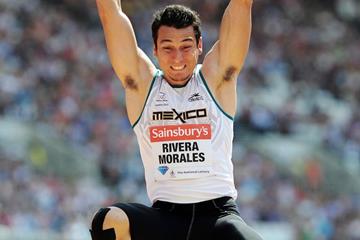 Rivera is jumping to achieve his dream

“If a dream crosses your mind, it will cross your life,” is one of Luis Rivera’s favourite quotes. But to the Mexican long jumper they are more than just words; it’s how he has lived his life.

More than 10 years ago, Rivera had a dream to become the best jumper in Mexico. He achieved it by winning the national Long Jump title seven times and the Triple Jump title twice. His next dream was to make an Olympic team, which he did last year at the London 2012 Olympic Games where he finished 16th in qualification.

This season Rivera’s dream has been to become the best jumper in the world. With an 8.46m leap – the best mark in the world for two years – he is the current world leader in the event.

“I believe that if you have a dream, it will happen in your life,” said Rivera. “You just need to believe in yourself, have a plan to make that dream come true, have discipline and never lose sight of your dream.”

In Moscow, the 26-year-old will be competing at his first World Championships.

“There’s no better way to experience your first World Championships than as the best on the planet in your event,” he said. “Being the best jumper in the world this year is very nice, and if I’m honest it won’t feel like it’s my first World Champs; I feel like if I’ve been there before, because I’ve dreamt it”, shared Rivera, who’s conferred a doctor's degree on Industrial Engineer.

“Athletics is not just about statistics or numbers,” added Rivera, who has a doctor’s degree in industrial engineering. “I know there will be the world’s best jumpers at the World Championships; we all deserve to compete at Moscow 2013. I know it will be a wonderful competition, but it won’t be easy.”

Rivera is the first Mexican long jumper to attract attention from around the world. At last month’s World University Games in Kazan, the favourite to win was local athlete Aleksandr Menkov, Russia’s Olympic finalist. But Rivera’s 8.46m proved too good for his opponents as he took gold and broke the championship record that had stood to Cuba’s four-time World champion Ivan Pedroso since 1997.

For the second time in less than a month, Rivera broke the Mexican record, having first done so in June in Szczecin, Poland, with 8.30m.

“When I jumped that 8.46m, I wasn’t thinking about the first place of the world ranking, I was just thinking about improving. From the moment I arrived in Russia I felt very confident, and since then we’ve made some technical changes.”

Rivera is the third long jumper from Mexico to qualify for a senior World Championships, following Carlos Casar in 1987 and former national record-holder Rogelio Saenz in 1993 and 1995. But he now has the potential to create an important chapter in Mexican athletics history as he goes to the 2013 World Championships as a genuine medal contender in the event.

Star performer in family of athletes

During this season Rivera has broken eight metres on seven occasions, five of which were winning performances. Aside from his jumps in Kazan and Szczecin, Rivera also triumphed at the Mexican Championships with 8.17m as well as winning at the Mt SAC Relays in California and the Josef Odloziz Memorial in Prague.

“This has been an amazing year, full of good results,” said Rivera, who is coached by former triple jumper Francisco Javier Olivares. “It has come as a surprise to me – it’s all down to discipline, effort and belief.

“The 8.46m jump is the best jump of my life – until now. It was very good, but I know there are some details I can improve.”

Rivera won’t be alone at Moscow 2013 as his brother Edgar will be competing at his second World Championships in the High Jump. The pair are the oldest of the four brothers in their family, all of whom are athletes. Jorge recently won silver in the Decathlon at the Central American and Caribbean Championships, while youngest brother Adrian, 19, is the national junior Long Jump champion.

“They are an inspiration to me,” said Rivera. “My brothers, my parents, my wife – they’re always cheering me up, regardless of my competition results. They help me to become not only a better athlete, but a better person.”

Katy Lopez for the IAAF