Crouser building the foundations for a return to competition

Ryan Crouser has long been a handyman. Since hanging out in his grandfather’s work shed as a youngster, the Olympic shot put champion has had a keen interest in DIY and he recently called upon that passion to build his own shot circle.

“I’ve always liked building and I enjoy that feeling of completing a task, stepping back and being proud of what I’ve built,” explains Crouser. “I enjoy the process of building and problem-solving – I like working with my hands.”

Building is clearly in Crouser’s DNA. Both his grandfather and great-grandfather worked as carpenters, and during his college years Crouser built his own furniture.

After earning world silver last year with a stunning PB of 22.90m – a distance which elevated the US shot putter to joint fifth on the world all-time list – Crouser returned home and started a sizeable DIY project.

Taken aback by the fact quality hardwood furniture was priced at about $2000, he took it upon himself to build a dresser.

“I thought, ‘I’ve done a fair amount of woodworking in the past, I can build my own dresser’. I sourced the materials and built the dresser from scratch.”

Devoting more than 100 hours to building the 34-inch tall and 60-inch wide dresser was no easy task. So much so that Crouser jokes his girlfriend had doubts whether it would ever be finished.

However, he was good to his word; he worked steadily at the project and was pleased with the final product.

“I was happy with the way it turned out,” he adds. 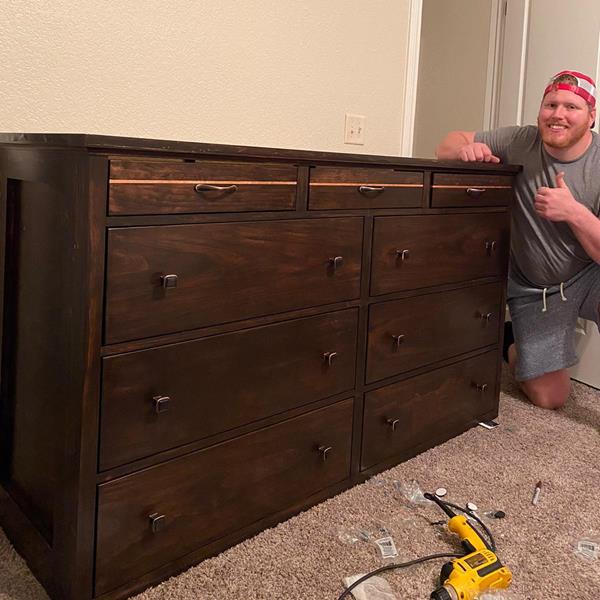 Despite a relatively short period of preparation, the 27-year-old Arkansas-based thrower produced an outstanding performance to claim victory at the US Indoor Championships in February, hurling the shot out to 22.60m to come within six centimetres of the world indoor record and climb to second on the world indoor all-time list.

Yet the Covid-19 pandemic and the changing circumstances brought about a rapid re-evaluation of his approach to training which necessitated calling upon his DIY skills to build his own shot circle.

As Arkansas went into lockdown and the University of Arkansas facilities were closed to the public, he adds: “For me, to build a shot circle was kind of necessary. I had an 18-metre long garden, which was not big enough so I ended up building the circle in two days.”

Cutting the circle from two sheets of three-quarter-inch thick plywood and cutting out the area for the toe board – which was supplied by Gill Athletics – he describes the building process as fairly straight-forward.

Training up to four times a week on an empty grass field at the back of an elementary school close to his home has proved the ideal set up to ensure he has maintained his throwing rhythm during lockdown.

DIY shot put circle build. A fun afternoon project that I hope can get some athletes back throwing again. A big thanks to @gillathletics1918 for the toe board! #shotput #discus #athletics #nike #nikeathlete #trackandfield #diy

And although the circle is about a foot narrower from left to right than a standard shot circle, Crouser insists this has brought advantages.

“It has been good for me because I have a tendency for my left foot to move to the left of the toe board, so training in a narrower circle has ensured I have to have my feet lined up rather than wandering off balance to the left, which I have a bad habit of doing.”

Training with some gym equipment from the home, the giant thrower believes he has used his training time in lockdown productively and has done the best that he can in the circumstances.

It is hard to predict when Crouser will next return to the competitive arena but in the meantime he has targeted yet another DIY task: building a headboard and bedframe.

“I’m looking at something that is going to be good quality and can hold my 320-pound bodyweight,” he adds.

“The building always helps take my mind off throwing and is not especially taxing on the body,” he says. “It is good way to clear my head but it also still feels like I’ve had a productive day.”