Morris out to attack Isinbayeva's meeting record in Brussels

This will be a year to savour for Sandi Morris, regardless of how the rest of her career turns out, after getting silver medals at both the IAAF World Indoor Championships Portland 2016 and Rio 2016 Olympic Games.

However, this year’s outdoor world leader isn’t finished yet and wants to hit even higher the heights at the IAAF Diamond League final in Brussels on Friday (9).

Winning the Diamond Race is basically beyond Morris – Greece’s Rio 2016 champion Ekeaterini Stefanidi has a big enough lead that she only has to turn up to take the Diamond Trophy and the $40,000 first prize –  but she wants to make a point and improve on her world-leading height of 4.93m and into the bargain take the meeting record that has stood to Yelena Isinbayeva since 2005.

“I am ready to erase Isinbayeva’s marks. A new generation is ready to replace Isinbayeva, and that starts Friday night during the AG Insurance Memorial Van Damme.

"The meeting record of 4.93m is exactly my outdoor personal best mark and the (outdoor) American record. I want to smash these on Friday and I’m in the shape to do so. If I succeed I’ll sing a song for the whole stadium,” she joked with local reporters.

The King Baudouin Stadium is used to US musical acts of a certain vintage bringing proceedings to a close at the famous meeting in the Belgian capital – the notable turns in recent years have included the Village People and Gloria Gaynor, to name just a few – the sight of Morris taking the microphone would be something to behold.

Her one small worry though is that the talented guitarist and violinist might have to guide the backing band through her chosen tunes.

“I definitely need to start bringing my guitar on all my trips, I could use it here in Europe!” she commented on Twitter after realising that she might very well be called out on her quip to the local Belgian media.

Morris certainly has the talent to vault much higher than her current personal best – although she cleared 4.95m indoors in March to become the third best vaulter ever under any conditions – as anyone who saw the Rio final can testify.

Her soaring clearance at 4.85m, followed by a narrow failure at 4.90m which could otherwise have clinched her the gold medal, certainly had the type of height which could make her the next female vaulter to go over the halcyon height of 5.00m, despite obvious rivals to achieve such a feat like Stefanidi and prodigiously talented New Zealand teenager Eliza McCartney, who took the bronze in Rio.

No regrets at near miss

Her vault at 4.90m had a huge amount of daylight above the bar and she only nudged it off the uprights with her knee on the way down, giving the gold to Stefanidi on countback after a costly miss at 4.70m.

Nevertheless, she was far from disappointed at the outcome.

“Being an Olympian and winning a medal was more than I could dream of, taking in to account that I had to quit from training for 6 weeks with a broken wrist (after her pole snapped at the IAAF World Challenge meeting in Ostrava on 20 May, after winning the opening IAAF Diamond League meeting of the year in Doha).

“I feared not being able to participate in the Games. The doctors told me that I was only going to be able to pick up a pole just a week before the (US Olympic) Trials and that's what happened. In these circumstances, qualifying was a huge accomplishment; so then win an Olympic medal, it's more than I expected.

“Of course, I am a competitor and it was a pity that the bar dropped in my last attempt. It was a good one (attempt) and I thought that I had crossed the bar, it didn’t feel as if I’d touched it. It has given me the confidence that it is my turn to win the gold in Tokyo, because I could almost taste the gold in Rio.”

In recent weeks, although she has had very little time at home in Fayetteville in Arkansas, she has become a local celebrity.

"When I walk my dogs and I go to the supermarket, people want to take a picture with me. It's nice. I was recently invited to a local primary school (Butterfield Trail Elementary) and 500 enthusiastic children were there to see me. One of them even cried when he could touch my silver medal."

If she can clear 4.94m or higher on Friday, the sky’s the limit as far as her profile is concerned. 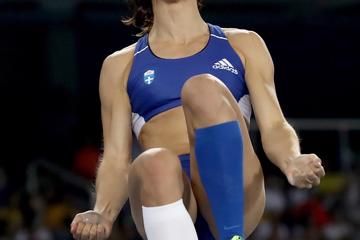 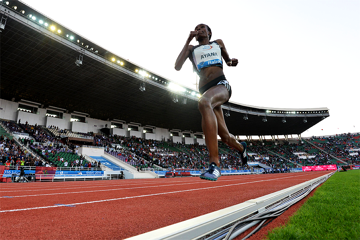 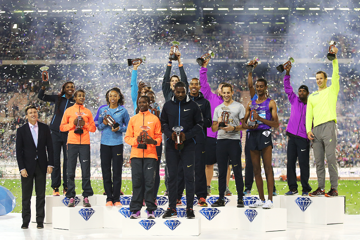 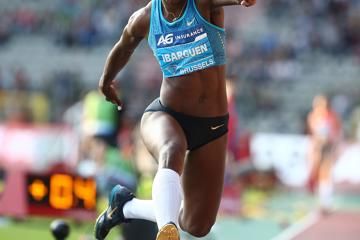