From the roads to the track – and back again – there seems little that can quell the success of the lady we have come to regard as the queen of distance running: Tirunesh Dibaba.

The 31-year-old Ethiopian claimed her sixth world medal in the women’s 10,000m final on Saturday night, crowning a glorious return to the domain she once ruled with such majesty.

At a press conference in central London on Monday, Chicago Marathon race director Carey Pinkowski announced this year’s race will feature Dibaba, gold medalist in the women’s 10,000m at both the London 2012 and Beijing 2008 Olympics, and the Ethiopian said she intends to break records.

“I’ve always been building to marathons,” she said. “I want to use my 10k foot speed and make history (in Chicago).”

That was her first-ever marathon. The potential is tantalising.

“Paula Radcliffe, Joan [Benoit] Samuelson,” he said, the latter referring to the first female Olympic marathon champion, “Tirunesh is on a different level. We want the best runners in Chicago on October 8th.”

For over a decade, ever since her emergence on to the world stage at the IAAF World Championships Paris 2003, where she took gold over 5000m at the age of 17, Dibaba’s story has inspired runners all over the world.

“It was a very fast race,” Dibaba said afterwards. “If I had followed (Almaz), I would have faded.”

The lead-up to Saturday’s race was shrouded in mystery. Dibaba and Ayana were the favourites yet neither had run the 10,000m competitively in 2017.

In fact, the 25-year-old Ayana chose to rest for 11 months after her world-record and Olympic triumph in Brazil. As dominating as her race was Saturday, it was nonetheless almost a full minute slower than the 29:17.45 she ran in Rio.

Dibaba, meanwhile, had already had to deal with the transition from the 10K to the marathon, and becoming a contender in Saturday’s race required stepping back down and sharpening her speed.

“My training for this race,” said Dibaba, “was very short.”

With Kenya’s Agnes Jebet Tirop claiming bronze in a personal best of 31:03.5, all three women underscored East Africa’s dominance in the event.

Dibaba, however, represents more than just track to Ethiopia. Her national presence on and off the track is a beacon lighting the upward mobility of her nation’s women.

She has spoken before about her humble beginnings.

“We didn’t have much,” said her mother, Gutu. “A loving environment and milk was enough.”

Dibaba was born in the high-altitude village of Bekoji. Though the thinner air provided a training advantage, other factors surely got in the way of her path into elite-level distance running.

Dibaba is a living example of the massive progress for Ethiopian women in both professional sport and industry. She publicly demonstrates entrepreneurship to her fellow countrywomen, founding the esteemed Tirunesh Hotel in the Ethiopian capital Addis Ababa.

Investments like Dibaba’s have spurred healthy economic growth in Ethiopia, peaking at 10.8 percent GDP growth in 2005, according to a 2017 World Bank study. In addition, her hotel investments created nearly a thousand local jobs, according to the Ethiopian Business Review.

“We intend to expand our investments,” said her husband Sileshi Sihine, a silver medalist in the 10k at the Athens and Beijing Olympics. “It will help us, but also our country.”

With increased economic growth, educational funding for places like Bekoji can surge.

When Dibaba was born, female educational enrollment in primary school lagged at 32 percent, according to the same government survey. Nowadays, that number is nearly doubled at 61 percent.

She doesn’t claim to be a trailblazer. She credits that to her cousin Derartu Tulu, Olympic 10,000m gold medallist in Barcelona 1992 and Sydney 2000.

“We are lucky to have her go first,” said Dibaba, referring to Ethiopian women seeing her iconic cousin’s international success. “I emulate her. I strive to be her.”

Her cousin carried the torch first through much adversity, and Dibaba sees her continued role for the future.

“I want to be an icon in athletics,” she said, “but also in business for the women in my country.”

Pinkowski sees the potential selling power through her talent and story.

“She’s one of the great ambassadors in track,” he said. “We want American runners to see her and be wowed.”

Sam Dodge for the IAAF 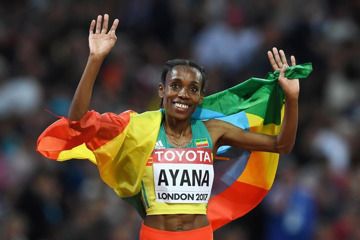