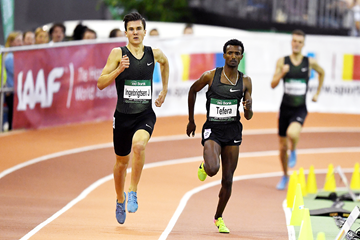 Eight things we learned from the 2019 indoor season

All of the big indoor meetings for 2019 are now in the books and, with the IAAF World Athletics Championships Doha 2019 on the distant horizon, athletes are already starting to turn their attention to the outdoor season.

So now is a good time to ask: what did we learn from the 2019 indoor season?

At the end of a record-breaking season for the 1500m and the mile, no clear-cut dominant figure emerged. Ethiopia’s Yomif Kejelcha had arguably the best series of marks, topped by his world indoor mile record of 3:47.01, but he was beaten in Birmingham by his 19-year-old compatriot Samuel Tefera, who clocked a world indoor 1500m record of 3:31.04.

Tefera himself was then beaten a few days later by Norwegian wunderkind Jakob Ingebrigtsen at the IAAF World Indoor Tour meeting in Dusseldorf. And then Marcin Lewandowski – 13 years Ingebrigtsen’s senior – got the better of the teenager to win the European indoor title in Glasgow.

The outdoor season could be set to continue in much the same way. The Ethiopian duo seem keen to chase fast times while Ingebrigtsen and Lewandowski will be big factors in any tactical races. Add to the mix the likes of world champion Elijah Manangoi and IAAF Diamond League winner Timothy Cheruiyot, and the 1500m will become an even more exciting and wide-open event on the outdoor circuit this year.

2. Athletics has a new superstar in the making

…and his name is Grant Holloway. There has been much buzz surrounding the University of Florida student for the past year or two, but the 21-year-old produced his best performance to date at the recent NCAA Indoor Championships.

Having already taken the bronze medal in the long jump one day prior, he won the 60m hurdles in 7.35 to move up to third on the world indoor all-time list. He followed it 40 minutes later with a 6.50 victory in the 60m to complete the best ever indoor one-day 60m/60m hurdles double and he rounded out his championships by taking bronze in the 4x400m.

Holloway could have a long 2019 campaign ahead of him because the first sixth months of the year will be filled with collegiate competitions before turning his attention to the US Championships and then, potentially, the IAAF World Athletics Championships Doha 2019. But if anyone has the ability to pull it off, it’s Holloway.

Boosted by a partisan crowd, Laura Muir became the standout performer at the European Indoor Championships when she successfully defended her 1500m and 3000m titles. She ended her indoor campaign with world-leading times for 5000m, 3000m and the mile, the second-fastest time in the world for 1500m, and an 800m PB of 1:59.50.

Unassailable on the boards! 🙌 A look back at @lauramuiruns’ double double at the European Indoors.#ThrowbackThursday pic.twitter.com/UXnCcPnTlA

But it was the manner of her victories in Glasgow – with unmatchable speed over the final 200m – that suggests 2019 could be the year in which she finally lands a major global title.

The men’s 400m hurdles became one of the biggest talking points of the sport in 2018. Abderrahman Samba, the No.1 world ranked athlete in the event and overall, didn’t compete indoors this year, but two of his biggest rivals did.

Hurdles or no hurdles, there's no beating Karsten Warholm at the moment! #Glasgow2019 pic.twitter.com/k5Tda4qSch

World 400m hurdles champion Karsten Warholm made a last-minute decision to enter the European Indoor Championships. Not only did he come away with the gold medal, he also equalled the European indoor record with 45.05. Meanwhile Rai Benjamin, the third-fastest 400m hurdler in history, gave a glimpse of his current form when winning the 300m in Boston in a PB of 32.55.

Samba will be one of the biggest home stars of the IAAF World Athletics Championships Doha 2019 but if the recent indoor season is anything to go by, he may not have it all his own way.

In terms of depth, the women’s pole vault enjoyed one of its best indoor seasons to date with five women clearing 4.81m or higher, eight topping 4.73m or better, and 37 vaulting 4.50m or above.

The last month has been great for pole vaulter Anzhelika Sidorova!

What made it more exciting, though, was the unpredictability. Katie Nageotte won the first IAAF World Indoor Tour meeting in Boston, there was a three-way tie for first place in Karlsruhe between Anzhelika Sidorova, Katerina Stefanidi and Alysha Newman, Sidorova won in Madrid and Dusseldorf, then Holly Bradshaw took the spoils in Birmingham.

With the event so competitive, it’s only a matter of time before there are one or two new members of the exclusive five-metre club.

It’s not unusual for host countries to experience an upturn in performances leading up to an Olympic Games and Japan is no different in that regard. Most of their medal prospects for Tokyo 2020 appear to be in endurance events, but high jumper Naoto Tobe showed that Japan will have someone to cheer for in the field events too.

In an unbeaten indoor campaign, the 26-year-old upped the Japanese record to 2.35m in Karlsruhe and then went on to win in Banska Bystrica (2.33m), Birmingham (2.29m) and Dusseldorf (2.34m). This year’s World Championships will be an important stepping stone for Tobe as he prepares to impress on home soil next year.

The Venezuelan will pick up her rivalry with Ibarguen during the outdoor season, but it might not be just a two-woman contest. Spain’s Ana Peleteiro won the European indoor title with an outright PB of 14.73m, while over in Cuba Liadagmis Povea sailed out to a wind-assisted 15.05m.

It could take a 15-metre leap just to make it on the World Championships podium in Doha.

His 22.33m at the Millrose Games was the best indoor throw for 11 years and moved Crouser to fourth on the world indoor all-time list. His 22.22m winning effort at the US Indoor Championships two weeks later showed that he is as consistent as ever when it comes to hitting the big throws.

Ryan Crouser at the 2019 US Indoor Championships (Kirby Lee) © Copyright

World champion Tom Walsh decided against travelling to Europe or the US to compete on the indoor season and instead opted to stay at home in New Zealand, where he has started the year with a series of strong results, topped by a 21.70m victory at the National Championships.

Once the two men line up against each other – something that happened nine times in 2018 with Crouser just getting the edge, 5-4 – expect even bigger distances from both.