With a magnificent front-running performance – sealing a historic double-double at 1500m and 3000m – Scottish heroine Laura Muir (1500m world rank: 1) electrified the home crowd in Glasgow to provide a fitting climax to the European Indoor Championships on Sunday night (3).

In the 49-year history of the event, no one had accomplished two consecutive doubles at 1500m and 3000m, but Muir did not just complete that task – she did it with such astonishing ease that it seemed hers is a talent now poised to dominate at global level in the years ahead.

In the women’s 1500m final she stamped her class on the race from the outset, coasting at the front with her rivals too timid to try passing her. Instead they deferred to her dominance, Muir winding the pace up from 600 metres out, her rivals left with no answers as she powered home all alone in 4:05.92, four seconds clear of runner-up Sofia Ennaoui (1500m world rank: 6) of Poland (4:09.30). Ciara Mageean (1500m world rank: 17) from Ireland took the bronze in 4:09.43.

“I´m definitely going to sleep well tonight,” said Muir. “This was a big test this weekend and a lot of pressure. I am so happy that I could deliver. We set out to do just one event a few months ago and then we thought why not go for the double. I never thought I’d have another chance to do that in Glasgow and to do it on my own track is special.”

“I decided beforehand that I wanted to just focus and go to the front and at the end I had to keep pumping my arms and turning my legs,” said Oskan-Clarke. “I was just pleased to get over the finish line.”

There was an upset in the men’s 1500m, where the dominance of Norway’s Jakob Ingebrigtsen (1500m world rank: 8) was halted by Poland’s Marcin Lewandowski (1500m world rank: 13), the Pole reversing placings from last year’s European outdoor final and scoring one for the (sort of) older guys. The 31-year-old powered past the 18-year-old Ingebrigtsen at the bell and never relinquished the lead, coming home a well-deserved champion in 3:42.85 to the Norwegian’s 3:43.23. Spain’s Jesus Gomez (1500m world rank: 31) took bronze.

Ureña unleashed a furious kick to leave his rivals training in the concluding 1000m, clocking 2:44.27. Earlier in the day he put himself firmly in command with a 5.20m clearance in the pole vault and a clocking of 7.78 in the 60m hurdles. Given his superiority in the final five-lap event, he felt the full pressure to deliver the gold.

Jorge Urena in the heptathlon 1000m at the European Indoor Championships

“I was really nervous, but I received huge help from my family, friends and fans cheering from the tribunes. I was hearing their voices and that was pushing me forward,” said Ureña. “This is wonderful.”

“What I like about high jumping is battling in competitions and being the best,” said Lasitskene. “I felt it was a very good performance in a great atmosphere.”

“My dream has come true,” said Babayev. “I trained hard for this moment – six months of training for this one competition, this one night. And I did it.”

“I was really nervous but I’m used to dealing with that,” said Visser. “This means the world to me.”

“I hit two barriers very, very hard when I was running, and I took a tiny look to my right while finishing and there were just too many bodies around, so I lay on the ground annoyed at myself,” said Trajkovic. “Then I saw my name on the board and thought, ‘oh, cool’.”

Ivana Spanovic in the long jump at the European Indoor Championships

“I came here for first position and I wasn’t going to leave happy any other way,” said Spanovic. “I knew I could make seven metres easily, but I made a lot of mistakes. I kept waiting and waiting, but in the end I didn’t need it.”

“It's so special,” said Peleteiro, whose nickname is Kangaroo Girl. “After two foul jumps, my coach (Ivan Pedroso) said, ‘just do it’ and then I knew I could do it. It was difficult, especially in my head, but I told myself: ‘just enjoy it’.”

Greece’s Miltiadis Tentoglou (long jump world rank: 8) added the European indoor title to the outdoor crown he won last year in the men’s long jump, the 20-year-old announcing himself as a genuine contender at global level with victory in a world-leading 8.38m, which was also a Greek record.

“I knew I could jump well but I just needed to find my rhythm and get my run-up right,” said Tentoglou. “Finally I did that with my fifth jump.”

“This medal is for all the Bulgarians who supported me. It was about time I got first place,” said Mavrodieva. “I have hoped for this title for many years.”

Poland reigned supreme in the women’s 4x400m, their quartet of Anna Kielbasinka, Iga Baumgart-Witan, Malgorzata Holub-Kowalik and Justyna Swiety-Ersetic a class apart from the outset, coming home clear winners in 3:28.77 ahead of Britain (3:29.55) and Italy (3:31.90).

Belgium won a thrilling men’s 4x400m in 3:06.24 ahead of Spain, who produced a national record in second with 3:06.32. France took third with 3:07.71. Julien Watrin was the sole non-Borlee on the Belgian quartet, joining brothers Dylan, Jonathan and Kevin to seal a memorable gold. 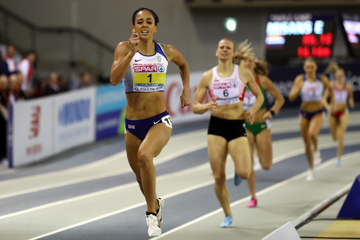 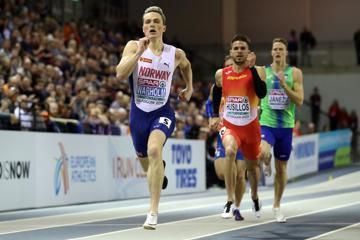