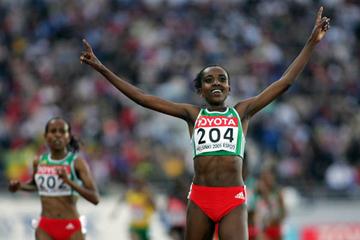 Helsinki, FinlandLess than five months ago Ethiopians celebrated the double gold medal victory of Tirunesh Dibaba at the World Cross Country Championships in France. Tonight they are celebrating yet another double but one of infinitely more importance, unique in World Championship track history.

Dibaba attacked with three hundred metres remaining in the women’s 5000m final at the 10th IAAF World Championships in Athletics, and then held off teammate Meseret Defar in the homestretch to set a championship record of 14:38.59. On Monday night she had struck gold in the 10,000m in convincing fashion. Behind three of her teammates filled the next three places tonight.

“I expected a very slow race because it was a championship but the Chinese girl Sun Yingjie accelerated the pace and contributed to the championship record,” Dibaba told journalists, adding later “The race was a little bit fast but we were hoping to take the first four places. That was what I was thinking.”

There wasn’t much doubt that an Ethiopian would win the gold medal.

The question was how much did the 10,000m take out of her. But the Ethiopian team had returned to their training base in Addis Ababa following the Rome TDK Golden League meet. They checked into the Wabe Shebelle Hotel. They ate together and focused entirely upon preparations for these championships. A chartered bus would take them into the surrounding hills at 2900m altitude or to the Jan Meda cross country track where head coach Tolass Kotu nurtured them.

Still Dibaba admitted to having had doubts of her own despite her outward confidence both before the race and during it. With three laps remaining she had taken the lead but instead of surging she slowed the pace as if to force someone else into the front. The field almost tripped over themselves. But it was a masterful plan to make sure that she wasn’t leading until the crucial time.

“Yes we had planned to keep exchanging the lead so I slowed down hoping that one of them would take over from me,” she explained. “But I guess they weren’t able to.”

In praise of Tulu

The Dibaba sisters are cousins of Derartu Tulu the 1992 Olympic 10,000m champion - Ethiopia’s first female superstar who will line up for Sunday’s  Marathon. They were also born in Arsi province in a village called Chefe. It is located at roughly 3000m altitude. Now they live together and with other relatives in a house they have had built in Addis Ababa.  Dibaba paid tribute to their cousin at the post race press conference.

“When I go to competitions she always advises us and I take her advice." said the newly crowned champion. “I haven’t spoken to her tonight but after I won the other day she was very happy.  We were together.”

“Derartu was the primary inspiration for us entering sport and it was by watching her and hoping to follow in her footsteps that we took up the sport. As far as others, I believe they will get additional encouragement from us.”

Now that the double is behind her she reveals plans to tackle the World record of Elvan Abeylegesse (14:24.68), the Ethiopian who now runs for Turkey. Dibaba ran 14:30.88 a year ago - a World Junior record. But though she may well be in shape for such a task there are other factors involved. Like, where next to race. Her agent Mark Wetmore as announced earlier today has negotiated to include her in the Sheffield Super Grand Prix meeting.

“It’s nearly impossible to find a pacemaker who is fast enough for these girls,” says Wetmore. “Sheffield, a lot of it is about the weather. It’s really a major consideration. If she is there and the weather is good and she wants to try for it, I mean after watching her, here I don’t think there’s anything she can’t do.”

Wetmore says Dibaba,  who it must be mentioned is still only 20, has been taking English lessons since the World Cross Country Championships and understands much more than she lets on. One day she will be comfortable addressing the press without a translator. And that will be welcome news to the scores of journalists, not to mention meet officials, who scramble around looking for an Amharic interpreter whenever she runs. Welcome news indeed.